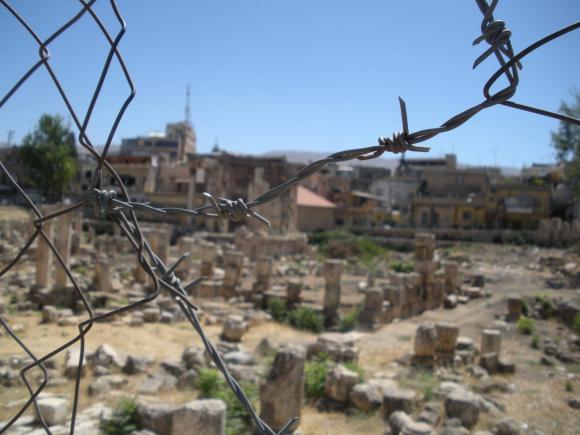 It takes half a day to get to and from Beirut to any other city in Lebanon. For the north coast buses depart from Doura. For the West or the South Sea, you have to reach Cola which is not a drink but a hub of the capital. Getting on a minivan to Baalbeck in the Bekaa Valley costs € 3 in Lebanese pounds. It takes two hours to arrive.

On the steep hills behind Beirut the sea becomes a distant blue strip. An hour and you get to Chtaura, building of buildings, banks and hotels. Remember an Italian village condoned quickly. From the square the road goes to Masnaa and to Syria which is 15 km.

Once down from the hills, it is already Valle della Bekaa and the green cedar that dominates the coast becomes wheat yellow.

The check points of the Lebanese army are increasing. Sandbags, barbed wire and white-red bins appear as the national flag. Many French-made VABs and M113s, visible here and there also in Beirut.

The Bekaa Valley is a growing blaze of yellow-green flags. Coldiretti has nothing to do with it. The drapes are those of Hezbollah, the Party of God and agriculture, with the exception of excellent wines Ksara, Massaya e Chateau Musar products between Chtaura and Zahlé, it does not matter much.

Far away, in fact, the flags of Hezbollah and Coldiretti resemble. Close up, less. Just see the portraits of leaders scattered everywhere to distinguish contexts.

The air is calm, but the calm in Lebanon smells of trouble. Israel is still the devil for everyone, as he laughs for the Falange of the Lebanese Falange. Among the Maronite Nationalist Front and Hezbollah's Shiites, hate is more ancient than the civil war of thirty years ago. Now the grudges are obscured by the weather and watch over the more or less neutral eye of 'Armée libanaise.

"Honor sacrifice and loyalty" reads the motto of the Beirut's armed forces. On honor and sacrifice, nothing to say. Given the complexity of the recent and recent history of the cedar country, the concept of loyalty remains suspended.

The absurdity of Lebanon is that with instability you live up to that point to look normal. It is as if the parameters of coexistence have a different calibration than any society that lives in peace.

As a consolidated custom, geography here depends on politics. The valley de facto is administered by Hezbollah. The rich, French and Christian strongholds are on the north coast from the parts of Jounieh. By air, there are only a few airplanes.

Syria is one meter away and Lebanon's Syrian schools (those remained) are not studied as a state for themselves. On Lebanese cards, however, Israel lacks. From Shot Down, there is Palestine written. It's a typical Arab fashion. Everyone omits what he wants ... 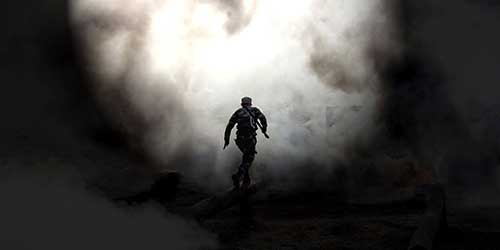 Everywhere portraits of Syrian President Assad. In the Bekaa Valley, which was also affected by Israeli raids in January 2015, identification with Syria and hatred for Israel and America is very strong. More for Israel, though. Resentment for America eases a little thanks to the myth of well-being, deeply rooted among the Arabs, among the Lebanese in particular.

Now it's all hanging by a thread. The flows of ideas, people and things are regulated by war alongside. The same production of cannabis, which has always made the area a world in its own right, is the result of events.

It is the fate of Lebanon, a wonderful land where the thought of the future comes to a maximum of one day.

Baalbek is the largest Roman Forum in the world after that of Rome. It is virtually intact and you enter with £ 7 in sterling. Very few tourists arrived before the war in Syria. Now it's all surreal. Children's strokes try to place them souvenir of Hezbollah, between the market and their sincere smiles.

The influx of refugees from Syria is enormous. Out of the city many areas are forbidden. You do not understand what's happening right now. Some parked M60 however recall the heavy weather. The idea is that the F 16 Israelis return from one moment to the next and that it is not easier to leave from here. When Hezbollah exaggerates, hunters arrive. 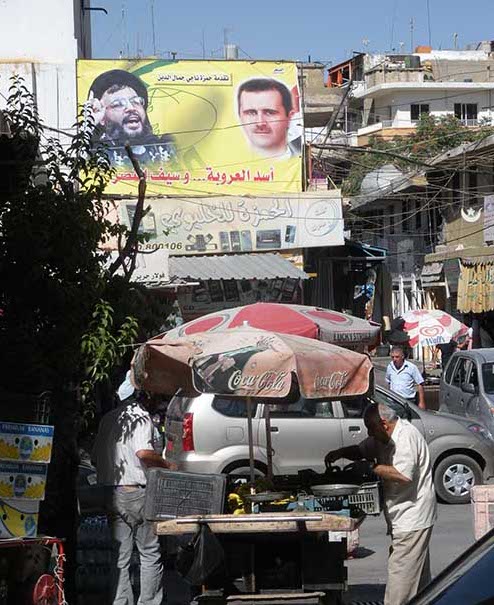 Or that the sorting of refugees (the real ones) from Syria continues and the departure of militiamen to fight alongside the regular Forces of Damascus and the Shabiya, the Alawite mavericks who do dirty work for the Damascus government. ISIS is upon us they say or perhaps already beyond. The Shia majority here have eaten the leaf and don't believe in fairy tales. In addition to the extremist Sunnis, there is more, but in the daily absurdity, everyone goes about their business and prepares for war. As always.

There is silence now in Baalbeck. A silence that takes the name of the ancient Phoenician god Baal and that eaves history at every step. Ancient columns and military columns coexist. Drinking a coffee at the little bar in front of the Roman ruins makes it both of them. It is a fascinating image before returning to Beirut.

An image that smells of steel, dust, and death. Everything can happen, even if everything remains as it is.

Nothing more, nothing new from Lebanon.

The return to the capital is another Lebanon already seen. In Hamra, the west part in Muslim theory, in Gemmayzeh, the east part in Christian theory, in the cafes of Place d'Eotile, in the downtown center of everything… everything runs smoothly as always. Beirut, its people, its bistros, are more of Europe than Europe itself.

Seen from outside Lebanon seems more. Living it inside is another thing. From the educational fatalism of people jogging on the Corniche, between the splendid sea and a parked armed Humvee, we understand everything. We understand a lot about the Middle East.

Everything exists, everything can happen, everything might end. Considering the absurdity as normality is the only key you can to keep on living.