Syrian Diary. Cap.1: The gutter in the dark 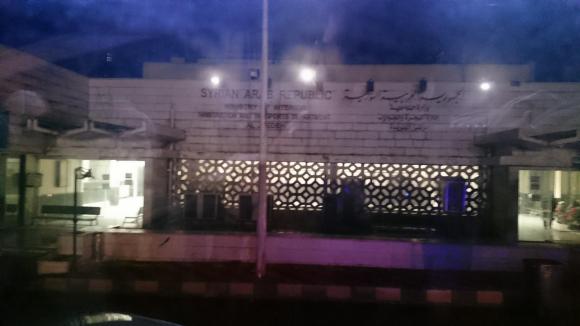 Consistent with choosing to tell you the countries only through field experience, we are in Syria!

The security system, stiffer after Russian intervention, makes it impossible to enter the press, except on rare occasions. We joined a group of Italian volunteers and we were able to enter land from Lebanon. We want to tell how things are in a country brutalized by the war and the international media. The truth here, nobody tells you.

Almost night. The road between Beirut Hariri Airport to Damascus leads to nothing. Leaving the traffic, life and luxury cars of the Lebanese capital steeply climbs up to Chtaura, a large junction east where we had already passed (see article). The sun falls quickly behind us, then when the coast disappears everything becomes dark and begins to be cold, very cold. It is the most eloquent image of the war.

We have two hours and we are at the frontier. The inscription on the white building recalls that Syria is an Arab country. Inside, the light and the electric heating are intense. Border guards and security officials are talking under a huge picture of President Assad. Out of the way, it goes from the artificial heat to the burning of woodcarvings of the Syrian garta. The place is surreal: a warm and illuminated oasis in the black night without lights.

The network of street lamps installed in the middle between the two lanes of travel, is thick but turned off. On the sides dark and frost: in January, the cold between Lebanon and Syria always becomes snow.

From the frontier we cross or rarely overtake a vehicle. Along the way, camouflage soldiers and light shoes emerge from time to time. When the headlights of the car pass they are swallowed again by the night.

The temperature is below zero. After half an hour of silence from the dark cloak of nothing, the first homes are seen and the lights gradually increase. But not enough: we are in Damascus.

We have some control posts between obscured and soldiers and we come in front of the hotel entrance (for security reasons we can not tell which one).

Two months ago a mortar bomb fell right here: three dead. In order not to miss anything, on a façade there are the signs of a previous rocket grenade.

The thing worries: a mortar shot has a range of a few kilometers. RPG a few hundred meters. It means the war has passed here next door.

It is nightmare by now. From the window of the hotel you can see houses. We are in Damascus, Syria.