Home geopolitics Report From the Ukrainian front - cap.2: One day to Do ...

From the Ukrainian front - cap.2: One day in Donetsk 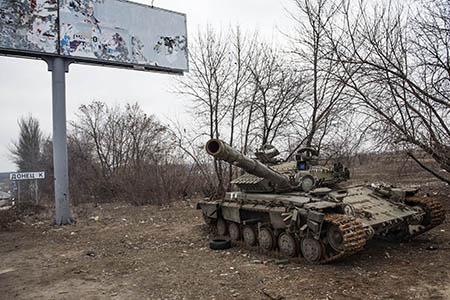 Sleeping with light isn't easy. With the flashes of mortars then, even less. The windows vibrate, it seems the storm. The difference between a storm and artillery is basically that artillery is valid even in good weather. In the morning it is better, you can even go out. The front line passes in the suburbs towards the airport.

People get rare and give way to more dense bombs: houses, pylons, a nursery school, the 58 School ... everything has broken down. As a soundtrack there is always the echo of distant artillery. A bit 'monotonous but keeps company.

In Donetsk, the Ukrainian government does not provide more pensions. In fact it is an admission of defeat and withdrawal from the territory. The elders who remain to live in the rubble campano as it comes and with the help of the pro-Russian soldiers of the Donbass. In the area there are those of the Skorpion, a unit equivalent to a battalion, according to Russian standards.

Check the documents and establish trust, it is not difficult to make friends. They are young and almost always mother's children. There is also some son of 'ndrocchia though. They are the oldest and the most experienced. Many of them under the camouflage wear the telnjaška, the Russian striped shirt symbol of the elite.

You sleep in groups in basements-bunkers. Virgin Mary with Child Jesus on the wall. Food, weapons, stink of mold and gunpowder. Food and food remains everywhere. Bread, jam, venison in gelatine and Russian salami are strong. Nothing, however, pulls more than vodka. Guarantees a certain homogeneity at the front. Even in the morning, more water flows.

When vodka comes along with weapons, prodigies happen: you can do the shooting without beating yourself looking for targets. It's a way of optimizing resources. Who knows what those who invented the bottles would think ...

Between laughter and dry words, first it is the PK with a tripod, then the classic AK47. Some RPGs stand on the corners, but they stay there and the building in front of them breathes a sigh of relief. I have a feeling that the ammunition in Donetsk is not a problem ...

Ride with the boys trotting among the houses: shoulder weapons, cigarettes and stray dogs. There are so many not enough as a mascot for all the Donbass soldiers.

There is a market, perfect for shopping. Soldiers enter armed with the ease of those who do it often. The lady treats them like children. Maybe so. If there were other customers and the shelves were full, it would seem like an ordinary day. A bit 'strange to be honest, but still ordinary ...

Around, between sidewalks and crumbling buildings, Donetsk is a still image. Up until a year ago it was any big European city good for the Champions; now it is light years away from the clumsy abulia of the West, where we get angry for an iPhone 5, rather than 6.

With an old Lada we move away running like crazy. Drive a certain V. which is believed Ayrton Senna. Traffic does not exist, but the risk of crashing is at least as high as that of Ukrainian grenades. I do not have time to remind him of the end of Ayrton that we arrive at an outpost to leave the pappa to the soldiers.

Vodka helps to understand each other but a photo would be enough to break trust and romance. All around in the meantime, nothing ravaged.

I have time to hear some demonstrative blow just to split the eardrums and then away, faster than the light, for other positions between slave voices, young faces, crosses of Sant'Andrea del Donbass that remember those Southern Secession War. Even in Ukraine after all, of secession it comes ...

You return to the base. Who cleans a weapon, who sleeps, who smokes, who tells me about his children.

Night tour to the sniper pigeon house. It is at the 15 ° floor of a building under construction. It's evening and the lights are not there. If there were, they could not be turned on. A man understands the importance of a helmet only when he bangs his head half a dozen times ...

Inside the station A. is the sighting and D. the shooter. D. claims that his Makarov reaches 2 km. Perhaps it is my vodka; maybe it's his; perhaps it is true.

We climb on the roof for a touristic view of the front line. Even with infrared binoculars it is impossible to see Ukrainian positions. We need to wait for the glare of the artillery to orient ourselves, but also not.

We return to the subscale. He sleeps among various stinks, numbed by everything but a strange euphoria.

To understand the war, the next morning, just meet an elder. In the night, a Grad grazed his home and thrust himself unexploded into the ground. He does not care and wanders like a ghost. 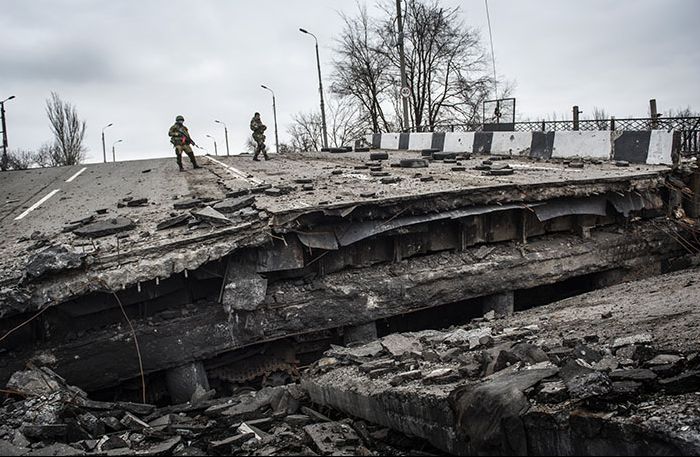