Home geopolitics Report From the Ukrainian front - chap. 4: The agreements of ...

From the Ukrainian front - chap. 4: The Minsk agreements seen by a tank 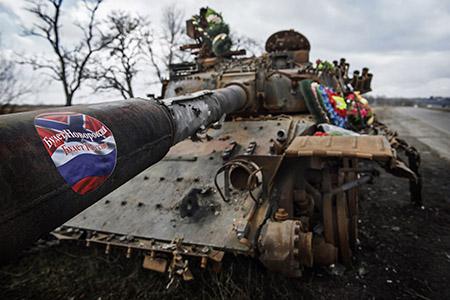 Road between Luhansk and Debaltsevo. It is the northern part of the Donbass, now all pro-Russian. In front of the carcass of a T 72, things are better understood. Touching the greased mesh of a track shows that the war is really dirty and that the steppes of the East are not cold only for Tolstoy. The grease and frost of the metal parts give a good synthesis of the climate: in front, a slice of gray and damp asphalt; on the side, yellow and black brush, the color of the tank.

The faces and voices that have passed here remain in the air, with no more life. Around it, there is a bloated silence.

The destroyed tanks are the remains of a Ukrainian armored division. They recognize themselves because they are not adorned with flowers like those "friends", often war prey ripped right by the Kiev forces.

Two Ural pass in the direction of Luhansk with the cross of Sant'Andrea. Perhaps they are the Cossacks of Pavel Dremov. In this sector they are defending the borders of New Russia, the federation of all the separatist territories. The trucks raise dirty water from a puddle, greenish like the camouflage of soldiers.

Walking through mud and the remains of destroyed weapons accelerates your thoughts. Gloves, wool, short cigarettes, green zuccotti ... Everything is winter, even when spring comes.

In Ukraine, many things are learned about the cold, some bad others less:

it retains the decomposition of bodies and stinks, making the war in Ukraine better than elsewhere.

it keeps the snow for longer, which melted on the stoves, guarantees water supplies to civilians.

This is also the war.

Once the lorries are gone, the greasy and metallic frost of the tracks returns.

That there is no such thing as a European foreign policy, even asylum children know it. There was no need for war to understand it.

To get to the truce in Minsk, France and Germany went to speak with Putin, but in their own right. The first because it has links with the Russians far beyond the Atlantic axis; the second because if Europe were a game of trump, Merkel would be the ace.

London was missing as usual. On some issues the Foreign Office has been making its own affairs since Elizabeth I. The United Kingdom, little inclined to the continental routes, has raised its voice with Russia more for duty than for conviction, avoiding to share the umpteenth diplomatic defeat of Washington after Syria 2013 and Crimea 2014.

Italy was also lacking in talks. That Italy that hosted the Treaty of Rome but that does not fall among the EU powers with big balls. That Italy, however, has managed to occupy the most envied position with Minister Mogherini since man invented the positions to be envied: that of the High Representative of the Union for Foreign Affairs and Security Policy. In Brussels only three titles are more coveted:

To understand what High Representative means, linguistic and semantic studies are needed. One of the most credible hypotheses is that it is equivalent to a sort of head of diplomacy in the European Union, but without a diplomacy of the European Union. A bit like eating pizza without pizza or going to the cinema without a cinema.

It matters little though. On the road between Luhansk and Debaltsevo the rhetoric, titled or not, still counts little.

The cease-fire in force from the February 15, is all in the carcasses of tanks scattered around. They are the remains of the battle of Debaltsevo where the Ukrainian army surrendered abandoning a monstrous amount of material. Now all the 180 km separating Luhansk and Donetsk are firmly in the hands of the soldiers of New Russia.

According to the Cossack officer A., ​​the February 18 together with the Ukrainians en route, there were many Western infiltrators. Probably there was not a massacre for this and that in turn he turned a blind eye on the intervention of the Russian parades of 106a. Not to be excluded that their BMD have already started quietly from Deblacevo, to return to Rostov, just beyond the border. Who knows ...

In Minsk, without even saying it, perhaps we have talked about this too. Diplomacy is subtle art and at the same time it is practical.

Now the heavy weapons are silent almost completely. More than an application of the Minsk agreements, it is a sigh of relief for the civilian populations, for months affected by the Ukrainian artillery.

At the front one shoots, but discreetly. Kiev licks the wounds and the pro-Russian people are enjoying the goal achieved: not so much the military to have unified the front, as to leave an entire country in the balance. It was the one that held most of Russia, obliged to keep the game open to avoid the final goodbye in Kiev.

At the same time, the titled diplomacy observes and tries to understand.

Both the 72 T-tracks are still here, greasy and icy like the air I breathe around. 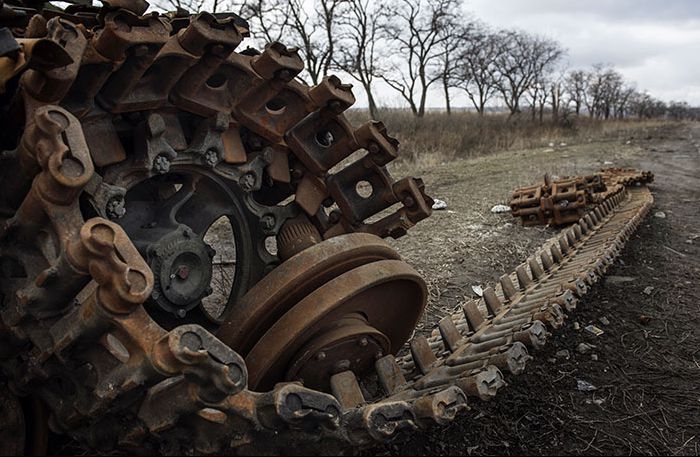