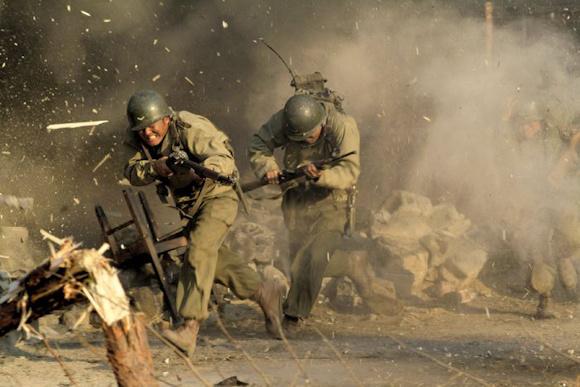 In 2004 the film "Taegukgi Hwinallimyeo" was released in cinemas, first in South Korea and then in the rest of the world, variously translated into English as "Taegukgi: The Brotherhood of War" and in Italian: "Brothers of War - Sotto two flags ”but which, wanting to respect its original meaning, should be translated as“ Waving the Taegukgi ”, whereas the“ Taegukgi ”is both the flag of South Korea and the“ flag of the Korean race ”at the same time.

The use of the term "race" in this case is not improper because Koreans, just like the Japanese, Chinese, Mongols and other peoples of East Asia, do not consider themselves a "people" or a "nation", but a real "race", distinct from all other races in Asia and in the world in general.

For those who have never seen it, "Taegukgi Hwinallimyeo" (opening frame) is an exceptional film, not only from an artistic and filming point of view, but also for the mastery with which director Kang Je-gyu has managed to represent the tearing effect that the "Korean War" had on the Korean people, allegorically represented by the two brothers protagonists of the film, Lee Jin-tae and Lee Jin-seok, played respectively by South Korean movie stars Jang Dong-gun and Kim Do-jin, aka Won Bin.

That the Korean War from a war point of view and the horrors associated with it was no joke, few people ignore it. Officially begun on 25 June 1950 and ended with a weak armistice, signed on 27 July 1953 in the Panmunjom area, the Korean War completely devastated the Korean peninsula causing over 3 million deaths (with a proportionately number of civilian victims higher than that of the Second World War and the Vietnam War). 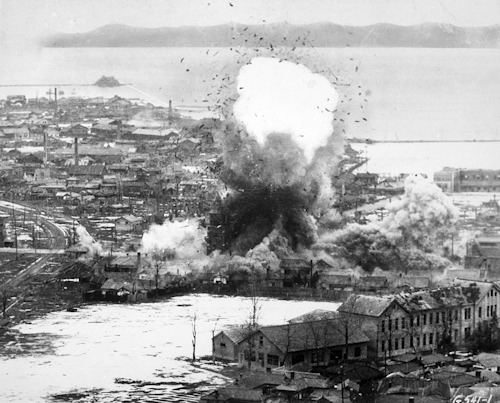 The ferocity of both the military operations at the front and the political repression in the rear led to the destruction of almost all the cities of the peninsula and the carrying out of thousands of heinous massacres. The effect of the carpet bombing carried out against the territory of North Korea was such that, at the end of the hostilities, not a single building remained standing in the whole northern half of the peninsula. It is therefore not surprising that, from then until today, the two geopolitical entities forged by the flames of conflict: the Democratic People's Republic of Korea, also known as North Korea, and the Republic of Korea, commonly known as South Korea , have remained divided by a furrow of rivalry (not to say hatred) that time has not in the least scratched since the official propaganda of the two sides (especially in the north) has never stopped representing "the Armistice of Panmunjom" as an aberration, a sort of "Carthaginian Peace" that defrauded the contenders of the possibility of obtaining the final victory on the field and arms in hand together with the long-awaited reunification which, since then, has become a sort of obsession for resident Koreans on both sides of the “De-Militarized Zone” (DMZ).

This speech takes on particular significance especially today, in 2020, because despite the global pandemic of Covid-19, both in North and South Korea, the ruling elites and the people celebrated, each in its own way, the seventieth anniversary. of the beginning of that fratricidal war. And that the legacy of those years has not passed at all, the leaders of North Korea thought about it, staging in the course of June 2020 some of the worst provocations in a few years now, when men of the North Korean special forces, it seems carrying out an order that came directly from "Supreme Leader" Kim Jong-un or his sister Kim Yo-jong, they entered the "De-Militarized Zone" by blowing up the "Inter-Korean Joint Liaison Office" located in Kaesong industrial district, actually deserted for years. The response of the Seoul authorities was not long in coming and South Korean President Moon Jae-in, internationally known for his moderate positions, this time unsheathed his claws stating that no violation of the sovereignty of the Republic of Korea will be tolerated and that the forces South Korean armed forces are ready to resort to violence at any time to ensure the safety of their fellow citizens. 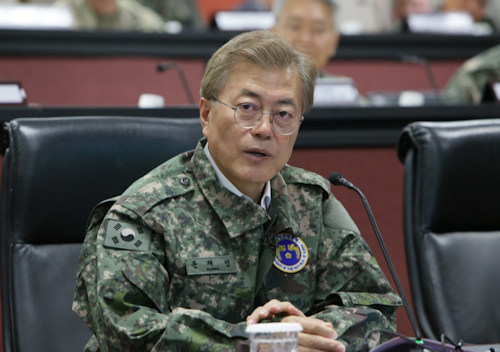 Here it is necessary to open a very important parenthesis because, although Moon Jae-in has cleverly built his reputation as a "moderate" thanks to his smiles and hugs with his North Korean counterpart Kim Jong-un, it must absolutely be made clear that he does not he is neither an imbecile nor a man without a backbone. Before distinguishing himself in the legal field and subsequently devoting himself to political commitment, Moon Jae-in made a career in the armed forces, in particular in the "Special War Command", ie the branch of the South Korean army that controls the "Special Forces".

Despite being conscripts, like all other soldiers, the men of the "Special Forces of South Korea" serve for 4 years and 3 months under the flag, unlike 1 year and 9 months of almost all the other soldiers. The training of operators is among the most rigorous imaginable and it is not at all uncommon for some individuals to die from injuries, trauma or from cold and hunger.

In his time, Moon Jae-in successfully passed through this ordeal by taking leave of the rank of sergeant and it is almost certain that he also participated in high-profile actions directed against the threatening northern neighbor as his military records were secret and they will still be for several decades. Not only that, during the Korean crisis of the years 2017-18, the president ordered the massive expansion of the "Special War Command" to the current level of 10.000 men and authorized the creation of a sub unit (the 13th brigade) trained and specifically charged with assassinating the North Korean leadership in the event of a war outbreak.

Also to Moon Jae-in we owe the revision of South Korea's national defense strategy according to which, in case of war, the country would massively use its arsenal of short-range ballistic missiles equipped with a disruptive conventional warhead and consisting of missiles Hyunmoo-1, Hyunmoo-2, Hyunmoo-3, Hyunmoo-4 and ATACMS directly against the North Korean capital Pyongyang in order to level it and reduce it to a pile of rubble. 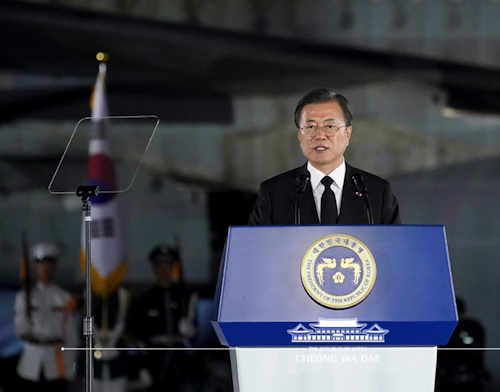 We are therefore faced with an individual who, despite his apparent kind and polite manner, is endowed with strong nerves and is well aware of the geopolitical value of "deterrence". In short, what would be called a "steel dove" or a "tame-looking tiger".

However, Moon Jae-in's true masterpiece is embodied in his speech on June 25, 2020 (photo) on the occasion of the commemorative event of the anniversary of the outbreak of the Korean War. At this juncture, the South Korean president formally invited North Korea to sign "a peace treaty" that definitively sanctions the end of the war between the two Koreas that can thus live in peace, side by side, as collaborative neighbors.

Although pacifists around the world and even many Western leaders rejoiced to hear these words, Moon Jae-in's speech in Pyongyang brought a cold sweat to the whole "Hermit Kingdom" nomenclature because his is equivalent to through and through to a declaration of war! This may seem counterintuitive but it is good to remember that, from 1953 to today, the elites of the two enemy republics (especially in the north) have managed to remain in power justifying the immense military expenses and the perennial state of tension over the fact of illegitimacy. of the existence of "the other Korea" and that the geopolitical regime currently in force on the Korean peninsula is only of a transitory nature, until the day when the peninsula will once again be unified and free from external influences, be they Chinese, Russian, Japanese or American . To use a slogan that is particularly dear to Korean nationalists in the North as well as in the South: "For a united, strong and prosperous Korea". 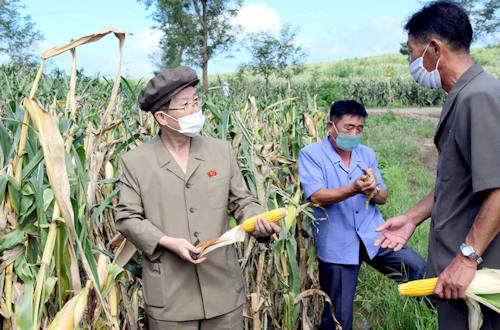 In a masterly move, Moon Jae-in has "used the dove of peace to pave the road to war". The North Korean leadership in fact cannot accept the peace treaty proposal in any way, which is why it will blow up all talks and bring the Korean peninsula back to the brink of tension. However, in this case the South Koreans will have the entire public opinion and international organizations on their side because no one will understand the real reason for the work of North Korea and the leaders of Pyongyang will find themselves isolated and supported in a minimal and reluctant way by a China. and a Russia already heavily tested by both the economic crisis and the Covid-19 pandemic.

Although the Korean conflict is far from its conclusion, all observers and analysts should never forget that, even the waters of karst rivers, sooner or later emerge on the surface and all the knots are hopelessly to roast.

Photo: still from the film "Taegukgi Hwinallimyeo" / USAF / US Army / (Korean) Office of the President / KCNA

The international situation is evolving rapidly and there is no country that does not have to adapt. In an area of ​​course ...
7312
Read

The vote in the UN Assembly of the motion condemning Russia's aggression against Ukraine has ...
3129
Read

Wars are not only fought on the battlefield but also on agricultural fields. The world is witnessing a ...
1473
Read

The rise of China as a global economic and geopolitical superpower has heightened tensions and concerns about ...
3287
Read