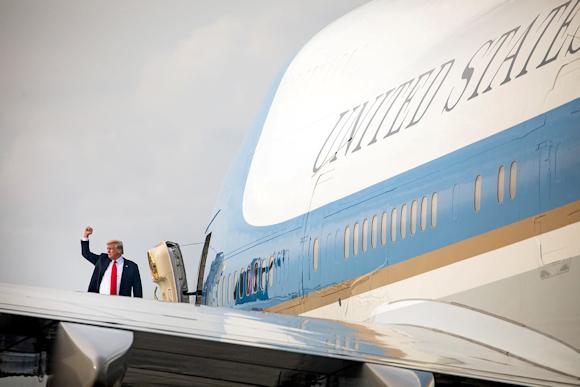 The summit held in Singapore, net of the official iconography, presents several aspects of geopolitical character that, in all probability, will influence the evolution of Asian regional relations. The April meeting between the two leaders of North and South Korea had already anticipated the main issues, namely interstate cooperation, area stability, easing of sanctions and, above all, denuclearization, all topics of particular complexity which, at that particular juncture, could only lead to joint declarations with assumptions of commitments of principle.

Beyond the hype, the next meeting between the US and North Koreans was neither conclusive nor decisive; while confirming an apparent relaxing intent in the relations between the two countries, it can not be said that the two leaders effectively prevailed over each other. While it is true that Kim Jong Un, in light of President Trump's statements, seems having been the most skilled in the raises, it is equally true that China was the real power capable of weaving the political plot of the meeting with the aim of directing its results.

Xi Jinping, the third party only physically absent, has focused first on the stability of the Korean peninsula as an appendage of mainland China, a stability capable of avoiding the ruinous collapse of Pyongyang, still an indispensable buffer between the Dragon and the Americans beyond the parallel 38 ^, both to guarantee a valid barrier to Kim's nuclear ambitions.

At the Singapore summit there have been two meetings between Kim and Xi, first in Beijing and then in Dalian: it is difficult not to imagine the extent of the moral suasion exercised by the Red Prince, skilled in exercising an effective influence on the decisions of the Great Sun of the 21st century. Also the conclusion of the summit took place according to mandarin script, with one double suspension both the American and South Korean wargames, and the conduct of nuclear tests to the north.

But how much did the emerging power of the Dragon weigh on American fiction? Much, certainly more than the North Korean nuclear capacity, so much to induce economic compensations - commercial compensatory, suitable to remind Xi who still holds the actual Sea Power. 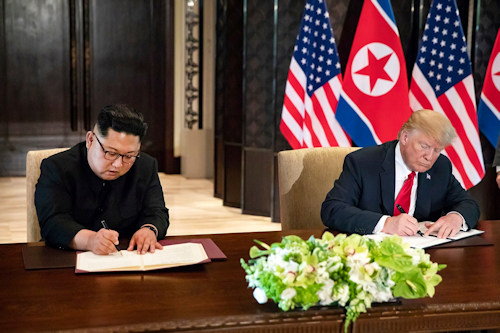 A contact point, however, that leaves however unsolved the great geopolitical issues, first of all a real peace treaty that sanctions the end of the Korean War, and the establishment of effective diplomatic relations not only between the US and North Korea but with much of the international forum, which is a process of normalization that is continually interrupted due to repeated nuclear tests. The classic joint statement drawn up at the end of the works, in fact, even if projected to lay the foundations for a negotiation useful to guarantee the North Eastern Asian context from nuclear risks, makes the technical diplomatic action entrusted to the sherpa that they will now have to find ways to make political statements feasible, especially in light of the inevitable and mutual concessions necessary to make a long-term program materializable.

The biggest bumps concern the controversy of denuclearization and above all the assurance of the estate of the North Korean regime, never so in need of guarantees against a possible internal political upheaval.

The failures achieved by the previous American administrations, responsible for a guilty party Appeasement bipartisan, also given the North Korean positions, do not lead to favorable auspices given that, among other things, the extent of the interpretation that the two presidents will want to give to the eventual process of dismantling the nuclear capacity of the Hermit Kingdom.

Let us therefore return a moment on "mutual concessions"; It can not be excluded a priori that the acceptance of a North Korean nuclear downsizing does not lead to a strategic US withdrawal from the area and therefore to the end of the protective deterrence of Japan and South Korea.

In what terms could Washington "rethink" its presence? Not considering a withdrawal possible tout court, it must be considered that even a possible downsizing of US forces would lead to the need to redesign the regional balances. The relations between China and North Korea, where they are deprived of any ideological superstructure, lead us to believe that more than an alliance we must therefore speak of a reluctant coexistence, of a mutual but often poorly tolerated convenience. From a geopolitical point of view, there is no doubt that North Korean aggression has created more of a problem for Chinese diplomacy, since it has been able to reignite in the region a dangerous and generalized arms race, supported and sponsored by the USA, or the commercial competitor capable of raising tariffs that are more than ruinous and able to arouse pressure and influence close to the Chinese borders, thanks to the commercial relations with neighboring countries that, although conditioned by the Chinese economy, can not stand the hegemony. 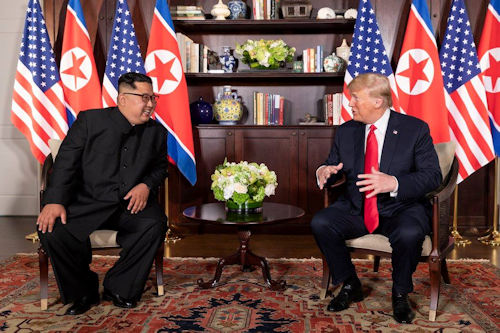 In short, there has been an inversion of a political tendency on the Chinese side, a discreet but incisive behavior which, on the one hand, made North Korea understand what it means to be suddenly deprived of its tutelary deity, and on the other has conducted negotiations that, in the game of concessions and offsets, indirectly allow the Dragon to take advantage of the lightening of the sanctions regime; the eventual North Korean openness to external relations would allow Beijing to enjoy the political and economic opportunity to try to advantageously vary the regional equilibrium, relying on the recognized leader of a sovereign state and no longer in a ban, a State that could be guided according to the dictates of Xi's socialism.

Where North Korea had in the past managed to unite a negative political convergence even among historically adverse nations (China and Japan), now instead a socialist country projected towards modernity and the future according to Chinese dictates could contribute to the revision of the balance general of the area.

What would China earn then? A hypothetical recalculation of the American military presence, resulting from the Singapore summit, would allow the Empire of the Middle to make minor claims for its strategic spaces in the South China Sea.

So far, the US Navy has dissuaded China from proposing it too assertively, but a change in the balance of power could lead to a consolidation of the strings strategy, with US expulsion from the region. Lower American deterrence, greater Chinese assertiveness.

But can one be sure of such a marked US acquiescence? Difficult, far more feasible is a hypothesis that sees Washington as a possible North Korean trade partner, considering the fact (accepted by the Americans) that denuclearization could be anything but obvious; therefore nothing abstruse in hypothesizing a US diplomatic operation aimed at supporting the Hermit Kingdom in anti Chinese key; this possibility, however already stigmatized by some magazines, however, clashes with other forecasts which, on the contrary, tend to include North Korea as the feasible "station" of the path of the New Silk Road.

However, a conclusive analysis can not disregard the assessment that, to date, the US continues to hold both the control of at least 80% of the shipping routes on which the commercial traffic and the Chinese hydrocarbons transit, and the junctions and Straits of Malacca, Sonda and Lombok, with an enviable diplomatic advantage: that of being able to count on the support of most of the countries in the area, unwilling to replace their economic interest with the strategic one. The Americans, on the other hand, now have to negotiate an evolution of the North Korean nuclear program without being able to count on that prevalence, erroneously taken for granted, of the more prosperous and "controlled" South.

In Korea, despite the summit, the game does not seem to have ended, indeed. More than ever now, it seems more than open even when other actors, like Russia, enter the scene, and with a view to resumption of the regional arms race. 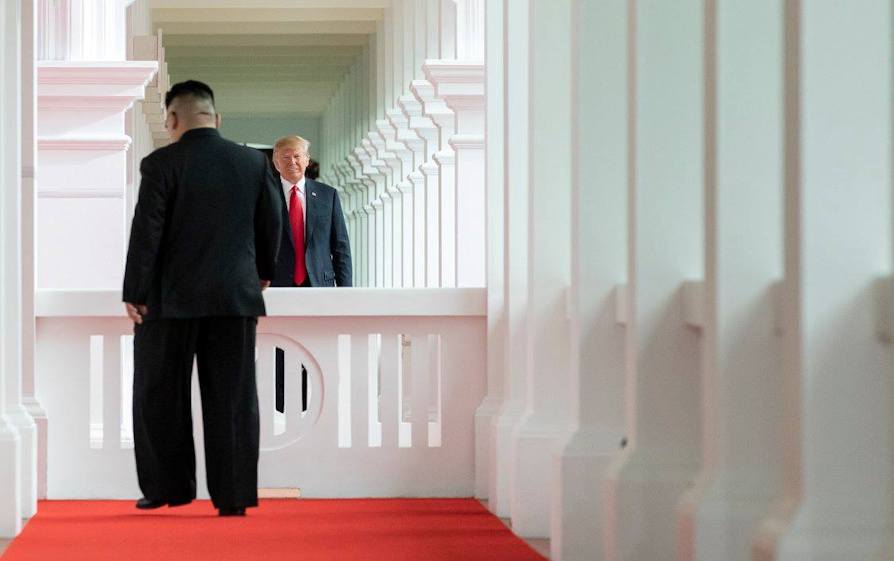 Many people wonder what the big countries and big organizations have concluded in Berlin ...
567
Read

The Berlin conference, called to settle the Libyan question, presented itself with a program, unbalanced to ...
13512
Read

On what happened on the night of January 3 as for the record there is little to add. What matters is the ...
1472
Read

The foreign policy of any country is, or should be influenced by history, culture and psychological aspects ...
3726
Read

Do you remember when in October in an article (v.link) we talked about the "intelligent design" that the major powers ...
3245
Read

A few hours ago the council of dignitaries and wise men of the Turcophone enclave of Misurata rejected the visit of the ...
6175
Read

The Sahel occupies an immense strip of territory, a transition area between desert, savannah, equatorial forests and ...
2215
Read

When the Egyptian rackets will stick to the Turkish (tennis) balls, Ankara and Cairo (as well as Washington and ...
8735
Read

The Palazzo della Civiltà Italiana was soaring towards the sky celebrating heroes, poets, saints and navigators, but without ...
2086
Read 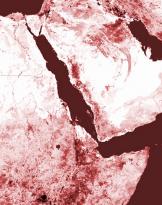 Unlike generalism, which only emphasizes trends, geopolitics leaves nothing out and also analyzes this ...
1882
Read