Home geopolitics Analysis Rethinking the Middle East with the help of Ra ...

Think of the Middle East with the help of Ralph Peters 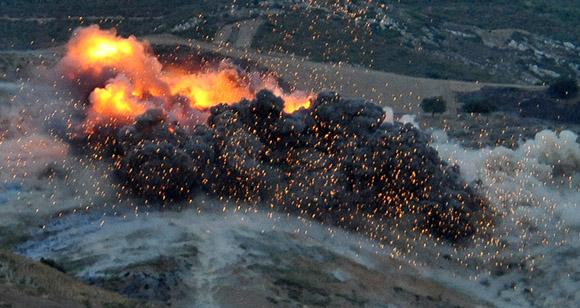 What we are witnessing in the Middle East is only the latest development of a conflict, yet another, within the Muslim world; the evolution of a crisis caused by factors not only religious but also and above all of a geopolitical nature.

It is the failure of an artificial political system, originating from the Sykes-Picot treaty with which France and England (with the backing of Russia) underlined, at the beginning of the last century, the respective zones of influence.

Situation well known to those dealing with geopolitics by study or simple interest, amplified in the last twenty years by the phenomenon of growing Islamization, which since the years 70 has invested all Muslim states from Algeria to Indonesia, in reaction not to modernity (as one would be led to believe), but to the process of westernization itself.

A failed state system - we were saying - as a hetero product, which an American scholar, Ralph Peters, proposed about ten years ago to review with an interesting analysis that today deserves to be (re) read carefully (v. 2006 article).

Peters, noting that Islam itself, but the boundaries drawn by European interests during the nineteenth century, is how most of the problems of the states placed in the crescent that runs from Lebanon to Pakistan, south of the Black Sea and the Caspian Sea , concluded that without a drastic realignment of this frontier the (geo) political order could not be re-established.

Reasoning therefore on the impossibility of satisfying all the ethnic-religious components present, he drew up a map that found the right collocation at least to Kurdi, Balucchi and the Shiite Muslims, minorities these considered fundamental to restore peace in the area. 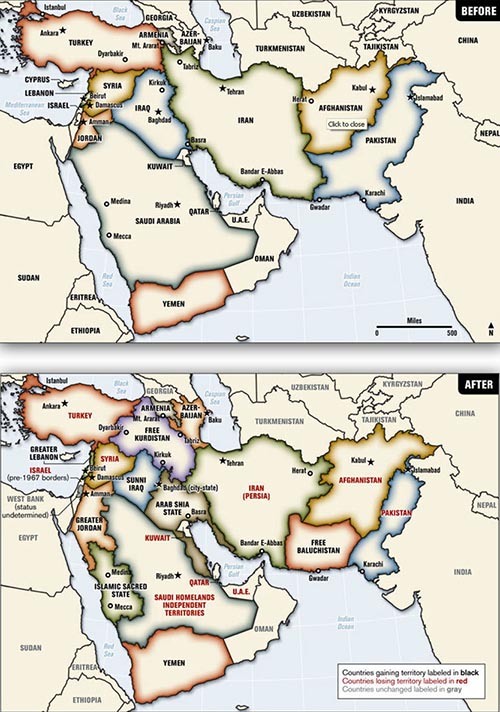 In other words, he imagined a "new" Middle East, replacing the current one, this time respectful of the "anthropological" differences - and therefore ethnic, of tradition, of religion of language - of the (main) people who live there, though not in able to please all minorities present, such as Christians.

A new geopolitical structure, therefore, capable of revolutionizing the geographical maps as we know them, with the appearance of new states and the modification, in a reductive and extensive sense, of the current ones, and with a State of Israel re-entered the borders of the 1967.

a Sacred Islamic State, a sort of Islamic Vatican comprising Mecca and Medina, ruled in rotation by a Council of Islamic schools and movements belonging to all denominational addresses;

the Free State of Baluchistan born from the fusion of Shiite territories of Baluch ethnicity of Iran and Pakistan;

a State of Free Kurdistan, including the territories inhabited by some 30 million Kurds, now in Turkey, Iraq, Syria and Iran;

The creation of the new state entities, together with the redefinition of those remaining according to a principle of ethnic-religious equidistribution, would take place at the expense of some states and with the gain of others.

Here, as a memorial I limit myself to indicating the main territorial changes:

Saudi Arabia, in addition to losing the sacred territories (constituted as an autonomous state), would cede areas to Jordan, to Yemen (the predominantly Shiite north-western coastal ones), and to the newly established Arab Shiite state, the coastal ones;

Iran would lose some territories with homogeneous ethnic characterization for the benefit of Azerbaijan, free Kurdistan, the Arab Shiite State, and Baluchistan, gaining the province of Herat, in present-day Afghanistan, akin to Persia by language and history;

Afghanistan, for its part, would lose Western territories to the advantage of Iran, acquiring new ones north-west from Pakistan, thus favoring the unification of ethnic groups which are now separate.

Peters' idea, which before leaving the active service had worked for years in the US Department of Defense, immediately found wide echo - and probably not a coincidence - in the statements that the then US Secretary of State, Condoleezza Rice, pronounced in the aftermath of the Israeli invasion of southern Lebanon in the 2006, when he declared that he was witnessing "the birth pangs from which a New Middle East would arise".

It goes without saying that such a distortion is far from being achieved in a painless way, and today would risk adding blood to the blood.

However, the scholar's proposal should not be taken as a mere academic exercise; rather as a perspective around which to rethink the geography of the area in the medium to long term, with a view to broadly sharing the parties involved.

It may not be a vain exercise, thinking it over, because observing the current Iraq with its three ethnically homogeneous parts (Kurdish, Sunni and Shiite) - unthinkable ten years ago - and comparing it with the map proposed by the American scholar, it would seem that his article, all this time, someone has read it thoroughly. 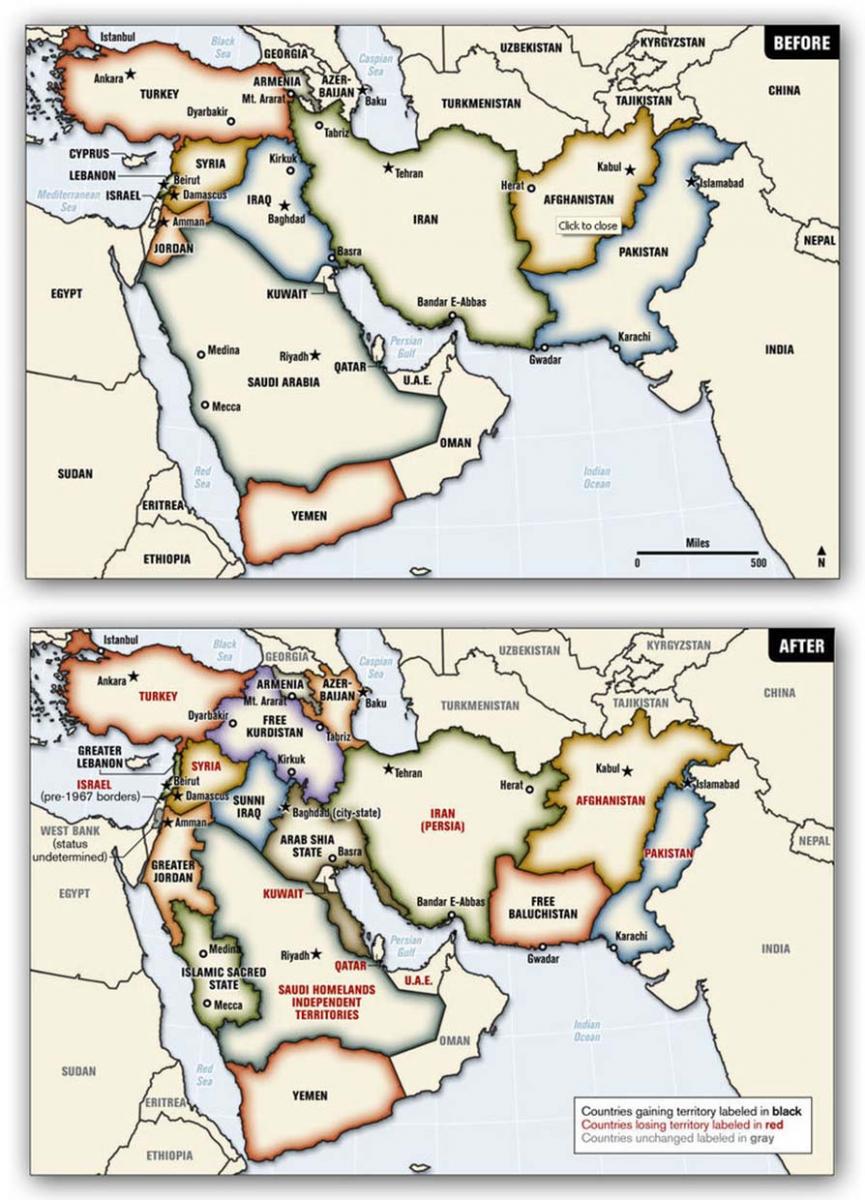 Why all this hype against the US-Iran crisis? Most men and grants from the ...
852
Read