Home geopolitics Analysis Qatar, there is more than football 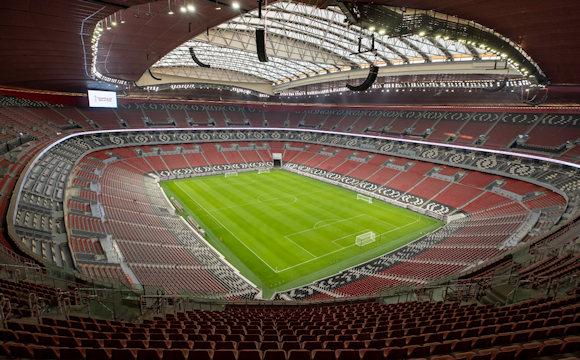 While the football world championship is underway in Qatar, many voices have been raised against the very rich emirate for various reasons: from the obscure resumption of the awarding of the competition (which took place in 2010), to the violation of the rights of foreign workers involved in construction sites for the championship, to the limitations of civil and personal rights to end up with the indiscriminate killing of dogs. And this without the pathetic justifications of FIFA and the support obtained by the Arab League Summit in Algiers in early November (both forced, and as such, totally hypocritical).

However, these allegations, already serious (and known for some time), do not fully illustrate the ambiguous policy of the emirate. For years Doha has begun a policy of visibility and penetration at an international level, focused on securing the benevolence and attention of the international community, corroborated by enormous financial resources, disproportionate purchases of armaments of all kinds and of high sophistication (and cost…) , participation in international military operations, such as the overthrow of the Gaddafi regime (press reports cited the raid of Qatari special forces on the large Bab al-Azizia complex in Tripoli).

It could be observed that the choices of Qatar and its frenetic search for visibility is an obligatory response to a set of weaknesses that would make it attractive: cumbersome neighbors animated by hegemonic yearnings, small territory, scarce population and lack of national identity, important energy resources (Qatar is the fifth world producer of natural gas after the USA, Russia, China and Iran, with 177 million m3, as of 2021 data, while oil production has decreased to 1,8 million barrels per day with a trend to further reductions).

Especially the availability of natural gas has allowed the international community, especially the states that purchase it, to pass over the dark areas of the governance of the emirate in silence. As always "pecunia non olet" and sermons on human rights are addressed only to some (and never others). 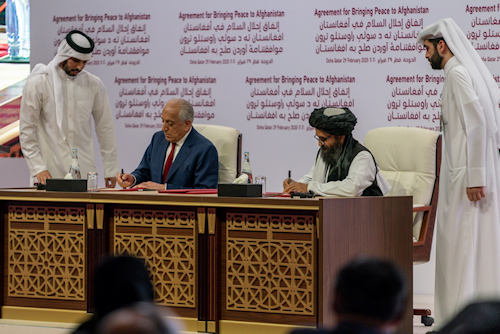 In its multifaceted diplomatic activity, Qatar has hosted the talks and agreements (photo) between the Trump administration and the Afghan Taliban (which led to the shameful flight from Kabul), but at the same time continues to host the dialogue sessions of the negotiations in Chad, for the Great Lakes region and South Sudan, sponsored by the UN.

At the same time an increasingly strong opposition to the hegemonic aims of Saudi Arabia and its satellite states (UAE, Kuwait, Bahrain) has begun within the GCC (Gulf Cooperation Council), but also within the Arab League and the OIC (Organization for the Islamic Conference).

Qatar's participation in the Riyadh-led coalition to face the victorious Yemeni forces of Shiite obedience has increased the gap between Doha and Saudi Arabia, which was coupled with the rivalry between these two nations in the sponsorship of the various Syrian anti-government militias in the civil war that has devastated the country of the Levant since 2011 and which has seen the progressive rapprochement of Qatar to Turkey and Iran.

In 2017 this polarization reached extremes prompting four Arab countries – Saudi Arabia, the United Arab Emirates, Bahrain and Egypt – to sever diplomatic ties with Qatar, after that in the summer of that year, even in the face of heavy losses suffered, withdraws from the coalition engaged in the war in Yemen. These nations have accused Qatar of supporting various terrorist and sectarian groups aimed at destabilizing the region, including the Muslim Brotherhood group, Daesh (ISIS) and Al-Qaeda, constantly promoting these groups' plans through its media, supporting activities of Iranian-backed terrorist groups in Qatif governorate, Saudi Arabia, and Bahrain, funding and hosting them and using the satellite channel Al Jazeera as a megaphone of their messages. The same year, the four Arab countries placed 59 individuals and 12 Qatar-based or Qatar-financed organizations on a terrorist list. The four countries also expelled Qatari nationals and closed all their borders to Qatar, banned broadcasts of the (state-owned) TV channel Al Jazeera. The Saudis have accused Qatar of "embrace various terrorist and sectarian groups aiming to destabilize the region, including the Muslim Brotherhood group, Daesh (ISIS) and Al-Qaeda..." and such was the animosity that Riyadh had even contemplated building an artificial canal to transform the emirate from a peninsula to an island. 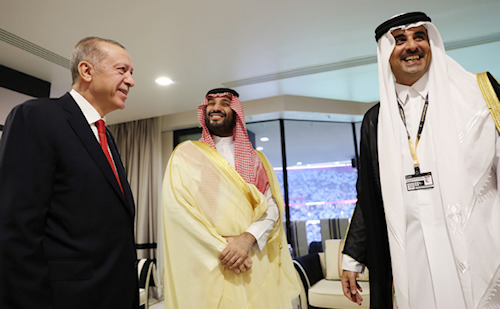 Cooperation with Turkey has been very important for Qatar, which sees in Ankara an insurance against possible Saudi military raids.

To face the threatening isolation, Qatar has consolidated its ties with Turkey, a long-time protector of Muslim Brotherhood and in stormy relations, albeit for different reasons, with both Saudi Arabia, Egypt and the United Arab Emirates.

In October 2015, the Qatar-Turkey Combined Force was activated, headquartered at the Tariq bin Ziyad military base outside Doha, initially with around 300 Turkish servicemen, later increased to 2.000 and then 5.000; to these were added visits and exercises by air departments (and an uninterrupted flow of food aid when the embargo and the closure of airspace began) and in that case there was talk of an Ankara-Teheran-Doha axis. This situation dragged on until the beginning of 2021, with the reopening of land borders with Saudi Arabia and air and sea borders with the other GCC nations (with the exception of Oman, which had not bowed to pressure Saudi Arabia and has never severed relations with Doha).

Alongside the assurances provided by the fickle Erdogan, the other major guarantee of security for its integrity, Qatar has found in the USA. The USA maintains important air assets there and, until 2020, also a land military presence (later transferred to Jordan).

How this fits with the financial support that Qatar has long given to Hamas and other radical Palestinian groups, many of whose leaders are hosted on the small peninsula, remains unclear, also in light of the fact that in July 2021, the State Department of the United States has launched an investigation into Qatar's alleged support for the Corps Pasdaran, the Islamic Revolution Guards Corps (defined by Washington in 2019 as a terrorist movement).

After more than three years of harsh embargo (political, logistical and economic), Qatar has resumed relations with the GCC countries and Egypt. The formal occasion for the reconciliation was the Kuwait summit of the regional organization in January 2021 which, although part of the group of countries hostile to Qatar, had acted as an intermediary between the two parties (and not as boasted by the Moroccan press, "from Rabat"). 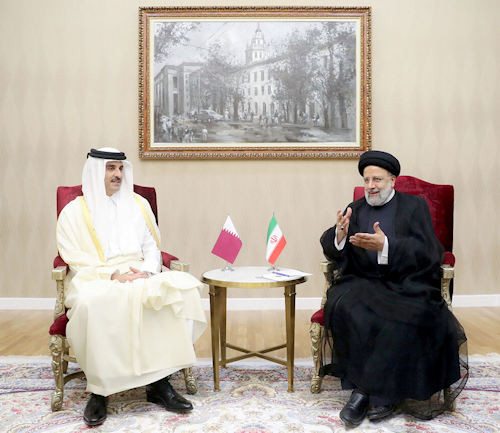 Even Iran, considered the real object of the diplomatic war against Doha, congratulated, noblesse obligation, emphasizing the “ability of the Qatari people to resist external pressures”.

Indeed, Qatar slipped out of the embargo without responding to, and even less renouncing, the accusations launched by the coalition countries: support for "Islamist terrorism" (especially the Muslim Brotherhood, banned by all four countries involved) and ambiguous relations with Iran.

It is a consolidated fact that Qatar supported Islamic radicalism even and well before the explosion of the diplomatic crisis and, apart from Bahrain (de facto occupied since 2011 by Saudi and UAE troops under the guise of fictitious peace force sent by the GCC to support the government of the emir, which also has an almost totally Arab population, but of Shiite rite) Qatar was the country closest to Iran.

The 2020 oil price crash and the gas price explosion following the Russian aggression on Ukraine both weakened the oil-producing Gulf countries and strengthened Qatar (which briefly abandoned OPEC , accusing it of being a tool of Saudi hegemonic policy), which has seen the list of potential buyers grow longer, even less willing than before to raise issues that annoy Doha. We want to avoid at all costs a new strengthening of the axis with Tehran, with heavy political and far-reaching energy consequences.

Similarly to the fear of a new axis with Iran, the Gulf countries do not want to leave Turkey and Erdogan's erratic leadership an opportunity to reappear in the region, putting Doha under too much pressure, mindful that also thanks to military and food aid from Ankara, Qatar resisted their embargo, which in their plans was supposed to bend the rebel emirate.

In essence, Qatar has rejoined the GCC without yielding on any of the points advanced by the coalition countries (and the underlying fears of natural gas customers, who had to bite the bullet) and has further expanded its room for manoeuvre.

Ahead of the World Cup, Qatar has made tremendous efforts to beautify its image in world public opinion and silence long-standing allegations of harboring terrorists and encouraging terrorism and extremism. Due to the Doha World Cup, Qatar has been playing nice with the West as part of its effort to make people think it is contributing to security and stability in the Middle East while harboring and protecting dangerous groups of its own for the safety of the West itself.

In reality, Qatar is not considered a friend either by the West or by its own Arab 'allies'. In fact, Qatar's support for the global jihad remains a source of concern for many who see Doha as an inconvenient but necessary partner: it has used its infinite resources by showering gifts, sponsorships of all kinds, financial contributions to universities and think tanks, investing in influential publishing groups and prestigious companies.

As long as Qatar continues to fund and host the Hamas leadership, and as long as it continues to use Al-Jazeera to encourage jihad and extremism, the only real game the emirate is playing, apart from the World Cup (where its national selection was obviously eliminated after only two games, showing the instrumentality of its bid to host the group), is to a dangerous game.

Photo: FIFA / US Department of State / presidency of the republic of Turkey / IRNA

In the last weeks of 2022, the consolidation of the "stratified" Russian defensive line east of the Dnieper River and...
6516
Read