Home geopolitics Analysis In Beijing, the great helmsmen are at home,... 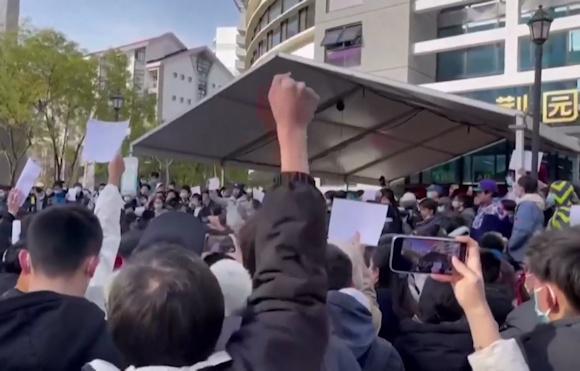 The CPC Congress just held, despite having defied history with the reiteration of Xi's mandate, failed to get the better of the flaming upsurge of a pandemic that has shown no intention of letting go, leaving, thanks to the pouring rain, tangible signs of his viral indomitability even on the centuries-old wood of the crucifix flaunted by a suppliant Pontiff on a dark and gray day.

In Beijing i great helmsmen are at home, miracles are not, and the only and questionable way to go is still the one imposed by the strategy of the so-called zero covid, nevertheless affected by the same fate that disfigured the Roman Christ of the 400s in effigy.

Rising Covid cases expose all earthly limits of Han politics: i lockdown did not produce the desired results, and after a few weeks of opening up the authorities were forced to return to a very rigid but fragile system, which is accompanied by increasingly stinging doubts about both the validity of the daily health and hygiene prophylaxis of a country which as an alternative technological economic political pole to the declining Russian one, both in relation to the pharmacological efficacy of vaccines A nephew e Synopharm produced by national laboratories. It is no coincidence that during the visit of German Chancellor Scholz, Beijing approved the administration of the vaccine BionTech to German expatriates, not excluding its mass diffusion. However, this would acknowledge Chinese scientific incapacity, precisely at the moment of the fiercest technological competition with the USA.

Thinking back to the early stages of the pandemic, considering the duty already paid to an increasingly pervasive globalization, last week's over 31.000 Chinese cases of which 27.000 were asymptomatic, do not bode well for anyone given that it is the worst situation encountered in recent 6 months.

According to the Financial Times the Chinese health system, this time, could collapse, but it is certainly not in keeping with the prestige and credibility of a helmsman, a policy that intends to keep a population of over 1 billion people in forced isolation. While the rest of the world is forcibly coexisting with a mutagenic virus, China, from which the same virus has maliciously projected itself onto millions of unsuspecting victims, dreams of an impossible glass bell that would prevent further deaths capable of placing the Party in serious difficulty.

Foreign vaccines are not well tolerated by the ruling class, and in addition the population is not adequately immunized. According to epidemiologists, if Covid were to really break through, at least 6 million patients could need hospitalization in intensive care, an unsustainable number even for the capabilities of a Red Prince who, in recent years, has turned his attention to the containment of the virus, allocating the funds needed for research elsewhere. Community immunity for the CCP is not acceptable.

The restrictions, however, have a price: the economic and production slowdown, to which has been added the wrath of a people exasperated by the lack of freedom and the obtuse implementation of measures which, already rigid in themselves, have led to paradoxes such as those that led to the death of a 4-month-old girl1 and 10 other people in Urumqi2 in Xinjiang. The protests in Xinjiang, among other things, are characterized by the risks deriving from the repressions already carried out against the Uighurs and other mostly Muslim ethnic minorities.

The episode in Urumqi, still unclear, has raised such controversy that the authorities issued an apology statement followed by a declaration of an emergency term, an announcement greeted with sarcasm and which seems to be able to ignite new protests3.

On social media, the expressions of anger and frustration of a people are multiplying, accused more and more often of disturbance of the social order, cannot comprehend the freedoms of others that are highlighted by the images broadcast from the stadiums of Qatar. However, the discontent is so widespread that the censorship has barely managed to filter the news regarding the protests that broke out in the Taiwanese Foxconn plant4 in Zhengzhou.

It is clear that as long as the philosophy of the will dominate zero covid, with production times far from the paradigms of normality, the multinationals will look with suspicion at the Chinese apparatus already threatened by India, ready to host the Apple plants.

The risk for Xi, who defended his strategy as an expression of the superiority of the Chinese system over Western ones, consists in a generalization of protests similar to those of Zhengzhou, capable of inhibiting the business of investors.

The increase in infections forces Beijing to a crossroads: on the one hand, the continuation of lockdownon the other, loosen your grip to encourage growth; but how can this last possibility be reconciled with the risk that the virus will endanger the sovereignty of the Party? And how to remedy the intolerance, youth depression, the drop in marriages, the decrease in the fertility rate, the drop in GDP growth, which is stuck at 3,9% compared to the 5,5% set for this year?

In Shanghai the protests have directly the leadership of Xi, calling for his resignation. Beijing has therefore increased its controls, albeit in the awareness of being able to further fuel the tension between central power and peripheral branches; therefore, two solutions remain: continue with targeted quarantines hoping for spring, or loosen controls to restore full efficiency to businesses. By presumably choosing the first option, the government, in containing the health emergency, will fuel social unease and an economic slowdown, reducing consensus with the Party, and making it more difficult for the main geopolitical junctions to function, condemning itself to subordination with Washington.

Given the protests in Shanghai, Wuhan where it all began, Chengdu and Beijing at Tsinghua University, it can be said that the contagion has also affected the political sphere: the demonstrators parade with blank sheets of paper with which to hide their identity, or resorting to any artifice may prevent their recognition given the progressive violence shown by both sides. After all, the protests constitute an intolerable challenge for the communist regime which, intimidated by historical memory, still continues to operate so that the events of Tien an Men of 1989 fall definitively into oblivion.

In addition to cracking down on dissent, it is possible that the party rebounds the criticisms received towards the peripheral administrations which, however, could face challenges. In this context, the BBC claims that one of its correspondents has been arrested by the police. Related Chinese economic and political overviews. While the anti-Covid protests rage, from one incredulous The Vatican, seemingly devoid of the diplomatic malice that 2000 years of history should give it, arrive surprise and regret for those not agreed, the appointment and installation of Monsignor Giovanni Peng Weizhao as auxiliary bishop of Jiangxi, a diocese which is not recognized. Against an agreement renewed a few months ago, the investiture of the prelate smacks of a powerful political slap.

Meanwhile, markets are shaking as Asian indices drop, commodities take the hit with oil down 3% and Brent down 2,86%, and investments are slowing down. The MSCI stock index outside Japan fell 2,2% hit by the decline caused by a sell-off in Chinese markets. The chaos over the anti-Covid measures is creating uncertainty on the markets, with the central bank cutting the required reserve ratio by 25 basis points, which would free up $70 billion in liquidity to help support the economy.

R. Subbaraman, Nomura's chief economist for Asia, believes there is a danger that China's plan to live with Covid is too phlegmatic, and that the protests will further weaken the economy; according to G. Wildau, CEO of Teneo Holdings LLC in NY, markets will respond negatively to widespread protests… which could trigger new supply chain disruptions dampening consumer demand. For Jessica Amir (Saxo Capital Markets - Sydney), anything exposed to China will be vulnerable, and the future earnings of exposed Chinese companies will be in question, and investors are likely to express this by selling. Oil plummeted and metals declined weakening demand for energy; gold fell while the dollar strengthened causing the most precious metal to fall.

It is a time of widespread protests: while anti-Covid measures are contested in China, women in Iran take off their veils, incurring the wrath of the Ayatollahs. In both cases it is interesting to verify the popular involvement against measures perceived as freedom killings. After all, authoritarianism, whether exercised by Great Helmsmen or from Reflections of God, it always consists in a deprivation of rights; those who take to the streets hope that the future can be different and better although, both in China and in Iran, the protests cannot be traced back to any single leader capable of pursuing a coherent and constant political line.

In a silent West incapable of understanding the real and most important thrusts, only a crucifix deteriorated by the rain remains.

1 The father said efforts to take the girl to hospital were thwarted by ambulance paramedics who refused to proceed with the transport as they tested positive for the virus.

2 The deaths were caused by delays in relief due to the rules against covid, as well as the possibility that several access routes were blocked in advance precisely to facilitate the lockdown. Popular anger erupted after Party officials blamed the residents themselves for their inability to flee.

3 However, the government has said that taxis, railways, buses and other public services will resume. China Southern Airlines has announced the resumption of flights from Urumqi.

4 Foxconn produces 70% of iPhones globally. The factory had already made headlines due to previous protests, lack of salary adjustments and about 12 suicides

Latin America is seething. This is a dramatic fact that is there for all to see. From Mexico to...
1613
Read

The news is blood curdling for its long-term implications, however you can bet…
2843
Read

While the attention of the whole world is focused on the evolution of the Russo-Ukrainian War, in the lands of the Caucasus there is…
2156
Read

In the last weeks of 2022, the consolidation of the "stratified" Russian defensive line east of the Dnieper River and...
6559
Read

One of the most compelling Disney stories of recent years is the one entitled The world to come; read it, it's worth...
5127
Read

“The Western Balkans must decide which side to take: on the side of democracy, this is the European Union,...
7741
Read