Home geopolitics Analysis New dress, same dance: how much it weighs and ...

New dress, same dance: how much does the new Chilean Constitution actually weigh? 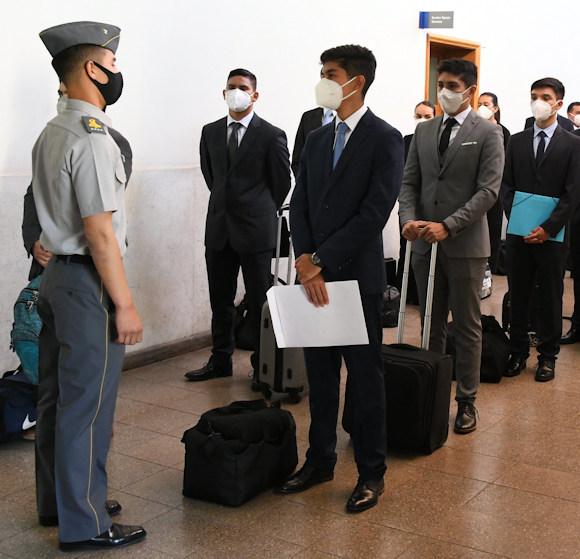 No constitution creates power, at most it interprets it effectively. It improves the performance of the country that has it. It is oil for that power. Chile, starting a constituent process following theoutbreak (outbreak) in 2019 of many, too many social classes, has chosen to redefine itself, because the karst rivers of its contradictions have come to the surface. Depending on how the new constitution succeeds in declining the strengths and critical points in a new plot, Chile will be able to raise the depth of its position in rank, but it will not be able to change it.

Chile, like every country, lives in geography, the cross and delight of geopolitics. And the space of Chile, South America, is a garden, a garden not his own, but of the global hegemon, the United States. The name of the garden can vary according to the project itself or the actors who play with it… Latin America, Indo-America, Ibero-America, but geopolitically this continent belongs to the strategic security space of the North American superpower. Here the dominus they are the last resort, regardless of whatever constitution Chile may be.

Yet an effective constitution can best interpret the way of being stuck in the space of influence of others. Knowing how to act as a satellite can generate ever wider spaces of autonomy. First of all, Chile knows that the garden in which it is located is huge, so not all its regional sectors suffer from US strategic needs in the same way.

Chile is located in the named geostrategic area South cone, it can be defined the South of the South, the area furthest from the breath of the USA. Even more, Chile is an immense strip of land that makes up the far west of this area. It is south of the south, and west of the west (west). Thus it overlooks the Pacific, the ocean where China, the second world power, tries to gamble for its rise, and on Antarctica, of which Chile, calling itself Southern land, it is said ramp of spear and ambitious harpoon. Here are already defined the first geopolitical coordinates of the Chilean match. The immensity of the spaces. Of the actors. Their projects. But now a new giant has emerged, the crisis of a hierarchical society, de facto illiberal. The anger of the excluded and submissive threatens a rift.

Managing them means playing at multiple tables and at different levels. As a country that faces 4200 km of coasts on the Pacific and therefore on the main global geopolitical match, the US-China competition, and being at the same time very rich in raw materials, but for this dependent on their export, Chile is immediately catapulted in the main global challenge. Being exposed to Asia in commercial form is in fact unavoidable for Chile, but precisely for this reason it needs to reaffirm its reliability in the eyes of the United States. Position translated in two directions: without ever fully adhering to any South American cooperative project, which envisages a collaboration in a more or less anti-US sense, both taking the form that former US Secretary of State Condoleeza Rice defined as transitional country, that is a country so reliable in the eyes of the US, that it can be delegated by them the representation of their strategic interests on the spot. In this sense, Chile has set up its relations with China, never going beyond an economic level. It is in fact aware that China, through economic leverage, is looking for a potential door (for example Venezuela or Cuba) to enter the US backyard, but it also knows that it does not currently have the skills or the will to really challenge them in the most domestic part of the world. their defensive depth.

For this reason, for example, Chile was able to afford to acquire the Chinese vaccine, without this really changing the posture of the Chilean alliances. Translated, Chile, aware that it is seen as a door, has only looked out the window, from which it has taken vaccines, knowing that the maximum compensation is economic (with attention, however, that tomorrow it will not be easily translated into a geopolitical key, given the 'Chinese acquisition of strategic raw materials, such as lithium).

The economic level of relations with China shows a criticality of the Chilean system, the pathological dependence, typically South American, on the export of its immense raw materials. This is also why Chile imprints its commercial posture in a more bilateral sense and in an open regionalism, compared to the more stringent multipolar cooperations, of which it knows inadequate regulatory governance, permanent geographic-infrastructural difficulties and excessive export restrictions. The first antidote to the export pathology will be the diversification of markets, so that dependence is not one-way, but maintains more alternatives in the event of "storms", such as that of trade tariffs between the US and China, which are still in progress.

However, it is on the internal level that the main challenges of the new constitution will arise. We will change a text that dates back to 1980, launched by the past military dictatorship of Pinochet. Although filtered by continuous reforms in a democratic sense, that constitution maintains a strongly centralist state structure, in turn supporting an absolute neoliberal economic model. A structure that has crushed the condition of citizen on that of consumer. New declination of the same colonial pact, for which submission passes through debt. In fact, since the founding of the nation, enormous social fringes are in fact bipartite in a hierarchical society with an above and a below. With the poorer classes, as indigenous and now the middle-class, forced to go into debt, in order to participate in an economic system modeled on the preservation of certain privileges. It will therefore be the redefinition of the presence of the state in the economy, within a renewed economic paradigm, which is more progressive, redistributive and inclusive (therefore democratic), guaranteeing essential public social services, to determine the ability of Chilean democracy to reform. In doing so, he will not have to fall into Venezuela's Bolivarian welfare model of absoluteness, nor into Argentina's toxicly protective model. In this sense, the game on raw materials becomes a game on the taxation of the large multinationals, which manage them, and depending on its new intensity, it will be fundamental to understand what the type of state presence and its redistributive policy will be.

The ruling classes currently in power, defeated in the constituent assembly, seem to want to play survival rather in the next presidential election and in the relationship that the new president, elected with old constitutional rules, will have with the new constitution. If not to bury it, at least to "correct" it. They know that the same model of society is at stake. From this point of view, admission to the constituent assembly of indigenous minorities, such as the Mapuche, seems to set Chile towards a nation re-building more inclusive of the country's overall human factor. The more inclusive and participatory it will be, the less hierarchical it will be, the less it will be owned by the current "masters" of the state.

The real goal is a rewrite of the socio-economic model, to strengthen the muscles of a country that, having unchanged its geopolitical dominus, therefore finds itself participating in its recent games. For this reason, reuniting the company will strengthen the geopolitical fiber of the country. The ultimate goal is what has always animated any Chilean ruling class, that is, not to be marginalized as a country in the extreme south-west of the US garden, and at the same time remain an exception to the regional context. Exceptionality that now also passes into placing itself as a paradigm of solid democracy, in an area stereotypically imagined as essentially authoritarian. Being careful not to be too exceptional compared to the region, which would mean being absorbed by the identity of the hegemon. Real risk, because every empire ultimately wants to make people believe in its mission, to the point of identifying with it. Assimilating “provincial” cultures with one's own is functional to the idea of ​​security-related quiet.

Chile knows that Americans expect stability and predictability, or strategic security for themselves, from their Latin provinces. The new constitution also serves to react to this project. The value of stability is the maximum value for the Chileans themselves. Strengthen the identity just as it changes. To remain exceptional, but still yourself.

As was widely expected, during the Summit of NATO Heads of State and Government in Madrid, Finland and Sweden ...
4040
Read

The international situation is evolving rapidly and there is no country that does not have to adapt. In an area of ​​course ...
8371
Read

The visit of the Chinese foreign minister, Wang Yi, who in the second half of May touched several small states ...
1106
Read

The focus of geopolitical attention cannot be fixed; Ukrainian drama aside, Asia continues to stir up more than ...
8897
Read

The vote in the UN Assembly of the motion condemning Russia's aggression against Ukraine has ...
3226
Read

Wars are not only fought on the battlefield but also on agricultural fields. The world is witnessing a ...
1535
Read

The Ukrainian conflict does not stop international relations, which are bound to each other by a globalization ...
2375
Read

The rise of China as a global economic and geopolitical superpower has heightened tensions and concerns about ...
3354
Read