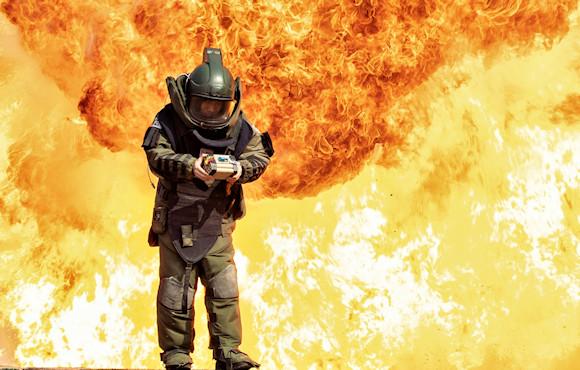 Contrary to what the name suggests, the Rare lands they are not "rare". In the earth's crust these elements are abundant and their rarity comes from being mixed with other minerals and rarely present in concentrations that make extraction profitable.

The chemical properties of the elements of Rare lands make them difficult to separate from surrounding materials and from each other. They are also difficult to purify in fact current production methods require a lot of mineral and generate a large amount of harmful waste such as radioactive water, toxic fluorine and acids. The production of elements of Rare lands has a huge environmental impact: one ton can generate up to 60.000 cubic meters of waste gas, 200 cubic meters of acid-containing wastewater and over a ton of radioactive waste1.

The elements of the Rare lands, considered strategic resources, they are used in the production of consumer goods (liquid crystal displays, light emitting diodes and mobile phones), in industry and in the energy industry.

The development of military technology and new defense applications have in turn increased the demand for rare earth elements for the production of engines for system-equipped fighters, destroyers and cruisers. Aegis, missile defense instruments, satellites, ammunition, communication systems and much more. 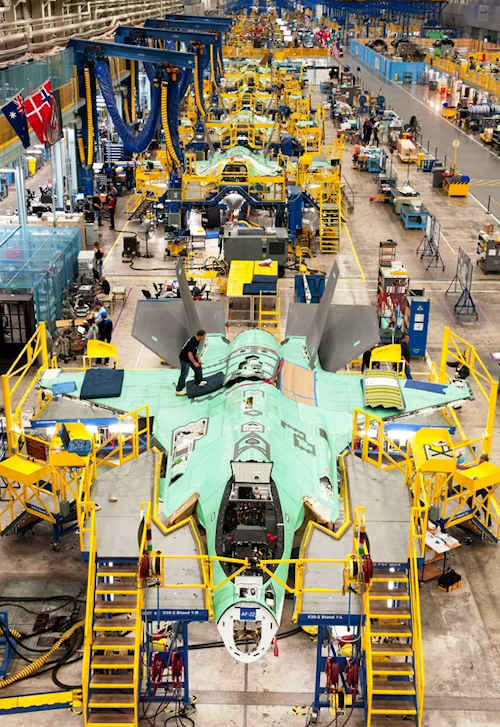 An emblematic example of the great use of Rare lands in the defense industry is represented by the F-35 fighter that requires about 415 Kg of these elements.

Research in the defense sector over the years has led to relevant discoveries such as the one made in the 60s by the US Air Force which developed Samarium-Cobalt magnets that maintain their magnetic properties even at very high temperatures, increasing the power of the instruments. radar.

The Soviet Union of the 80s also managed to increase the performance of the MIG-29s by using Scandium to make the aluminum lighter and stronger.

The United States from the 60s through the late 80s was a major producer of Rare lands until China became a major low-cost producer and exporter of these items.

History teaches us that highly concentrated mining production in one or a few countries is vulnerable to market manipulation and natural disasters, political changes or environmental problems.

It is estimated that the demand for elements of the Rare lands is destined to grow very rapidly as the transition to renewable and clean energies requires this type of elements for the production of, for example, hybrid electric vehicles, generators for turbines used for wind power generation or semiconductors. Each intermediate product uses only some of the 17 elements of the Rare lands. Lanthanum and Cerium, for example, are the two rare earths used in catalysts for petroleum refining.

China aims to dominate the supply chain of Rare lands also by increasing its presence in Africa. Several studies have speculated that, from a military point of view, the dependence of the United States on a potential adversary for critical resources could change the outcome of a military confrontation, for example, into a large-scale and protracted military conflict with Beijing for a dispute in the Taiwan Strait or the South China Sea2.

The study of the elements of Rare lands that China has accomplished in fifty years has led to an expansion of its production and, from the moment these elements were declared strategic resources, Beijing has set no limits to the environmental consequences of mining and has increasingly implemented its reserves and exports causing a collapse in prices that has caused several Western mining companies to shrink or go bankrupt.. This has led Western politicians to worry about their own reserves of Rare lands indispensable for the military industry and for technological innovation in general, thus reactivating previously disused mines. 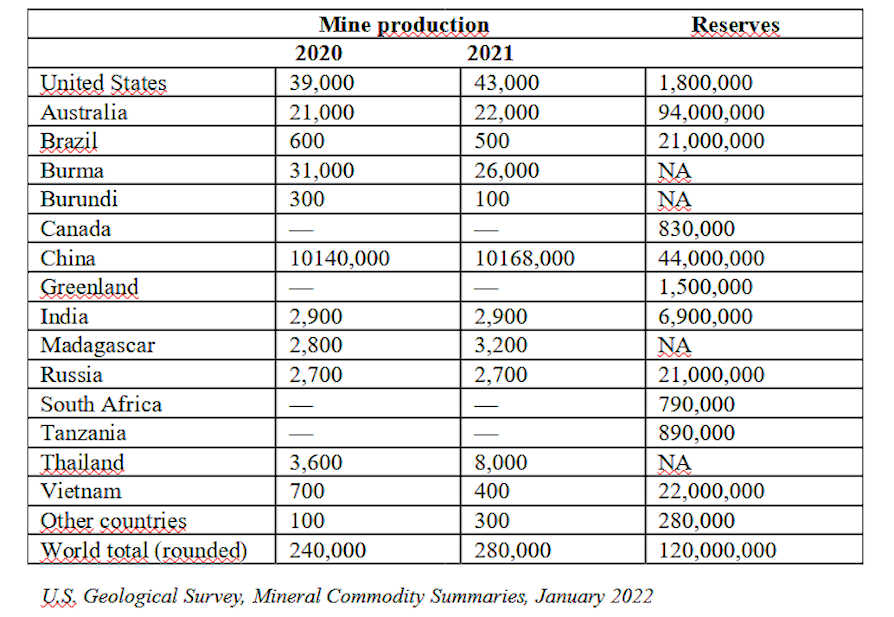 China is the largest producer (but DON'T because China has most of the elements of Rare lands), consumer and world exporter of Rare lands, controlling over 90% of the global supply. It continued to be a leader in the production of Rare lands e it uses it as a geopolitical weapon. 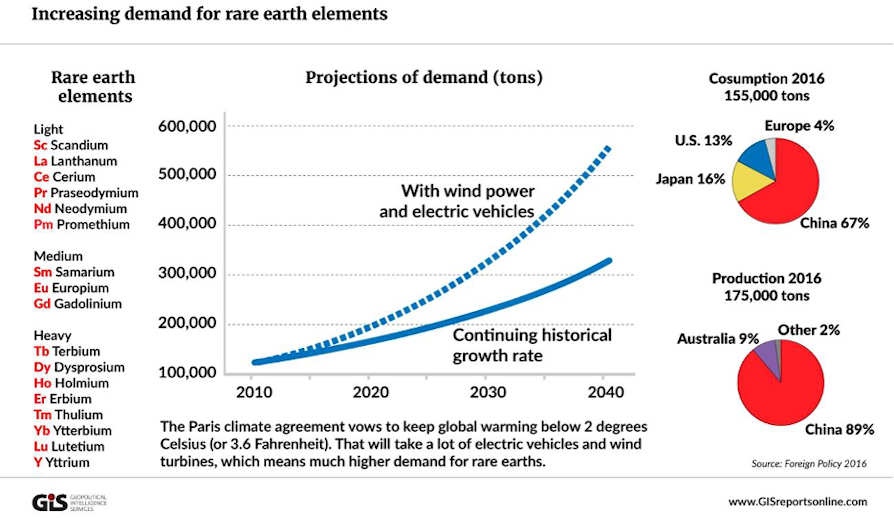 It is interesting to note how the skirmishes between the US and China that affect Taiwan in some way are resurfacing today. We refer to the incident that occurred in May 2020 when, after a visit by President Xi Jinping to a magnet factory, an article by Xinhua warned that “Leading a war commercial against la China, the United States risk di lose the procurement of materials vital per support la their force tecnologica3". A month later, Beijing threatened US defense contractors with sanctions following the approval of a $ 620 million deal to supply missile parts to Taiwan. 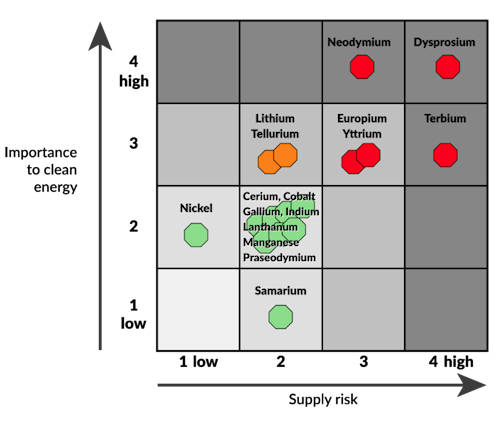 Beijing recently began to consolidate its control over the industry to keep prices high, reduce environmental pollution and ensure Chinese converters have access to low-cost materials.4. Chinese policy appears to want to maintain abundant reserves in order to impact markets by influencing prices such as, for example, lowering global prices and knocking out Western competitors by increasing production quotas or easing the crackdown on illegal mining operations.

Since they failed to predict an exponential increase in domestic consumption of Rare lands, it is unlikely that they will apply a price limitation for long periods as it would divert useful resources from its processing industry. Finally, the exponential increase in production and exports would accelerate the exhaustion of these elements.

The elements of the Rare lands they are strategic resources used in many industrial and technological fields. Control over distribution and supply chains is an aspect that Western nations should always consider as indispensable for the economy.

The West since 2010 has failed to incisively counter the Chinese monopoly also in consideration of the enormous amount of Rare lands marketed by China at low prices, discouraging competitors. New opportunities could open up in the near future as Beijing uses a huge volume of Rare lands and probably will not be able to meet the demand of its internal companies, giving Western producers the possibility of returning to the market.

1 Chen and Zheng, "What Happens"

Between the second half of July and the beginning of August over thirty people died (including two soldiers ...
573
Read

The strategic reflection of the EU has always progressed with difficulty, due to the often different vision of ...
2698
Read

Al Qaeda loses its subtlest mind; like in a Tom Clancy novel, al Zawahiri was eliminated by the 2 missiles ...
4229
Read

In the course of the two previous analyzes we spoke first of the figure of the Prime Minister of Hungary, Viktor ...
8089
Read

India and China are the two major Asian powers and among the most important countries in the world. Their relationships are ...
1791
Read

In the spring of last year, the United States, United Kingdom and NATO announced the withdrawal of troops from the ground ...
2455
Read

It being understood that international relations, by their very nature, cannot experience moments of stasis, there is no ...
6029
Read

In the course of our previous analysis we talked about how the leader of the political party Fidesz, Viktor Mihály ...
3271
Read

Draghi and a large delegation of ministers - half a dozen - are preparing to conclude a large number of agreements ...
3389
Read