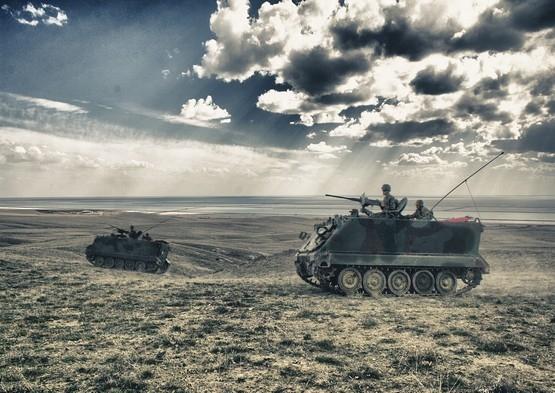 The geostrategic posture of Turkey, in addition to motivations of military political hegemony, responds to the growing ambition of the Sublime Porta to become a reference energy hub for the entire region: a place of forced transit for gas and oil from the Eurasian Heartland.

To this aim, relations with Iran and Russia have been based in the last decade, with the aim of becoming the collector of Iranian oil on the one hand, and of creating the conditions for a gradual disengagement of energy from the Russian Bear from the other.

Always to this national interest we must refer:

- the will to acquire important shares of the so-called "southern corridor" - (fig. below) - that identified by Europe as a strategic project, which should transport the gas coming from the rich offshore deposits of Azerbaijan, in the Caspian Sea, passing for Turkey and the Balkans;

- the close diplomatic relations with Iran, prior to the nuclear agreement, which once implemented will lead to the replacement (energy) of Moscow with Tehran.

Ankara, ultimately, intends to become the sole collector of an important fraction of Asian oil and gas: not only Iranian, but also Turkmen, Azerbaijan and Kurdish-Iraq, playing on the southern quadrant the same role played by Germany on the northern one.

Geopolitical function with a great economic return, in light of the forecasts (by GAZPROM) that give European energy consumption a strong growth, due to the recovery in consumption and the decrease in domestic production.

To carry out this design, Ankara would like to start immediately with the construction of a pipeline that will connect it to Iraqi Kurdistan, to be operational already from the 2019, the year before the expiry of the energy contracts in place with the Russian counterpart.

Even more necessary choice, in consideration of the cancellation of the Turkish Stream project - the gas pipeline that would have allowed to transport Russian gas in Europe through Turkey, bypassing Ukraine -, promptly canceled after the accident of the Russian jet shot down by the Turkish flak.

However, the will of Ankara clashes with the interests of Moscow to which it is significantly linked - it is the second GAZPROM customer after Germany (55% of the gas is supplied by Russia) - and from which it would release quickly if it had access to reserves of Iraqi Kurdistan, with its 5 trillions of m3 of gas, already established.

The Turkish aims are also strongly opposed by the PKK (and the political formations connected to it), which last February 17 blew up a sector of the pipeline that transports the Iraqi and Kurdish crude to Turkey causing the daily loss of 6000 barrels (and l 'break for 23 days), and has also sabotaged a sector of the pipeline that carries up to 6mld of m3 of gas from Azerbaijan to Turkey (13 break days).

It is no coincidence, therefore, that the Syrian Kurdish Democratic Party (PYD), a political offshoot of the PKK, has opened a representative office in Moscow, to further demonstrate Putin's thought - always valid in relations between states - according to which my enemy's enemy is my friend.

The PKK has also targeted the Trans Anatolyan Natural Gas Pipeline (TANAP) - currently under construction - which will transport via Caspian Sea, passing through Turkey, up to 36 billions of m3 per year of gas, 21 of which for countries Europeans.

The latter - a project worth 10 billion dollars - involves Turkey, Georgia, Azeirbajian, as well as representing an outlet for Turkmen gas (up to 16 mln of m3), and is aimed at allowing the transport of Azeri gas in Europe; once finished, you can connect to the Trans Adriatic Pipeline (TAP) with which you arrive in our Salento.

Despite these attacks, the energetic designs of the Sublime Porte are proceeding quickly, due to the enormous associated economic and geostrategic dividends.

And with the support of the European Union: just a few weeks ago, the EU commissioner for energy and climate, Miguel Arias Canete, met his Turkish counterpart, Berat Albayrat, stating in a joint statement thatparties underlined the importance of Turkey as a key country for regional energy security, and agreed on a common commitment to successfully implement the southern corridor by 2020 (which will bring 10 billions of m3 from the Caspian region, the Middle East and the eastern Mediterranean) ".

Venezuela would be experiencing a dramatic new "revolutionary" phase, as a potential alliance between the FARC ...
434
Read

Many people wonder what the big countries and big organizations have concluded in Berlin ...
788
Read

The Berlin conference, called to settle the Libyan question, presented itself with a program, unbalanced to ...
15189
Read

On what happened on the night of January 3 as for the record there is little to add. What matters is the ...
1512
Read

The foreign policy of any country is, or should be influenced by history, culture and psychological aspects ...
3935
Read

A few hours ago the council of dignitaries and wise men of the Turcophone enclave of Misurata rejected the visit of the ...
6259
Read

The Sahel occupies an immense strip of territory, a transition area between desert, savannah, equatorial forests and ...
2232
Read

When the Egyptian rackets will stick to the Turkish (tennis) balls, Ankara and Cairo (as well as Washington and ...
8801
Read

The Palazzo della Civiltà Italiana was soaring towards the sky celebrating heroes, poets, saints and navigators, but without ...
2112
Read