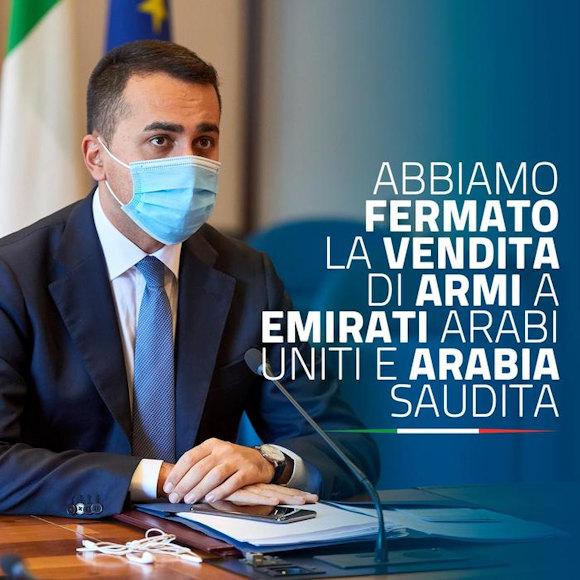 The Italian political scene in recent days stands out in several respects; first of all for the seething of an institutional crisis with indefinable contours, and for the jolts caused by the shocks that come from the wider complex of foreign policy and the inevitable connections that it interweaves with the indissoluble financial and commercial constraints.

Remaining in the context of the enlarged Mediterranean, a phrase for many similar to that given by Alessandro Baricco to define jazz ("if you don't know what it is, it's jazz”), The Persian Gulf continues to be animated by the latent conflict between Saudi Arabia and Yemeni Houthis. While Isis returns to strike in Baghdad, Riyadh continues to be the subject of air raids presumably conducted by drones, vehicles already widely used in the attack on Abha International Airport in August 2020, and against the Saudi Aramco plants in September 2019. In relation to the latest events, it is worth noting both the note condemning the Houthis issued by Doha, a clear sign of reconciliation after the total embargo to which Qatar has been subjected in recent years, and the Iraqi claim by the al-Wa Brigade 'ada al-Haq1, unknown group.

A first consideration on a broader spectrum concerns the hypothesis that the Biden administration took office in any case induced many countries in the Middle East region to take more politically polite in front of the US, while other local forces try to undermine the overall picture. In the emergence of the dynamics resulting from the rise of the new Potus, the direct communication between the Secretary of State Anthony Blinken and the Minister of Maio begins, probably motivated by a crisis that inhibits institutional contacts with a resigning president but which nevertheless certifies a role pre-eminent attributed to the Farnesina by the US government, and recognizes the importance of the other technical department par excellence, Defense, whose minister, Guerini, seems to have positively impressed Lloyd Austin, the new head of the Pentagon, especially on the occasion of his last visit to Afghanistan , and who spared no compliments and further phone calls to his Italian counterpart.

What transpires seems to be the need to put an end to the ambiguities of the last Italian executives in terms of foreign policy, starting with China to reach Putin's Russia, with a clear caveat destined to significantly affect the principle of non-interference; therefore the curtain opens on a stage in which the political space, for Italy, is all to be conquered, where nothing can be taken for granted, and in which relations with other partners, especially if of more recent date and in coveted hegemonic position (China) will be carefully examined.

Already in the last few weeks, several signals had highlighted that the stops to war supplies from the American side, in the light of the recent Abrahamic Agreements, while they would not have affected relations with Abu Dhabi (however now very doubtful), could have constituted a warning of change of course towards Riyadh, although Blinken was keen to specify that "It is typical at the start of a new administration to review any pending arms sales"; however, the perplexities remain, given the low consideration enjoyed by the Saudis within the Biden administration, which also does not exclude the desecretation of the report concerning the Khashoggi murder.

Returning to the Defense area, the attention paid to industrial cooperation with "la growing synergy in the industrial sector ... and industrial collaboration, through which the main Italian excellences can express their competitiveness on the US market ... ". In this regard, the mission in which Nave is engaged should be remembered Cavour, directed to the USA for certification and boarding of the F-35 in short take-off and vertical landing versions.

With these various perspectives in mind, let us return to foreign, financial and war export policy.

Is stopping arms exports useful? In principle, actions of this type lead to little, especially if military exports are led to submit to ideological aspects and conformisms, especially if they are related to the fact that there is no effective legal instrument to support the industry in its exports, while, in addition, the issuance of even more stringent constraints aimed at ascertaining the requisites required by law is looming, which would lead to exclude from a more than profitable market and a harbinger of developments regarding research and development, also Allied countries.

In consideration of international and financial relations there are no empty boxes but positions to be filled, this leads to a first conclusion, namely that the cases of the UAE and Saudi Arabia, as far as we are concerned, highlight the need to deal in a broad sense with an issue that heavily affects both industrial and relational aspects in terms of foreign policy, especially if and when conditioned by disputes concerning both the internal politics of the country (see the recent sale of the UUNN Fremm to Egypt), and the actual technical / political / administrative competence of the ruling class.

The suspension measure taken by Italy, however, a few hours after the return of a Matteo Renzi2 in the version as a lecturer from Saudi Arabia, it concerns 6 licenses, one of which issued by the Renzi government (MAE 45560) and related to almost 20.000 aerial bombs, for a value of over 400 million euros. It must be said that already with the Conte 1 government, in July 2019, a resolution passed by Parliament was adopted, which suspended the export licenses of bombs and missiles to Saudi Arabia and the UAE for 18 months, except to extend the stop in December 20203 expanding the limitations, suspending new licenses and revoking those in force which, therefore, can no longer be reactivated. In any case, the new American presidency, decidedly more opposed to arms exports to Saudi Arabia than in the past, also by virtue of the possible relaxation of relations with Iran, sponsor of the Houthis, is pushing countries such as Italy to proceed with the blocking of exports.

Saving As usual only and exclusively to courtyard politics, the race to win the title of supporter started. In a general uncharted exultation among the members of the current majority, there remains the well-founded feeling that, on the issue, Italy remains immobile in an ideological approach not responding to national interests and extremely penalizing for the country's few productive and competitive assets.

The international situation is evolving rapidly and there is no country that does not have to adapt. In an area of ​​course ...
7082
Read

The visit of the Chinese foreign minister, Wang Yi, who in the second half of May touched several small states ...
1053
Read

The focus of geopolitical attention cannot be fixed; Ukrainian drama aside, Asia continues to stir up more than ...
8762
Read

Wars are not only fought on the battlefield but also on agricultural fields. The world is witnessing a ...
1471
Read

The rise of China as a global economic and geopolitical superpower has heightened tensions and concerns about ...
3275
Read

Last May 23, with a grand ceremony attended by President Recep Tayyip Erdoğan as guest of honor ...
4507
Read