Putin's cuff on the polo shirt 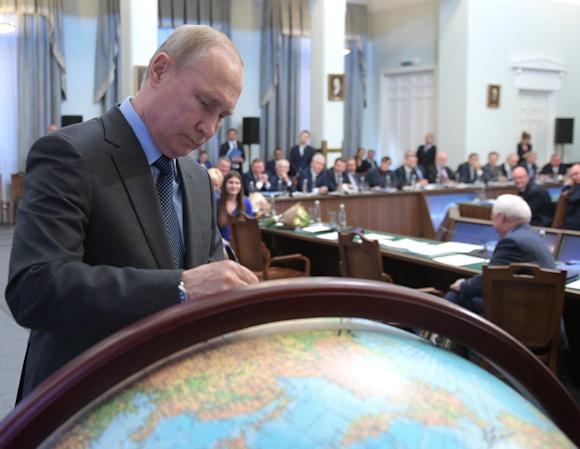 The Arctic Ocean is warming up, but the reason is only partly due to the so-called "greenhouse effect". Until recently, the Arctic remained one of the few areas of the globe characterized by a relatively scarce human settlement and therefore with reduced possibilities of international conflict.

Even during the "Cold War" the region was mostly ignored by the two large opposing blocks. The main theater of the battle was Europe, whose offshoots extended also to the Mediterranean and the Middle East, but the Arctic as a whole was visited only by strategic bombers and ballistic missile submarines that were supposed to use the frozen ocean as an area maneuver in case of nuclear conflict.

The importance of the Arctic gradually increased after the end of the "Cold War" for two reasons.

Primo: the new multipolar geopolitical order that has been created, has seen the affirmation of two new, or at least potentially autonomous, geopolitical actors, namely China and the European Union, and the consequent eastward shift of the center of gravity of the global economy. This development is increasing the importance of Russia as an economic and political link between the EU and China and, consequently, even the Arctic itself is seeing its importance grow as a trade route.

Second: the fact that the Arctic area is rich in natural resources, especially energy, whose exploitation would be such as to greatly impact the future trend of the global economy by further raising the rank of the power of the countries that will manage to grab all or part of the resources that lie below the Arctic Ocean. 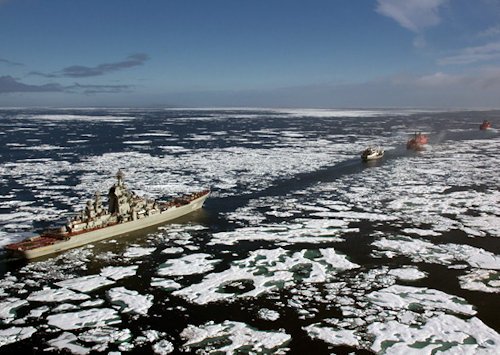 By accepting the inevitable caveat that, beyond international law, "possession represents the 9 / 10 of the law", any power that wants to access and maintain a stable presence in the Arctic must also equip itself with a considerable icebreaker force to guarantee sailing in water temporarily or permanently covered by frost. Already today, the world's major powers maintain ice-breaking fleets whose size and importance will continue to increase over the next few years and decades.

Being the country that has the longest stretch of coast on the North Pole side and having maritime and commercial interests in the region that date back centuries, it is not surprising that the Russian Federation is the country that maintains the largest and most modern icebreaker fleet. world, with other remarkably detached powers. It is also the only country to operate nuclear icebreakers, ships whose propulsion guarantees considerable resistance and which can crush the ice also by using powerful jets of hot water, courtesy of their own reactors.

Currently, Russia's nuclear icebreaker fleet consists of 4 active ships and 1 in reserve. Active ships include the "Yamal" and the "50 Let Pobedy" each driven by two reactors capable of generating 75.000 hp, and the "Taymyr" and "Vaygach", each equipped with a single 50.000 hp reactor. A fifth nuclear icebreaker, the "Sovetskiy Soyuz" is kept in reserve, while the "Sevmorput" is also available, a nuclear-powered container ship equipped with bow and ice breaker keel and capable of operating independently on the pack.

The nuclear icebreaker fleet is then completed by five conventional "Project 21900" icebreakers each powered by an 30.000 hp diesel engine.

As for the plans for future expansion, the current fleet will be reinforced by the new nuclear-powered icebreaker LK-60Ya "Project 22220", also powered by two reactors but with slightly more power than their predecessors (80.000 hp) . 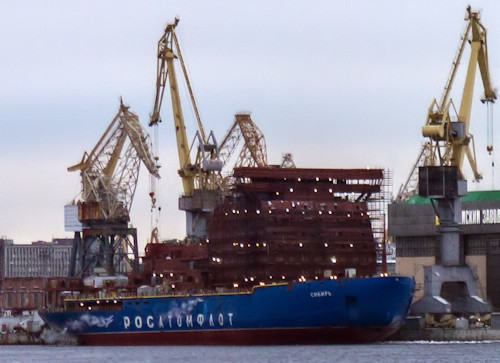 The first two ships of the class, "Arktika" and "Sibir" (photo), have already been launched while the third, "Ural" is still under construction. In total, the Russian navy will deploy 5 units of this class, all within the next decade.

The icebreakers of the LK-60Ya "Project 22220" class will be followed by the LK-110Ya Lider "Project 10510" which according to the designers should boast not only an enormously greater power (160.000 hp) but also a greater width, to allow even the largest ships to use the "North Passage". Overall, the expansion plan approved by the Russian Federation's high-level decision-makers provides for the launch, by the 2030 of no less than 13 icebreakers of which 9 will be nuclear-powered. This will represent both quantitative and qualitative expansion and is a clear indicator of the importance of the Arctic in Russia's strategy.

However, the icebreaker's fleet expansion plans represent only the classic "tip of the iceberg" of the Russian strategy of winning the race for the domination of the North Pole. Recently, the Russian Air Force High Command announced that, by the end of the 2019, two squadrons equipped with the powerful Mig-31 interceptors will become operational which, starting from the bases located in the Murmansk area, will be permanently assigned to patrol the areas of the Arctic Ocean claimed by Russia as an integral part of their territory.

It is important to note that, with almost 300 specimens in service at the air force and naval air forces, the Mig-31 is one of the most powerful interceptor aircraft in the world and is equipped with electronic equipment and a panoply of anti-aircraft missiles from first choice. Not only that, thanks to the development and upgrading programs carried out over the last few years on the new versions of the aircraft, today the Mig-31 is also able to carry out anti-radiation and anti-ship missions, the latter using the deadly missile Kh-47M2 Kinzhal, armable with both conventional and nuclear warheads. 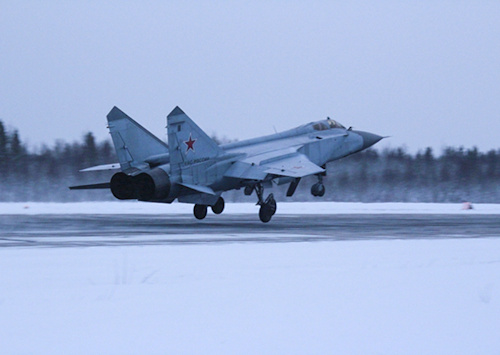 Even the troops assigned to anti-air defense, those for coastal defense and the simple ground forces are the recipients of priority programs for the purchase of new equipment specifically designed for use in the Arctic areas. In particular, anti-air defense forces are receiving a new version of the 9K330 anti-aircraft system Tor, the M2DT, also called "Snow Tor" and a new version (the SA) of its smaller "cousin", the Pantsir, specially designed to operate in the prohibitive climatic conditions of the far north of Russia.

In the course of successive exercises in the last 4 years, the Russian armed forces have also temporarily redeployed in the area also the anti-aircraft systems S-400 and the dual-use systems (anti-ship and land) K-300P Bastion-P.

Another element to take into consideration, beyond the arsenals mentioned above, is the logistical and infrastructural effort. For some time the central authorities had begun to rebuild and modernize the extensive network of bases once created by the Soviet Union in the Arctic area in support of a possible military effort in the event of a new world conflict, but lately it has gone further . In the last 6 years, Russia has in fact inaugurated in the Arctic area no less than 475 new military installations of all types, from the smallest to the largest. The difference with the Soviet period, however, is given by the fact that, while the Soviet Arctic bases were essentially "points of support" and in many cases they only presented the indispensable structures from "popular" only in the case of exercises or armed conflict, the new structures recently created or under construction are in effect permanent bases with high operational readiness. One of these is a large brand new base recently inaugurated on Kotelny Island (located geographically much closer to Alaska than in Moscow itself!) Which is equipped with accommodations and accommodations to permanently host at least 250 men equipped with supplies and energy supplies to operate a full year without the need for any external support. Three such bases are already fully operational, and others will follow in the coming years.

It therefore appears obvious that Russia is committed to a long-term effort to gain a strong position in the Arctic that its adversaries cannot tarnish except at the cost of the outbreak of a large-scale crisis with unpredictable results.

When the Kremlin leadership will judge that the balance of power in the Arctic area will be definitively modified to its advantage, then it will be able to officially make the move to unilaterally annex 1,2 million square kilometers of arctic surface facing the northern Russian coasts and, in this way , will get not only the control of energy resources and other nature located there, but will also ensure the undisputed domination of the trade routes of the "Great North" to and from Europe and China.

Given the panorama we will examine, as Mickey Mouse in Fantasy we will be accompanied by a soundtrack for help ...
807
Read

According to the rules of the house of geopolitical realism we start from the facts, from the geographical areas, to arrive at ...
1681
Read

After the rapid victories of the Tripoline forces against Haftar's troops in Tripolitania the attention of opinion ...
4064
Read

We followed, like many others, the latest US events and their vast echo in the world, and we preferred ...
1914
Read

Covid is not just a health emergency; the thin red line that unites the events is still emerging and ...
994
Read

The recent unrest in Hong Kong (as we write about 300 arrested protesters including several minors) are the ...
1957
Read

Stereotypes brand people and things, even nations. Brazil leads to Carnival, to football, to a set of ...
2390
Read

The great emphasis that the Turkish media gave to the release of Silvia (Aisha) Romano and the small train ...
1628
Read

According to Fedor Tjutchev1 “Russia cannot be understood with the mind, nor can it be measured with the common yardstick: Russia is made ...
2662
Read