Home Recommended Insights The military parachute: Like Folgore from the c ... 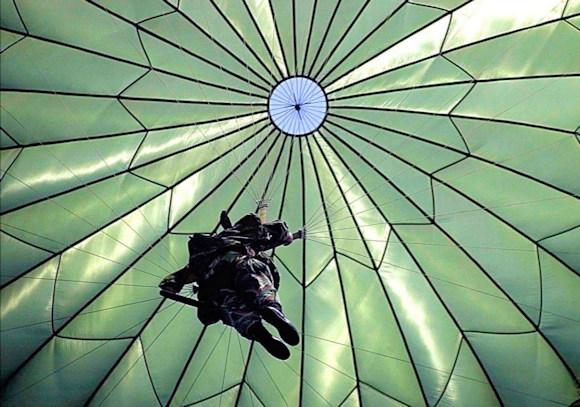 There is little to say, the paratrooper license is coveted by every soldier and in every armed force. In fact, it is not absolutely rare to see them shine even on the uniforms of the Army or the Navy. But while you pause to admire a launch from a C-130, you never reflect enough on the piece of canvas and the history that allowed Leonardo da Vinci to see one of his projects realized: "everyone can throw themselves from any height no risk "?

A few weeks ago the US military carried out tests on reserve parachutes to eliminate the risk of premature openings. Intrigued by the unique experimentation, we took the opportunity to ask the Army press office to investigate the subject by interviewing two reference professionals.

In a very short time ("Folgore times") we were put in contact with Colonel Cristiano Maria Dechigi, the deputy commander of the paratroopers brigade, and the sergeant major Umberto Arcella, non-commissioned officer "Folder" of the AVIO battalion - Aviolanci and Maintenance company.

Colonel Dechigi has a 40-year career behind him and with undisguised admiration he is described to me as the "historical memory" of Italian military parachuting. Let's ask him the first questions ... 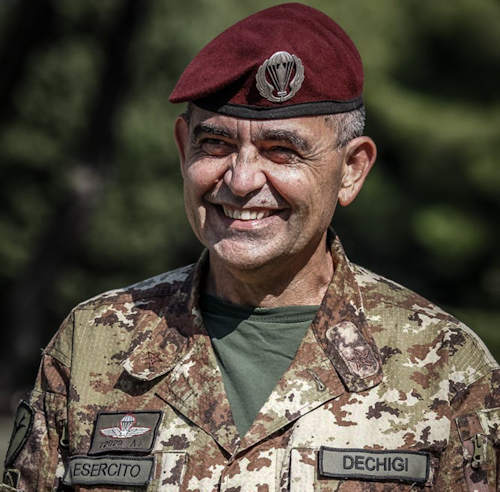 Colonel, what is a parachute?

Technically, the parachute is a device that has the purpose of reducing the descent speed of a body to which it is bound. For us soldiers this translates into a device to be used as a means of transport in order to reach the area from where our mission will then begin.

How is a parachute made?

A parachute consists of a canopy from which a group of suspension ropes depart. The latter go to connect to a harness that will therefore support our paratrooper.

Going a little more specifically, we could divide our parachute into three main sub-assemblies, namely the canopy with the suspension ropes group, the harness and finally the safety device for opening the reserve parachute.

When was the parachute introduced in the military field in Italy?

The first used for military purposes and not just to save life, as it was in any case, is an English parachute still preserved in Udine at the Julia Alpine Brigade Museum. It was used in 1918 by a nucleus of Arditi infiltrated into Italian territory occupied by the Austrians.

Until then, the parachute was the rescue tool for artillery observers raised on balloons to check enemy lines in search of targets.

During the twenties and thirties it was the Regia Aeronautica that conducted launch experiments with even more men. The technological limits of the time, beyond the quality of the aviation materials, also resided in the load and transport capacity of the aircraft. 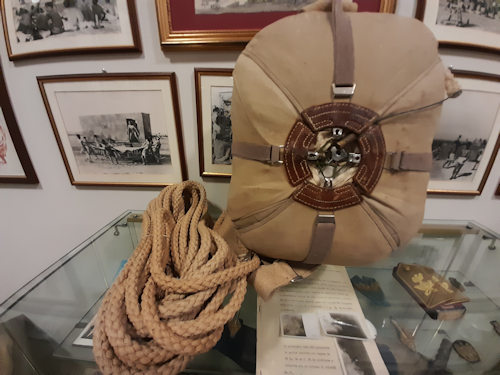 Surely, therefore, the parachute entered service in the Royal Army and subsequently in the Royal Air Force as safety material for all those who in some way began the conquest of the sky and the third dimension at the beginning of the twentieth century.

How many models have followed up to our days? What differences and characteristics?

The first military unit set up for entry into combat by parachute was the Libyan battalion "Fanti dell'Aria" made up of soldiers from the Royal Colonial Corps in Libya. The experiment wanted by the governor general of Libya ended with the outbreak of the Second World War and the allocation of all resources to the school of Tarquinia, the true cradle of Italian military parachuting.

The department employed parachutes of the Salvador model / series (Photo), that is, rescue parachutes and not tools created to employ armed units. The same materials will equip the newborn paratroopers of the Royal Army until 1941.

Precisely in 1941 a parachute similar to the German one of the time was produced in Italy, designed for military air raids and not as a life-saving tool. Called IFSP41 (click here) will remain in service until the end of the 40s, replaced well after the war by a transitional model called 4 BI which left the scene at the CMP53 in the early XNUMXs (in the following photo on the left) and then to the CMP55 (in the following photo on the right), parachute designed and manufactured in Italy based on the design of the Military Parachuting Center. 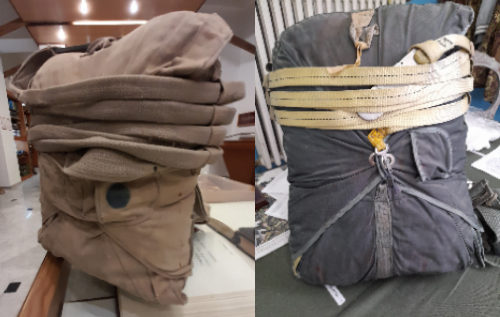 The CMP 55 also in the slit variant and in the Lisi variable descent model, reaches up to the mid 80s when it will be replaced by the Irvin 80 parachute and later by the T10 still in use.

All the models indicated are flanked, from 4BI onwards, by the emergency parachutes introduced by the Americans during the Second World War. In the course of these material transitions, construction techniques developed and from the silk, rope and hemp of the first models, we arrived at the nylon fabric of the controlled porosity caps and the use of synthetic material for the realization of the suspension cords like harness ribbons.

Even the color of the glazes, initially white, has become mimetic and today is normally olive green.

In the large air-launch operations conducted by the Germans during the day at the beginning of the war, there were colored parachutes according to a color code to launch supplies of weapons, ammunition, food, medical equipment.

Night launch operations have begun, the need for colored caps has disappeared. 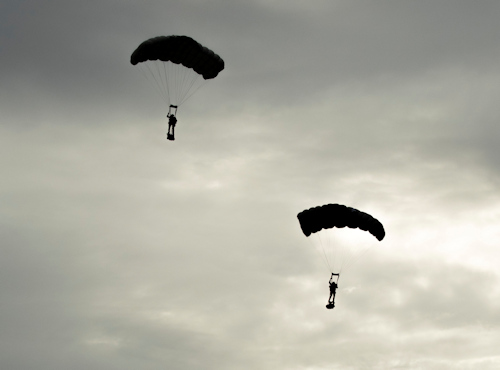 When were the first directional parachutes introduced?

“Directional” parachutes for military purposes have “technologically” grown in characteristics and capabilities from the XNUMXs onwards. They began to equip units that operated in small groups and with the need to land in confined spaces or following a heavy load to be employed.

Since the eighties these materials have been revolutionized in the design that from a hemispherical cap with several segments and openings, which allowed relative maneuverability, have been transformed into wing profiles composed of "caissons" capable of transforming the incoming air due to the vertical descent in linear thrust with the result of allowing true "navigation" with an open parachute for decidedly considerable distances.

Is the parachute a statistically "safe" tool?

Much more than we are led to believe. The incidence of accidents due to material malfunction is very low.

More often than not it is the man who, if anything, does not follow the procedures in dealing with the launch, which remains a test for many, but not for all, made up of self-control, physical preparation and alertness.

What and how many throwing techniques are there?

The throwing techniques can basically be divided into 2 different macro-areas:

Do Allied armies use identical or similar equipment to ours?

Allied armies use equipment very similar to ours. It is clear that there are many companies on the international parachuting market, therefore, the choices of the parachute "system" can fall on different companies and different types that each State can decide independently; however, the "Preliminary Operational Requirements" remain the same for all.

Are "military" paragliders or have they ever been used / evaluated in our country?

It is difficult to imagine the "military" validity of an object that has been designed to stay in the air for as long as possible from a launch point that is not an aircraft. Due to its characteristic, the military launch takes place either at the minimum possible altitude, in order to reduce to a minimum the time of exposure to the offense of the man who hanging from the parachute cannot defend himself and is the condition of the mass launch. On the contrary, the launch and opening of the parachute at very high altitudes allows you to navigate and infiltrate enemy territory while keeping the aircraft it is carrying hidden or in a safe area. Experiments have been conducted with hang gliders / powered parachutes but they have not gotten much following from us. 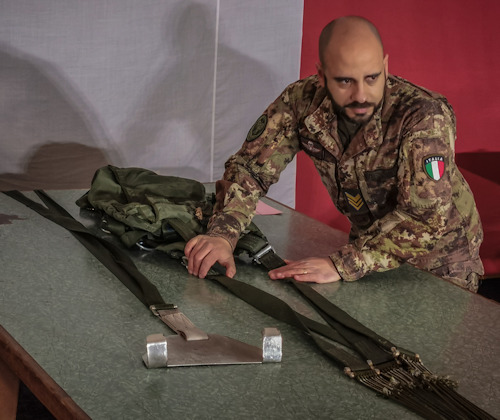 Thanks to Colonel Dechigi for the exhaustiveness of the answers, we listen to the serg. major Umberto Arcella (photo), non-commissioned officer "Folder", whose teachings and experience - and maybe some cazziatone ... - must be considered "sacred and blessed" by every student.

What are the unexpected events that can occur during a launch in relation to the main and secondary?

Is the correct folding of a parachute ever underestimated - as happens in other fields - by those who feel too experienced?

The folding of a parachute is part of those operations that a skydiver carries out with the utmost professionalism and attention that distinguish him. 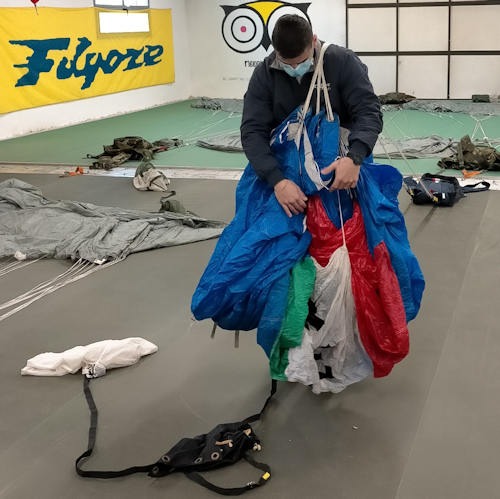 It may happen that the expert parachutist prepares to fold the parachute with greater speed and ease, yes, but the operation is never, in any case, underestimated.

A particular memory in your career that you still carry with you?

Seventeen years ago I had my first "contact" with military parachuting, and until then I had only seen a few parachutes in the civilian field of sport parachuting.

It happened to me, in the military field, to witness for the first time the operations of "folding" of a parachute by the "Folders". As a newly assigned to the air troops I was amazed by the meticulousness with which all the procedures were carried out.

At the end of the folding I asked, in my heart only for confirmation, if the one I just folded was a reserve parachute, or the "last chance".

Right there I was frozen by a dry and decisive answer: they explained to me that for the Folders the difference between main parachute and reserve parachute is only in the technical procedures of folding, but the attention and meticulousness with which the same is carried out is maximum always. 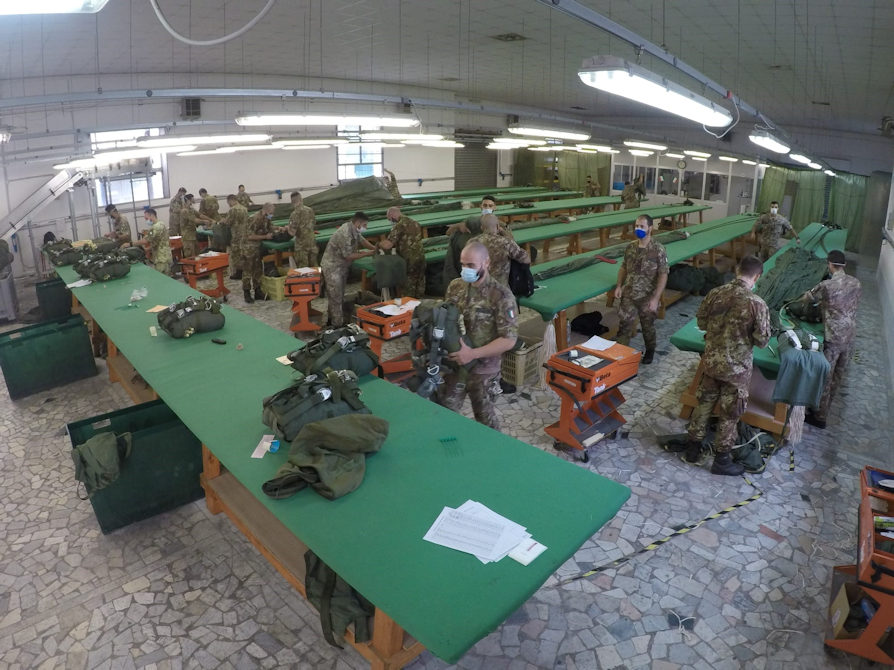 It often happens that in order to understand the origins of a conflict, as to understand where an evil comes from, one must investigate ...
5164
Read

Valery Vasilyevich Gerasimov was born in Kazan, in what was the Soviet Socialist Republic until 1990 ...
24386
Read

The dramatic images of these hours from Afghanistan summarize, in the most tragic way, not only the ...
2679
Read