The Libyan soldiers train them (also)! 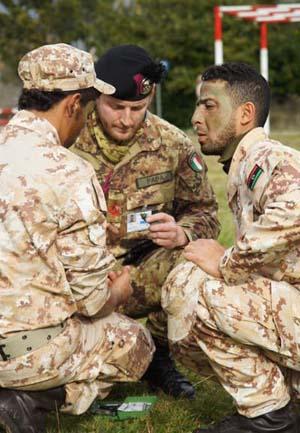 "The activity stems from a specific request by the government of Tripoli advanced to Italy, Great Britain, the United States and Turkey, as part of the" G8 Compact "initiative for the reconstruction of the new Libyan Armed Forces and security. phase began last November in Tripoli with the selection and amalgamation of around 500 soldiers by a team of military experts of the Italian Army who worked in full synergy with the Libyan authorities appointed to select personnel.

With the training activity they will carry out in Italy, the Libyan military will perfect their training on the infantry platoon level.

The program, entirely financed by the Government of Tripoli, is part of the bilateral cooperation between Italy and Libya in the defense sector (Army, Navy and Aeronautics) and in the field of police training by the carabinieri, thanks to an agreement signed in Rome on 28 May 2012 and which provides, as a whole, the formation in Italy of several groups, spread over time, for a maximum of 2000 units coming from the three Libyan regions: Tripolitania, Cirenaica and Fezzan ". (SMD )

(Do not miss the last 7 minutes)

Enjoy it in HD!