Home Tales of military life The story of a spoiler at the Salone Int ...

Ilaria has big eyes that light up whenever she remembers the first time she wore a camouflage. Effective at the 32 ° regiment sappers of Fossano (Cuneo), with assignment "operator of special vehicles", he inherited from his grandfather, platoon commander in Libya during the second world war, decorated with bronze medal for Military Valor, love for the Armed Force.

She still attended the Technical Institute for Tour Operator in her beloved Naples when the long-awaited opportunity arrived: the Army also opened its doors to the recruitment of women. Opportunity that Ilaria seized on the fly, finding herself, in the 2007, to board a train with destination Ascoli Piceno, for a period of three months at the 235 ° RAV (Volunteer Training Regiment) "Piceno".

These are months of great commitment, at the end of which comes the first assignment: 10 ° Supply and Maintenance Center (CERIMANT) of Naples. Precisely in his city he was employed in the "Strade Pulite" operation with the task of "core reclamation conductor". An operation that sees a real "Task Force" of around 160 soldiers and a hundred special vehicles of the Armed Forces operate in the territory with the aim of freeing the city from the approximately 37.000 tons of waste. A task carried out with great commitment: "I was in front of a building whose façade was partially covered by a heap of rubbish that reached almost to the first floor. Suddenly I realize that a lady of about 70 years was calling me from her apartment window. I look at her and she thanks me for our work, but the phrase that particularly struck me was - you gave Naples a smile. A phrase that still excites me today ". 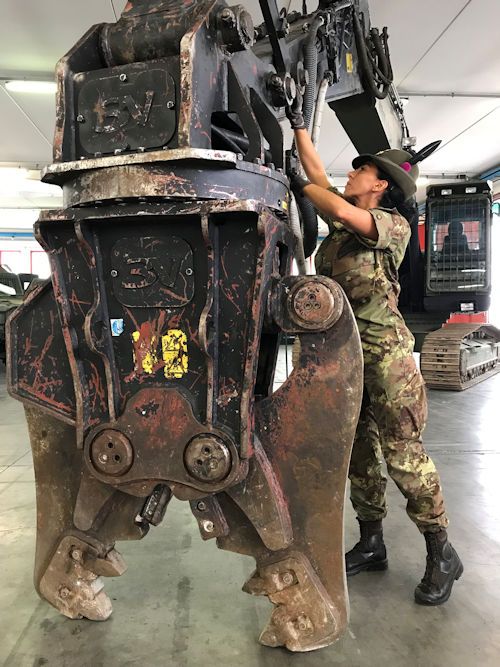 Closed the Neapolitan parenthesis, the 1 ° caporal major De felice wins the competition as VFP-4 and starts a new chapter as a spoiler at the 11 ° genius regiment of Foggia. The task comes as the "special vehicles operator" of the genius, at the controls of the "Komatsu" crawler excavator, a new target centered.

In the 2013 he participates in the "snow emergency" in Puglia coordinating from the operations room the movements and the use of the various teams located on the ground during the night. But the experience that affects it more than others is certainly the one linked to the seismic emergency in central Italy.

Year 2017, the genius regiment plays a fundamental role in relief operations for the population hit by the earthquake in the operation called "Sabina 2". Ilaria finds herself operating in Monte Sant'Angelo, a particularly stricken hamlet of Amatrice, in the preparation of the plots where the first housing modules would have been positioned to guarantee a "roof" for the people left without a home. De Felice works in a carpenters team with the specialists of the 6 ° genius regiment of Rome: "One day, during the short lunch break under the tent set up by the colleagues of the Civil Protection where most of the displaced people were also welcomed, a very distinguished gentleman of about 90 years devotes a smile to me that reminds me very much of what my grandfather dedicated to me. I change my smile and while I do it, I instinctively ask him for a recommendation - please, eat ... He replies by reassuring me that his son was going to bring him the tray with lunch. Then his gaze turns off while struggling to maintain a vein of serene resignation ... - Unfortunately my wife can no longer do it, she remained under there ... .. and in doing so she points to a pile of rubble that probably must have once been their nest".

Ilaria's eyes hardly hold back tears remembering those moments that will remain engraved in her heart for a long time, a testimony of how important the work dedicated to those people was.

The "spoiler" Ilaria also brought these experiences to the international emergency exhibition that took place in Montichiari last weekend, an event that was a great success also in terms of influx. An event that saw multiple arrangements of the Alpine Troops to attend with personnel and special vehicles, testifying to the ability to intervene in the event of public disasters in the national territory.

These are the departments: members of the 32 ° sappers, of the "Taurinense" Logistic regiment and of the "Tridentina" Command Department. On the occasion of the Sunday practice simulation, an Army Aviation member also participated with an AB 205 helicopter which contributed to the practical demonstration of the rescue of personnel involved in the collapse of an overpass.

The baked chicken, as expected, had lived up to its reputation, solidifying, if any ...
3259
Read

On 23 April 1996 the 1st sergeant course of the Navy passed through the gates of the Non-commissioned Officers Schools of Taranto and ...
5049
Read

It was freezing cold and it was raining too, on that cold early February morning. I was alone inside the ...
1294
Read

We had just returned from the summer camp that took place in the Ligurian mountains. Get a tan, full of the health of ...
4101
Read

And we went to Podenzana for dinner on a damp February evening. The occasion was the retirement of Acciaroli, Sandro ...
950
Read

Your article on the June 1999 events in Kosovo made me think back to those twenty-year days ...
2361
Read

Since the establishment of NATO all the marinas that are part of it use to exchange official for the purpose of ...
8263
Read

"The Last Missile 2: Chronicles of an Asymmetrical War"