Home News armed forces Spazio Space: the chief of staff of the Aer ...

Space: the Air Force Chief of Staff greets Colonel Parmitano before the start of the "Beyond" Mission 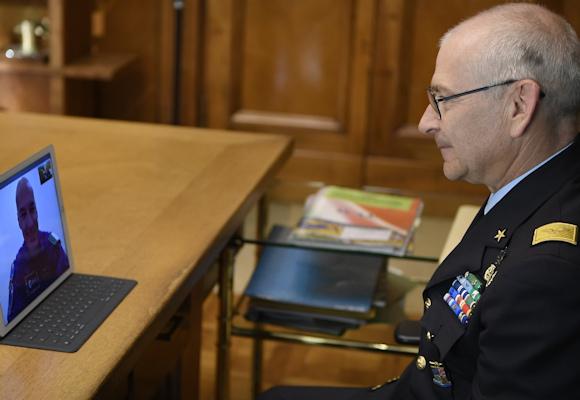 In the late afternoon of today 10 July, the Chief of Staff of the Italian Air Force, Air Squad General Alberto Rosso, congratulated Colonel Luca Parmitano, ESA astronaut (European Space Agency), before the start of the mission " Beyond "on the International Space Station.

General Rosso congratulated the Italian astronaut, who is now in quarantine at the star city of Baikonur, for the post of commander of the Space Station that he will hold during the mission.

Colonel Parmitano thanked the Chief of Staff for the support and closeness that the entire Air Force is showing him, emphasizing that "the years and the experience acquired first in the academy, then in the Operational and Experimental Departments were fundamental in my human and professional growth. My instructors trained me as a pilot and as an officer, my commanders offered me the opportunity to grow - first of all as a man. I hope to be able to apply the same important notions when I am in command of the International Space Station ".

"The war flag of the Italian Air Force is kept in my office" General Rosso underlined in conclusion"the tricolor that not only remembers our country but the traditions, the history and the sacrifices of all the women and men of the Air Force, is a further element of closeness with you that brings the Italian flag on the suit, you will remember it when you are in orbit. All the Air Force is close to you ".