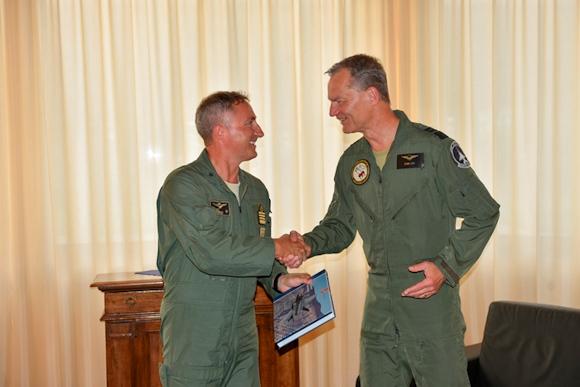 On Wednesday 21 August, Gen. Dennis Luyt, Chief of Staff of the Royal Netherland Air Force (RNLAF), arrived at the "Pagliano e Gori" airport of Aviano to meet his staff involved in the Dutch exercise carried out with helicopters of the RNLAF.

The gen Luyt, accompanied by a delegation formed, among others, by the bg Robert Adang, Defense Helicopter Commander, and by the bg Ruud Schoonderwoerd, military attaché, was received on arrival by the commander of the Airport, Colonel Vincenzo Tozzi.

During the meeting, the Dutch Air Force Chief of Staff wanted to thank Italy and the Italian Air Force for the excellent support provided to RNLAF personnel and vehicles engaged in the exercise, highlighting not only the excellent relations between the Italy and the Netherlands but also the great opportunity represented by the High Blaze, or sharing operational procedures to grow together in the spirit of the Atlantic Alliance.

At the end of the meeting, after the signing of the Register of Honor and the delivery of the Department Crest, the gen Luyt wanted to donate to the col Tozzi a book entitled "Airpower illustrated" published by RNLAF.

Gen Luyt then continued his visit by meeting the deputy commander of the 31st Fighter Wing, with Mark Schmidt.

The 298 ° and the 300 ° Group of the Defense Helicopter Command of the RNLAF, deployed from the 14 August to the 12 September with personnel and vehicles on the Aviano airport, are carrying out an operational training activity foreseen by bilateral collaboration agreements between Italy and the Netherlands, stipulated on the subject of Defense.

The 2019 Dutch military and 230 helicopters participate in the exercise called "High Blaze 5" between CH47 "Chinook" and AS532 Cougar, which carry out training activities, day and night, in western Friuli preparatory to flying in the mountains, otherwise impossible to perform in the Netherlands for their orographic conformation.

The Dutch exercise is allowing the various components of Aviano airport to train themselves to provide services in the field of air traffic, weather and communications to foreign flight departments.

On Tuesday 28 January a delegation from the Royal Air Force (RAF) visited the 61st Wing, the international school of ...
855
Read

The Aviano Control Tower was selected among the 137 other Control Towers managed by the USAF in the world ...
1090
Read 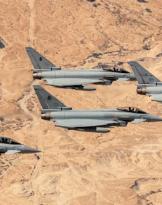