The Anatolian Eagle in Turkey completed 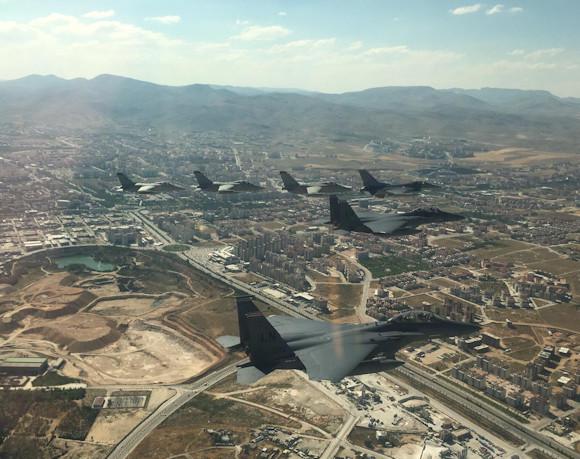 On Friday 28 June the exercise "Anatolian Eagle 2019" (AE19) ended. The annual exercise for the Turkish Air Force takes place at the Konya air base, is one of the most complex in the international arena and constitutes an important opportunity for the development and consolidation of tactics and training of the participating Armed Forces, put to the test in various articulated and dynamic operational, flight and intelligence scenarios. This is not a competition between the different "actors", but a moment of growth and constructive confrontation between the committed units.

The exercise involves the participation of NATO and non-NATO countries: for the Air Force the AM-X of the 132 ° Flight Group of the 51 ° Stormo Istrana took part, confirming that the AE19 is part of the important training appointments for the Armed Forces, as an opportunity to improve the integration between their own staff, navigator and support, and the flight crews of different nations in the conduct of complex air missions that characterize the current scenarios of intervention of the air power.

The AMX of the 51 ° Stormo have carried out numerous missions, operating with maximum efficiency in multiple scenarios with air force aircraft of NATO, the USAF, the Air Forces of Turkey, Jordan, Pakistan and Qatar.

Like other multinational exercises, the AE19 represented an ideal scenario for the Armed Forces and for the men and women of the 51 ° Storm to put common operational experiences together and to confront different weapon systems in a high context. training standards, not only referring to flight operations, but also to maintenance and logistics: essential sectors for the success of each mission.

To confirm the professionalism and the excellent success of the exercise by the staff of the 51 ° Stormo, the awards for the lt col. Joe Goldsworthy, best Mission Commander, and for the airman chief Antonio Amoriello as "distinguished personnel"; individual acknowledgments that cannot be separated from a valid team work of all the participants of the Wing of AEXNX.

The handover between the general of ...
64
Read

The change of command of the Experimental and Shooting Standardization Department took place on Thursday 9 July 2020 ...
1808
Read

On 24 June it was held at Guidonia Airport, in limited form for the provisions on the containment of the ...
475
Read