Home Recommended Letters to the Director Authorizations for using the ... suspended 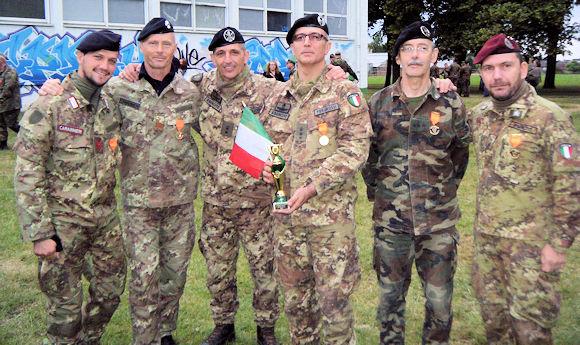 Recently a circular has arrived in Assoarma (M_D SSMD REG2017 0033080 06-03-2017) which suspends for the current year (more: forever) authorizations for the use of the uniform by military personnel on leave not in service or mission, who wants to go abroad for significant military events. The legislation of the Ministry of Defense to which it refers is the publication SMD-G-010, in section VI, which regulates the provisions on retired military personnel and the regulation on uniforms (1). Article. 32 specifies the scope:

In that case: "The Association must send, with adequate advance, directly to the Command / Military Body responsible for the event, the list of the participating personnel indicating the degree. In the particular case of events abroad, if the retired military is invited to participate in it, the inviting Authority has expressed its approval of the participation in uniform, the Defense General Staff will be interested in the "Italian military authorization" in the country foreign interested. ”That is the military embassy officers.

As you can see, the regulatory framework is clear. Here's what the new circular says at the 3 and 4 points:

3 - "The changed geo-political framework that has affected the international community suggests evaluating the limitation of the use of uniforms outside the national territory for retired soldiers not in service activities. In fact, in recent years the Military Attachés have called attention to the need to stick to the prohibitions of wearing uniforms outside the service activity that the international authorities also impose on their military."

4 - For the aforementioned, pending the complete revision of the Publication to which reference refers, the application of the article 32 of the SMD-G-010 Publication, relative to the use of the Uniform abroad for soldiers on leave not in activity of service, is suspended for the current year. (2)

These limitations were therefore solicited by military officials for security reasons in the context of the new situation dictated by terrorism, even if elements of potential confusion had been present for some time. No terrorist has so far masked himself as a retired military man or trained at the UNUCI, while it is true that individual military personnel have now become targets instead of deterrents, hence the limitations imposed in some European armies. But it is also true that outside militarily controlled areas the presence of personnel in uniform of uncertain identity can cause confusion or misunderstanding. In reality, participation in military-type demonstrations takes place exclusively in controlled military areas, within defined spaces and with fixed timetables, and those who violate the rules are sanctioned by the military police. But the problem arises precisely from the status of Italian soldiers on leave: there are associations of ex-combatants and arms associations recognized by the Ministry of Defense, but the Reserve does not exist, therefore legally the soldiers on Italian leave are members of associations of private law, which welcome into their ranks also sympathizers who never did military service. Hence the ambiguities, now solved by the EMS in a drastic way. Unfortunately, for the weapon associations it is not always easy to check the formal aspect and the discipline of their members, and I say this because I have been in it for years. And it is foreseeable that the limitations now applied for abroad will soon be extended to the national territory, especially since the UNUCI is no longer an auxiliary body of the State but an association of private law like the other associations of Weapon.

In the subsequent meeting of Assoarma, the National Association of Infantrymen made on the one hand notice that any misunderstandings arise exclusively outside the militarily controlled spaces within which the military demonstrations in question are held, and that suspending the use of the uniform for events abroad it means totally foreclosing the participation of the weapon associations and reservists in international military sports competitions, where the regulations expressly prescribe the use of the combat uniform and the relative equipment. We therefore proposed the use of the so-called social uniform (civil dress, weapon headgear and association badge) for general events, allowing the use of camouflage and related equipment as long as they do not have stars (which identify the FF.AA . Italian), nor department or specialty grades or badges, and with a military green manali with a clearly visible symbol of the association to which it belongs. Perhaps humiliating solution for someone, but the only one negotiable.

(2) For the sake of clarity we provide the text of the circular in full:

1. Numerous requests for authorizations from weapon associations, formally recognized by the Ministry of Defense, and from military personnel on non-service leave, aimed at obtaining authorization to use the uniform, pertain to this General Staff. outside the national territory.

2. The authority able to evaluate the opportunity to authorize the use of the uniform abroad was identified, in its time, in the military representatives on site who are part of the II Department of the Defense General Staff, by virtue of the perception of security, of the favorable condition detected in the territory of competence and the approval of the foreign State that hosts foreign personnel in uniform.

3. The changed geo-political framework that has affected the international community suggests evaluating the limitation of the use of uniforms outside the national territory for retired soldiers not in service activities. In fact, in recent years the Military Attachés have called attention to the need to stick to the prohibitions of wearing uniforms outside the service activity that the international authorities also impose on their military.

4. With regard to the above, pending the complete revision of the Publication to which reference refers, the application of the article 32 of the SMD-G-010 Publication, concerning the use of the Uniform abroad for soldiers on non-service leave, it is suspended for the current year.

THE HEAD OF DEPARTMENT

I have been reading you with curiosity for some time. You deal with matters of which I believe few can really understand something at ...
4226
Read

Dear Director, I have enormous respect for Senator Liliana Segre. However, listening to the echo of his recent speech ...
1662
Read