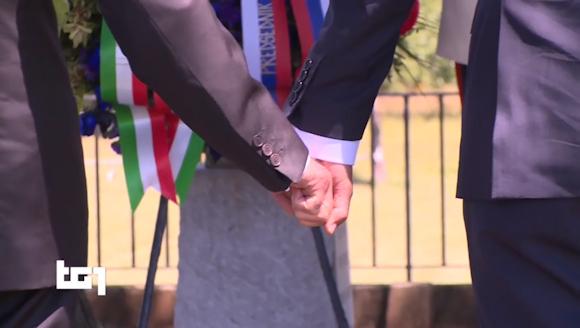 Immediately after the report on Basibazza's foiba broadcast by the RAI news on 15 July, as soon as the images of President Mattarella faded in the act of giving the highest honor of the Quirinale to Boris Pahor, the Slovenian writer (Italian citizen, editor's note) denial of the sinkholes, I exploded in a liberating "thank goodness!". So I continued to myself: thank goodness that years ago I returned to the Italian government the honors of commander and knight "in protest for the lack of courage and pride conduct followed by the Italian government in the affair that involved the riflemen of Marina Girone and Latorre ". In fact, I thought it would not have been decent for an Italian Army officer to whom fate has reserved the privilege of being the first Sardinian commander of the Sassari Brigade to have something in common with a gentleman awarded by the President of the Republic despite the shamelessness shown by the person concerned in claiming that the thousands of Italians infused by his compatriots are a falsehood.

Painful contrasted exhumations allowed to reconstruct the repetition of horrendous sequences of 30-40 Italians tied together with wire and marched to the mouth of a foiba, to then kill the leaders who precipitated dragging themselves into the fall men, women and children destined for unimaginable agonies. A massacre-genocide horribly quantified in 500 cubic meters of corpsed bodies. But the RAI news, presenting the service as a message of pacification wanted by Italy to forget the mutual past violence with Yugoslavia, has instead continued in an unspeakable attempt to "balance the accounts", focusing on the fire in Trieste in 1920 of the Slovenian "Narodni dom" by Italians, obviously omitting to mention the previous killings of the captain and the engine of the ship Puglia in Split as well as the seventeen year old Giovanni Nini and the captain of the army Luigi Casciana in Trieste. By labeling dating events as "fascist", mind you, to 1920, the news in question then focused on the death sentence issued in 1930 by an Italian court against 4 Slovenian TIGR terrorists responsible for various attacks which, among other things cost the life of the journalist Guido Neri of the "People of Trieste".

The Basovizza ceremony also served to sanction the "restitution" of the Narodni-dom to Slovenia, restored and stolen from the University of Trieste. Three hundred thousand Istrian and Dalmatian refugees await the return of their homes.

It should be noted that the RAI service was however illuminated by an unusual edifying "hand-in-hand" of the two presidents, an image which, due to an involuntary association of ideas, has resurrected from my memory that of Pope Bergoglio in the act of kissing the feet of some Islamic notables met on a trip to the African continent. As an Italian, as a soldier and as a Christian I disassociate myself from these behaviors which, in addition to humiliating Italy and Christianity, contribute to fueling little consideration if not even contempt for Italy by peoples with greater national pride and of the same recipients of these demonstrations of submission. Feeling light years away from these behaviors and the protagonists, I console myself with the conviction of having on my side the soldiers who gave their lives to "make Italy" ... but I'm sure they thought not of this but of a ' other Italy.

The language of blood gives me the certainty that Giovanni Loddo, my maternal grandfather, and his brother Francesco, who died in the "Sassari" a century ago in Monte Zebio and on the Piave, think like me. I imagine their imprecations in the language of Ortueri in seeing a servile and genuflected Italy for undignified political choices sprouted in the buggy vital ganglia of the three powers of the state, humiliated by the uncontrolled invasion of a multitude of individuals, in large numbers affected and in number growing covid19 patients and other infirmities, who coming to Italy know they can do what they want and pretend to be maintained and cared for despite the dramatic economic situation. A situation favored and strongly desired by a political class that with the same commitment continues to fight, as pointed out by the RAI news, against ... fascism, yes, against fascism, of which the slanderous sins of racial laws have rightly been remembered and of the tragic entry into the war, two unforgivable spots drawn obsessively by the hypocrites for the sole purpose of pretending to forget the long list of "egregious things" made by fascism.

Some acronyms, toponyms or simple nouns related to "egregious things" can arouse the curiosity of the youngest and stimulate the memory of the forgetful and hypocritical: IRI, first-rate aeronautical-naval-automotive industry, fight without neighborhood to the mafia (words that will blow ears to characters in good faith), ENPAS (formerly ENFPS), TFR (yes, severance pay!), ONMI (National Maternity and Childhood Opera, Italian welfare institution founded in 1925 to protect and protect mothers and children in difficulty, ed), reversibility of retirement, social security, spas, marine and mountain colonies free of charge, enhancement of agriculture and crafts, public construction for justice, schools and hospitals (some of which survived the bombings of the allies - booksellers but not to the "economies" decided by politicians still in the saddle), and then again interventions on roads, urban planning, remediation of vast malarial areas and connected foundation of new cities such as Latina, Aprilia, Sabaudia, Pomezia, Mussolinia-Arborea, Carbonia and Ladispoli ... the very long list definitely pummels with the well-known statement by President Mattarella "There was nothing good in fascism".

Having said that, I wonder how long I will have to be ashamed of being represented by a political class that excels in Europe only for its indecorous privileges and for the lavish prebends of which it is gratified with full hands. Prebends expertly extended to a vast network of top figures who in exchange guarantee, by contraband it for loyalty, a secluded silence even when conscience and role would require us to distance ourselves from censurable behavior.

Mr. President, my name is Andrea Gaspardo, I am a geopolitical analyst based in Italy and, together with the editorial staff ...
3857
Read

Dear Director, we have read the article entitled "We sell ships to Egypt ... but our Navy is sinking ...
4717
Read

On Sunday 11 October a friend left us, com.te Aldo Locatelli. In just over a month he would have completed his ...
1489
Read

Dear Director, I have enormous respect for Senator Liliana Segre. However, listening to the echo of his recent speech ...
1571
Read

The glories of the centenary of the end of the Great War are over, speeches and ceremonies are no longer the order of ...
996
Read

An indisputable assumption is that the publication of news is subject to more or less evident manipulations; it's a fact ...
2872
Read

In recent weeks, due to a sudden flare-up of tensions on the borders between the Republic of Armenia and ...
1059
Read

Dear Director, I know that I will go off topic with this letter of mine, but basically they compared this emergency to a ...
359
Read

Good morning Italy ... First of all I ask you to excuse this situation ... Like many of you I appreciate well-being ...
3169
Read

I am sending you my letter on the wave of emotion, after reading the "letter of a soldier" on the wedding in Lebanon. I'm...
2263
Read