Home Recommended Letters to the Director Letter to Online Defense: Who is it that must have ... 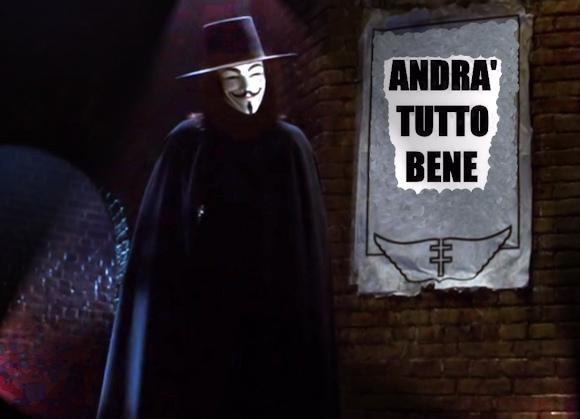 Good morning Italy… First of all I ask you to excuse this situation ... Like many of you I appreciate the well-being of the daily routine, the safety of what is familiar, the tranquility of repetition ... I enjoy it as much as anyone else .. but we must take some time to daily life to sit and have a chat1.

I guess you read the latest news like me. I grant you, it was not an easy time. But what is coming will not be less, you know it too. The virus was a trigger. Lombardy was allowed to be stabbed treacherously while thousands died; the social pact was allowed to break between the wounded regions and the others, which now reject the Lombards. When everything ends do you think Lombardy will welcome you with open arms? Let's be honest: anyone would do the same.

While the North was banned, no one said anything about the mobsters sent home; you will not have forgotten it, I hope, while celebrating Falcone and Borsellino.

Beautiful planes that have spread the tricolor but, you see, it is smoke, it dissolves, hunger, poverty, fear remain. How many put everything they had into their business? Many; but the system has failed: little money, and not even a few crumbs have arrived. In return, taxes and checks and fines remained. Doubt: but if there were so many men (and women) in uniform with their finger ready on the trigger of the fines, where are they now? Where are barbecue drones and helicopters? Can we still have confidence in a uniform that uses the truncheon for a mask without difficulty, while the Nigerian on duty takes the cars in transit with bricks? Can we trust a judicial system that makes political use of whatsapp?

It is not racism: I am noticing with you; I note that this has become a country that, while basking in imbecility, dies and does not even notice it. And even the uniforms that are already there are not enough: we are insatiable, we want more, we want other harnesses that, with a whistle and paddle, force us to realize that, unfortunately for us, the bottom of the barrel has not yet been reached: we want 60.000 informers to awaken our sleeping masochist. Muslims gather to pray to a God who, like ours has generously spread death, but for the few remaining Christians the Churches have not been so easy; and, tell me, what did you think when on a huge deserted beach a citizen was chased for hundreds of meters, while in some cities the gatherings for April 25 saw no uniforms and fines? Didn't anyone think about it? Bad.

Maybe we like scooters and bicycles even if to work we have to travel at least 100 km a day; pity not to have thought of the RSA, where the elderly died in clusters, or the oncology wards where terminally ill patients with little assistance had to look lucidly in the face for an atrocious end because the hospital was in full covid emergency.

Dumbfounded by the worst idiocies that TV puts us in a circle, we are blessed with farcical speeches to the Nation, we have witnessed a pathological narcissism, we listened to avant-show virologists who spoke of banal influence, and economists who made us lay sheets and sing the National Anthem, for the first time not for a football game.

We drank the lie of the masks at 50 cents, and we didn't realize that on those provided by the Tuscany Region it is written that they are not protection systems. We have not even realized why the murderous ignorance of our leaders prevented the autopsies. Inebriated by the TV antics, we were accompanied in the enclosure of the pack animals of the Animal Farm and we did not notice that Big Brother, the real one, had arrived, with his cameras and his controls.

But I still see you smiling: of course, football starts again; pity they did not publicize the accounts of the cremations against families than the famous conjunct they have nothing more than an urn full of ashes. Too bad they didn't tell us anything in December; pity to have kept us in the dark of alarms that would have ruined the images that enhance the tuft of a premier who has nothing under the clutch bag. After all, the number of deaths is only equal to the population of Pescara, or Avellino, or Busto Arsizio. Who cares.

What can all this matter in the face of the tears of a minister who has opened the doors to wild immigration and who will be entitled to any service while we are controlled and spied on by 60.000 new sheriffs?

Even the statues of the Madonnas cry: are we scandalized by this? I do not think. When will the unconsciousness end?

Some will want to take away the word, I suspect that orders are screaming on the phone right now ... Because while the truncheon can replace dialogue ... words will never lose their power ... because they are the means to reach meaning. .. and the truth is that there is something terribly rotten in this country ... where once there was the freedom to object, to think, to speak in the way deemed most appropriate, now you have censors and systems of surveillance that force you to agree ... How did this happen? Whose fault is it? Surely there are some more responsible than others who will have to answer for all this ... but once again, to tell the truth ... if you are looking for the culprit ... you just have to look in the mirror2.

We could have known everything: we preferred to ignore cowardly. Because the 5-star MP who unites the assassin terrorist of Nassirya with his victims likes it; and there is also good that an officer, when he has to operate as he was taught, does not find anything better than screaming "Fuck on board!" to a completely uncontrolled person, with crew and passengers still on the ship; we do not care that the culpable lightness of the Region has produced in Lazio a tender for the purchase of masks spoiled by a defect that has already lost millions of euros, yours.

It is only our fault. It is our fault to have given confidence to movements and parties that conclude nothing, which, in order to maintain the armchair, live on contradictions. From "PD shit, mobsters!" to the Ministries the step was short, let's say it, so short that it is not possible to take a position on anything. I begin to think that the Chinese dictatorship, the one that violently slams patients in ambulances, would do us good, as it would do us good to go through the Xinjiang concentration camps and the Hong Kong batons; perhaps the 3 Fs of the Bourbons of Naples would do us well: a little celebration, a little flour, a lot of gallows, which may be coming. So there is a ensures, what has gone by Vaffaday al "Let's keep the government despite everything", which exulting in the Chinese conquests, exalts those who exported a killer virus.

Meanwhile, while the Venezuelan regime is cleverly supported, in general silence we applaud the arrival of Qatar, its Koranic schools in Italy, forgetting that it is a country that pampers the radicals of the Muslim Brotherhood; without forgetting the vile non-interference with China, when instead we managed to enter into conflict with France over the intrusions of an unconscious foreign minister with yellow vests.

We have already opened the doors to enemies, I don't know if you realize it. After all, what to expect from those who sanctify a regime that hangs homosexuals and stones women? The Renewal Movement has not guessed one and, worse still, in the umpteenth delusion of incompetence reflected in its elected officials, it must support a party that, although hating it, serves it.

The truth is that in the enclosure where we are now, we love to roll in the mud of ignorant unconsciousness. So if you have not seen anything, if what the government has done remains unknown to you, I advise you to leave it alone... but if you see what I see, if you think like I think, and if you are looking like I am.. I ask you to look at what's going on. Both in the North and in the South the fear of revolts inflamed by hunger is palpable; some supermarkets have already been attacked.

Where is the fear at home now? Will the 60.000 civic controllers be enough? If the sale of your country continues, how do you think it will end, with empty cases and without the latest model mobile phone? And, mind you, I see only what the various ministers report, who openly fear tensions, the spread of crime, the end of patience, the triumph of fear.

How do you think it will be possible to contain a revolt of furious, intimidated, hungry people who, thanks to the ignorance of improvised politicians, have lost everything? Spain, suburban France, Romania, Greece (which this year refuses you!) Are already experiencing panic. Think about it. Maybe before it's too late, before consent takes the place of common sense.

1 V speech in London; V for Vendetta, A. Moore.

2 V speech in London; V for Vendetta, A. Moore

Immediately after the report on Basibazza's foiba broadcast by the RAI news on 15 July, as soon as the images faded ...
3782
Read

Since the beginning of 2020 the Italians have become accustomed to the images proposed by the TG of men in camouflage engaged ...
5090
Read

In these days Italy is facing a serious crisis, which puts a strain on leadership and population under ...
3709
Read