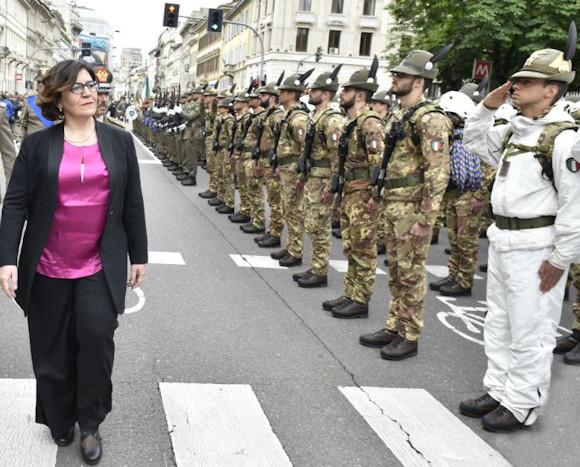 Inclusion that important word, so important to erect it as the theme with which the Ministry of Defense will accompany the 2 June 2019 parade, but including who? About what? It is not known, but they will certainly make us a nice press conference.

An original theme for a military parade, a tool once used for international political purposes and aimed at showing the capacity for war and the determination of a State, but perhaps this is not today's objective of the extraction of forces and who knows what conceptual convolutions there it will have to be invented to bring together the bombings on Belgrade with the dead at sea in the Mediterranean, rather than the Second World War with the earthquake in Abruzzo, not to mention the eleven Isonzo Battles with disabilities.

It is clear that the ones listed above are all things that have nothing to do with each other, but what we want to emphasize is precisely this, the now common tendency, when you have nothing to say in your area, to clumsily invading those of others.

It is clear that to speak of inclusion the Ministry of Defense has nothing to tell in terms of defense and security, if it intends to give Italian citizens a message on inclusion, they must have completely changed their parameters of communicative approach and the target group of reference, also throwing themselves into a risky topic, because when it comes to inclusion it is necessary to enter the sphere of the excluded; the excluded are colors which cannot, through their own forces, make their voices heard, are the individuals placed on the margins, they are those of whom one is ashamed or disgusted, sometimes afraid, often hate.

Do you want an example of excluded? Two disabled children, two little brothers, one female and one male, are always together, to see them from afar you would never say that they have problems, but then approaching their world you realize that they are sailing on another planet, parents fight day and night because they do not remain excluded, but the social system is built to exclude them and perhaps it is not even completely incomprehensible, to want to go to their rhythms would be like traveling on a roller coaster, a little bit different, but in the long run it gives nausea, but to a parent does not weigh and with a lot of patience the sense of vertigo passes, the problem is the world that is outside and how much is available to bear this continuous annoyance, hence the problem of inclusion.

A boy's kindergarten companion perfectly synthesized the inability to include saying to the mother: "they are two brothers one does not understand and the other mena."

Including a disabled child means learning to communicate with her, offering her adequate health services and perhaps aimed at containing or eliminating her disability, sometimes with very expensive interventions, cutting-edge tools: “they can only do them in America or in a few other places! "It would have been a long time, but here is the crisis and then how many disabled people are around, after all they will learn to live with it too, but if the disability is multiple?

If you have difficulty seeing, hearing, if you do not talk, if you have some walking problems? Then the thing gets complicated and the social system reacts, goes into protection, the bureaucracy raises a wall, the costs become unbelievable, the school doesn't want to hear about it to lower its standards and therefore even just varying the time course of the school can become an absurd request, without taking into account the convoluted mechanism with which the scholastic support is governed, so that, with the due exceptions, frustrated teachers waiting to climb the merit ranking for the Zalonian permanent job, they sacrifice themselves to be carers for children in difficulty with the dream of being able to get into a chair one day and explain to normal children that the security decree is the same as the racial laws.

And if disability is mental? If there is Autism?

Including an autistic child is an oxymoron in itself, simply because it is he who does not allow it to be done, at least as is commonly understood the relationship or in any case with the normal times of normotypical relations: mistrust, fear of the different, a sense of inadequacy, altered perceptions are all patterns with which an autistic lives daily and within which it is necessary to enter if one wishes to imagine being in his world.

Here, too, the bureaucratic machine takes its toll to obstruct any attempt at integration, always with inadequate schools, untrained teachers and the costs of managing therapies completely borne by families, any attempt at normality is a pious illusion.

Yes because autism is not a disease, it is a disorder and as such it does not have a cure, in such conditions the treatments, even if entrusted to scientific protocols, are a bit like the zyguli, you sell them in pharmacies, but you can't do them prescribe by the doctor and then proliferate ONLUSS, meritorious for charity, but that disperse resources and professionalism in streams and local revolts with the aim of calming the costs of paid therapies and in order to create more or less structured moments of socialization, but always always little spontaneous, all seasoned with collected funds and too much indifference which gives this mammoth private effort the semblance of a golden cage, is the sugar that covers the bitter pill of segregation reserved for mental disability, other than inclusion.

What a complex situation and how many like these fill the national territory, sad and terrible in some respects, one would say a fury of fate, yet faced with situations like these, similar and sometimes even worse families struggle, trying in vain to involve competent ministries and not, officials in charge and responsible managers, but always having the feeling of confronting people who think they must manage a mammoth rupture of soul, a thought that also reigns in the minds of employers of parents of disabled children, because the needs of these families are perceived as real disasters, like maternity, so if the ghetto cannot be fired better with behaviors and sentences beyond the limits of mobbing, also because the 104 law of the 1992 is a monster of thirty, never adapted to modern times and widely abused by a band of lazzaroni ready to simulate just to get a few hours of permission from transc horror in the inertia of one's own obese stupidity.

Speech complex and certainly not compressible in these few lines, but of which Mrs. Trenta knows absolutely nothing and that is why she allows herself to invade a minefield made of silence, rejection and suffering, four wheelchairs and two mayors will certainly not suffice to make the 2 June a dignified Republic party before it is inclusive, it is not correct to throw the stone and then hide your hand on social networks by stating that the inclusiveness consists exclusively of the aforementioned four wheelchairs, if only because those who are nailed to those aids are not correct to be used as a living progress advertisement.

But you will see, everything will go well at the fashion show and we will be surprised to celebrate some soldier who has lovingly donated a toy to a child, we will remember this or that ended badly, but not badly for service and now a champion of sport paralympic and other amenities for the use and consumption of an ignorant, insensitive public whose inclusiveness can be measured in the number of parking spaces reserved for the disabled and illegally occupied or in the monstrous quantity of false invalids present in this infamous nation.

It would be the case that everyone is in his place and that ministers do their work silentlyso, just to avoid that untidy phrases spoken in moments of useless euphoria allow to let emerge the pneumatic void of subjects decorated only with beautiful, but absolutely useless chatter.

Immediately after the report on Basibazza's foiba broadcast by the RAI news on 15 July, as soon as the images faded ...
3795
Read

Good morning Italy ... First of all I ask you to excuse this situation ... Like many of you I appreciate well-being ...
3052
Read

Since the beginning of 2020 the Italians have become accustomed to the images proposed by the TG of men in camouflage engaged ...
5091
Read