Home Recommended Letters to the Director The military presence in Sardinia as an effe ... 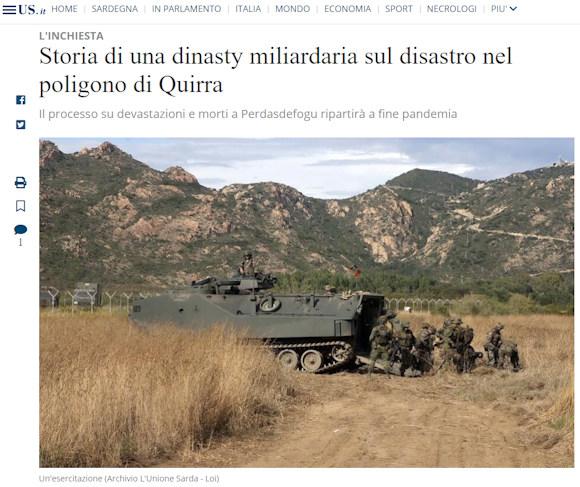 Since the beginning of 2020 the Italians have become accustomed to the images proposed by the TG of men in camouflage engaged shoulder to shoulder with white coats in the fight against the coronavirus or with the police in the mission "safe roads". Disturbing the sequences of columns of military trucks used to transport the victims of Covid 19 destined for solitary burials in distant cemeteries. Meanwhile, in the land of Africa, other soldiers were waiting, and still are waiting, for the pandemic to loosen its grip in order to have a change that is slow in coming.

In this context, it is not easy to understand the rationale that prompted the Cagliari daily newspaper Unione Sarda to launch a new attack between 24 April and 6 May against the military presence in Sardinia and, more generally, against the image of the Forces Armies (including, as a result, the "Sassari" brigade).

Nothing new under the sun, of course, unless the conspicuous space dedicated to this new offensive (six whole pages!) And two significant peculiarities, the first of which is having renounced the old battle horses (or nags o buffaloes what can I say).

In fact, who signs the investigation, the former regional governor Mauro Pili, no longer speaks of depleted uranium (finally confirmed that in the Sardinian polygons a single bullet has never been fired at the UI), nor of fine powders and radon gas (acknowledged that these are substances present not so much in the air of the polygons as in the metropolises: the first ones above all during peak traffic times and during winter heating periods, and the second in the cellars of any home regardless). We no longer even speak of arsenic (clarified that it is a matter of processing residues from the old mines of Baccu Locci) nor is the painful memory of Valery Melis, the poor boy exhibited for years as an anti-militarist flag, brought up again the Cagliari court ruled that his death was due to "causes that had nothing to do with the UI".

The second peculiarity of the investigation is not to make any reference to the judgments of the Prosecutor of Cagliari and the TAR of Sardinia and the deliberations of the regional Arpas. Finally, there is no mention of what has been declared on the subject by national and international bodies and by scientific personalities of the caliber of Franco Mandelli, Franco Nobile and Giuseppe Remuzzi, up to the professors Giorgio Trenta and Mario Mariani.

The "environmental disaster" heralded as a new charge against the military has actually already been filed (clarification omitted by the articulator) with a "no place to proceed" by the GUP of Lanusei on the proposal of the same expert of the court (and not partisan, mind you) Professor Mariani. The author of the investigation therefore had to attribute responsibility for the heralded radioactive pollution to two new agents: missiles Tomahawk and anti-tank missiles Milan, thereby giving rise to two disturbing questions. While the Tomahawks were accused because, according to the investigation, "... was found in the blood of a cancer patient ... steel, silicon and thorium found in Tomahawk missiles ", Milan are instead charged because the driving system contains three grams of pollutant.

The first of the two disturbing questions is: how come nobody in Sardinia has noticed the launch, unbeknownst to the hosts, of a cruise missile with a range of 2500 kilometers supplied to US submarines with nuclear capacity?

Second question: how come the inhabitants of the countries gravitating in the areas of the polygons (who necessarily breathe the air throughout their lives and feed on the products of the earth, milk and meat of the cattle that graze inside the polygons themselves as well as the catch of their coasts) why these populations not only manage to survive radiation but even hold the world longevity record (the Melis brothers from Perdasdefogu), or are counted among the inhabitants in conditions of typical health and psycho-physical efficiency of the fortunate blue-zones of the planet (study on the population of Teulada by researchers Gaviano-Petretto of the University of Cagliari) and finally are they being investigated by the ICC which deals with centenarians worldwide?

The answer is enclosed in an alternative that leaves no escape: or those inhabitants are aliens that can be easily raised on bread and radiation or the radiation that is detected within the polygons does not differ, chatter aside, from those detectable in the remaining regional territory.

Other details that emerge from the six pages of the investigation is to have attributed to the Teulada range the death, in ten years, of 10 of the 52 inhabitants of Foxi, "... fraction attached to the polygon". Cause of death? "Heartbreak deaths ... because in the week before these people had had military activities in front of their homes".

The mention of the now famous is also worth mentioning "Crippled lambs" (however already cataloged by the mayors of Perdasdefogu and Villaputzu as "Sensational falsehoods" and "puzzling non-truthfulness") And a nod to" 167 crosses“, Of which, however, nothing is known unless six first names. Finally, as regards a “... terrible ... devastating ... inexorable apocalypse fire ... damned visible from every hemisphere of the western coast of Sardinia caused by the top guns of the German air force who had chosen the summer to juggle hunting to tear the rocks with a thousand kilo gadgets ... " the reference is to a fire that occurred on September 3, 2014 during a shooting exercise carried out by the German airmen stationed in Decimomannu with the use of the usual inert material which, precisely because such, contains a smoke bomb that identifies the point of arrival in order to verify the correctness of the shot. It was that tiny artifice, and not them thousand kilos bombs destroying rocks, to unfortunately trigger therelentless fire, of which, however, already in the following spring there was no sign. The only real consequence of that fire was that the Germans, perhaps tired of the constant recriminations of the local Pili, definitively left Sardinia together with their lavish wages and also ending their consolidated blood donations in favor of the Sardinian thalassemics.

This is the set of accusations lacking only the insinuation that Covid 19 spared the areas of the Sardinian polygons because it assessed that "... there is no need for me, so much have the military already thought about it!"

However, what is most surprising for this latest attack on the image of the Armed Forces is the absolute silence that followed. The obvious total closure of the island press to any attempt to reply or debate proposed by the writer, was added on silence of political and military leaders, of the same governor of Sardinia and even of the countries damaged economically and from a tourist point of view by the superimposition to their real image of "centenary countries" that of "Chernobyl countries" built by certain press This silence, perceived by the man in the street and by the soldier as a silence-admission, cannot be motivated with the usual illusion that it can serve to dampen controversy or to question the objectivity of the source, however much the investigation is signed by that Mauro Pili who, you can read on his web profile, is known to have been sympathetically renamed by the President Cossiga "the copyist" (or carbon-paper or copy-paste) because of a political development program proposed for Sardinia which in some passages revealed that it had been bovine copied from a document drawn up for Lombardy. In fact, it must be considered that if being defeated by a valuable enemy can be painful, proving to be losers or silent with an opponent of normal caliber has at least a depressing effect on the citizen-soldier.

The Crociani family must also have been of this opinion, the only exception being the general silence, which promptly filed a legal action against the Unidos-L'Union binomial for the accusations of defamation implicit in the titles "Corruption and weapons. Story of a billionaire dinasty about the disaster in the Quirra shooting range". In fact, the Crociani family was the reference shareholder of Vitrociset, present in the Perdas shooting range with a hundred employees who collaborate with the Defense in the aeronautical and space field. Needless to say, this economic aspect, which adds to the approximately 10.000 salaries that the army, navy and air force "spend" in Sardinia, has not aroused the interest of the articulator.

Among the rare signs of "I'm not here" is also the initiative of the president of a section of the association of weapons, Giangabriele Carta, a name known to Pili since on February 20, 2002 Carta, then commander of the Military Region of the Sardinia during the Pili presidency, sent a letter to his counterpart stating that "... the Armed Forces offer the Autonomous Region of Sardinia the opportunity to carry out by any person in charge, at any time, on any day, with any tool ... checks aimed at monitoring the air, soil and water in the Sardinian polygons ".

Above this general context there is a political class completely indifferent to military problems, committed to sharing the very scarce resources available to finance the most pressing needs, among which the financing of overtime for the soldiers referred to in the TG cited does not seem to fall at the opening, while the best fate will fall to the redemption for the "release" of the co-worker on duty, who returned home with a state flight and was welcomed by the highest government offices in his official role of newly converted to Islam absence of authority for the return to Italy of the body of Fabrizio Quattrocchi and for the recent funeral of the Easter policeman Apicella killed by the Roma).

One wonders what the current state of things such as Francesco Cossiga, Franco Magnani, Alberto Li Gobbi, Oreste Viligiardi, Vittorio Santini, Pietro Corsini, Luigi Federici and other Commanders met in the course of my experience think military?

Immediately after the report on Basibazza's foiba broadcast by the RAI news on 15 July, as soon as the images faded ...
3782
Read

Good morning Italy ... First of all I ask you to excuse this situation ... Like many of you I appreciate well-being ...
3051
Read

In these days Italy is facing a serious crisis, which puts a strain on leadership and population under ...
3709
Read