Home Recommended Letters to the Director Fincantieri: did Pinotti wake up?

Fincantieri: did Pinotti wake up? 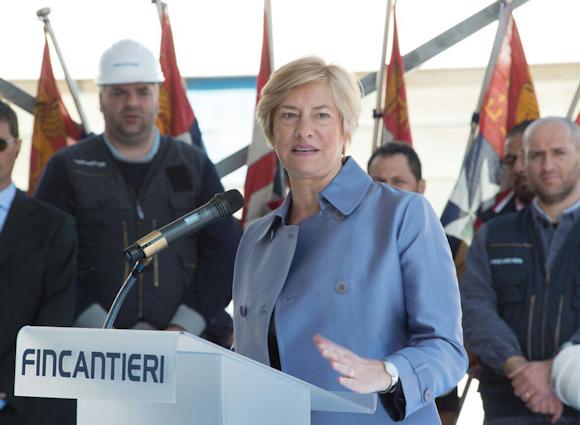 Minister Pinotti, who had been among the first to rejoice publicly at the French proposal to create an Airbus Naval, returned to the Fincantieri-Stx theme in an interview with Repubblica on Friday 15 September. In the text published in the newspaper, we read that after receiving a phone call from someone who explained to her the concrete risks behind Macron's counterproposal for the entire Italian defense-related industrial system, Minister Pinotti decided to intervene again and publicly in the delicate question.

However, the message from the Minister was disarming. In a nutshell: "you have to look good before signing", but Pinotti continues, the operation appears "probably inevitable" (who knows why then).

And then? What is the position of the Defense Department? Certainly for months his direct collaborators, the National Armament Director (the General of the Aeronautics Magrassi), the Chief of Defense Staff (General of the Alpini Graziano) will have prepared memorandums and studies on the consequences of taking control of the Fincantieri military branch and perhaps of Leonardo by the French. The inconsistency and the belatedness of the Ministers' statements would unfortunately lead to the opposite. Also for this reason, it is a cause for concern to find that the Minister at the head of the Italian National Defense needs a phone call (so says the Republic article) of an expert in what should be his subject, moreover on a broad topic current events, to understand the gravity of upcoming choices and to give a sign of life. But this, however bleak, is the state of things. Unfortunately or fortunately, depending on your point of view, we should not expect any concrete intervention by the Minister, for various reasons. The first is that, even if we want to, Pinotti has no political weight. The second is that, unless there are higher orders, she does not take sides. Unlike Sen. Minniti, she does not "put her face".

In short, we must not expect interventions in one direction or another in this affair by the Minister in the Council of Ministers on this issue, despite the fate of Leonardo and Fincantieri are fundamental for national security. Indeed, the interview appears to satisfy a need for image rather than anything else. In case Bono wins (CEO of Fincantieri, ed) and the French, Pinotti will be able to say that it was she who overcame the mistrust of Calenda (which seems the only one to have clear the imminent danger); if common sense and national interest were to prevail, he could try to claim the merit, pointing out that she was the one who said "look good" before signing. With the nearby elections, Pinotti probably fears Bono's wrath and at the same time cannot pass like the Minister who blessed, without blinking, the transfer of control of Leonardo (ex. Finmeccanica) to the French group Naval Groups / Thales (main competitor of the Companies of Leonardo).

Pinotti aside, let's remember the terms of the problem. We started to buy St. Nazaire to eliminate an annoying competitor of Fincantieri for the large passenger ships, but we ended up discussing a French proposal that involves paying us the debts of the St. Nazaire shipyard, without acquiring the majority of the property and in more than giving up control of Fincantieri military and Finmeccanica (at least weapons and command and control systems) to Naval Groups / Thales.

The occupational levels of Fincantieri in Italy and Leonardo would be victims of this solution. In addition there would be the strategic damage (also in terms of national security) caused by the transformation of the Italian defense industries into subcontractors of Naval Groups / Thales, with a progressive loss of capacity for autonomous planning and protection of software security, etc. exemplary as "memento" the destinies of Selenia Spazio and Oto Melara Missili, after the merger with Thales and MBDA.

The disproportion in terms of turnover in favor of the French group would inevitably transform the operation, which would be defined as an alliance for reasons of image, into the de facto absorption of Italian industries in a system of French governance. In this sense the greater strength of the French government compared to the Italian one, above all on the issues of national interest and foreign policy, would also weigh. It is for example news of Monday 19 that the contracts won by the Italian companies for the reconstruction of the Tripoli airport have been canceled, probably in favor of French competitors, to put pressure on Italy from the militias loyal to Haftar to recognize him a role greater at the expense of Al Serraji, while the families that control Sabrata (which support Al Serraji) have loosened the blockade on the departure of immigrants, to punish Italy for its recent openings in Haftar. Not really a brilliant situation.

Anyone who deludes himself that Naval Groups and Thales, once they have acquired control of the military Finmeccanica / Fincantieri, make the interests of Italy and its citizens are wrong, as Macron's behavior on the Libya dossier should remind us.

That France is pressing for Italy to fold is understandable. Macron is protecting the French national interest. He's doing his duty. It is less understandable that the Chief Executive Officer of Fincantieri, a company owned by the Italian State, seems to be rowing in the same direction.

There is a suspicion that there is a question, taboo, of "life or death" that seems to commit the top of Fincantieri in a race against time, before knots come to a head.

What could these "knots" be?

We admit, as pure mental exercise, that it is true that Fincantieri sells Passenger Ships at a cost, in order to obtain the maximum number of possible orders (and the related payment advances) to compensate, even if only in a transitional phase, for a serious financial difficulty of its budget.

We therefore assume that the "construction loans" (the loans obtained by the banks against new orders, necessary to acquire equipment, steel etc. for new buildings) are entered in the assets and not in the liabilities (as European legislation prescribes). In this case, instead of boasting a positive balance, Fincantieri would be heavily in the red, according to some for around 1 Bn. €. This would be what Americans call a Ponzi's Scheme (https://it.wikipedia.org/wiki/Schema_Ponzi). A kind of chain of S. Antonio that holds up until the losses due to the delivery of the finished ships do not exceed the amount of the advances for the ships in order (without considering the question of the correctness of the Budget under the legal profile).

If this hypothesis were true, the situation would be aggravated with each delivery from the ship to the customers, because it would occur at a loss, without counting any economic consequences for disputes for delays or defects found on delivery, which would risk blowing up the "system" prematurely.

The picture is aggravated by the difficulties encountered by the VARD shipyards, imprudently acquired recently by Fincantieri, despite the obvious reduction in demand for specialized oil and gas vessels due to the expected (and successful) achievement of energy self-sufficiency of the United States. To avoid its collapse Fincantieri is forced to divert to VARD, orders of passenger ships, whose size would be fully within the potential of Fincantieri's factories in Italy.

This would explain the stormy departure of the General Manager of Fincantieri, Ing. Mangoni, after only 8 months from the nomination, compensated with 3,5 million €; really many for such a short period. Could it then be true that the rumors circulating at the time that attributed the clash with Bono to the refusal of the new Director General to sign the Fincantieri budget? If these hypotheses were true, Bono's haste would be better understood. He would be sitting on a time bomb and with him Cassa Depositi e Prestiti. Each ship delivered would bring Fincantieri closer to the default unless it was able to reshuffle the picture of industrial identities into a new international subject, in which no one would have the opportunity to unravel the intricate skein of Bono's accounts.

That's why the French are so bold. They know that Fincantieri would set itself on fire to close the deal. Costs what it costs to Italy.

A slowdown in the market would be enough and Fincantieri would crumble, a Parmalat novel, like a giant with feet of clay and with it would end up overwhelming even the small Calabrian king. After surviving Efim and Finmeccanica, Bono could save himself again by abandoning the ship before it sinks, jumping into a new chair.

The important thing is to do soon, no matter if at the cost of sacrificing Fincantieri, to hand over to the "fraternal friends" beyond the Alps the control of the last great Italian defense companies and above all the "keys" to the national security of our poor country.

The moment is propitious. The elections are close and we can save those who can, each for himself etc. etc ...

"In matters of the army and the like we are notoriously poor and, when they call us to participate in missions to ...
3131
Read