Home Recommended Letters to the Director How Italy sees its FFAA between on ...

As Italy sees its FFAA among honors, clichés and myths to be debunked 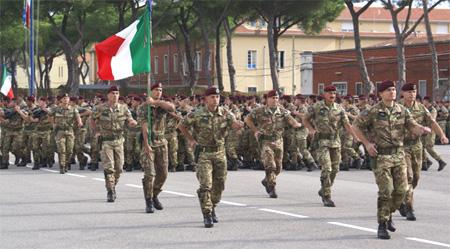 The military world, as we know, has always been seduced, betrayed and abandoned. The fascination that uniforms arouse is subjective: who loves them, who dresses them, who remains indifferent to them and who with an almost unnerving naturalness reduces their existence to a simple demonstration of strength of the State.

From this point of view Italy is experiencing an ambiguous, often grotesque situation, fueled by incompetent politicians, confused citizens and fake news.

A part of the population still grants, to the uniforms of this country, a purpose, which is not known.

The roles of the various armed forces and civilians have overlapped and overlapped in recent years, so we found ourselves with camouflage to shovel the garbage, the Navy to act as ferryman in the Mediterranean and the Carabinieri who are competing for jurisdiction with the Police of State.

In this chaos, great respect is paid to respect for the traditions and honor to the fallen that every war has brought with it. Every year there are hundreds of ceremonies and anniversaries dedicated to those who, in order to safeguard the interests of this country, have paid their commitment in cash out of their own pockets. Behind the face of the Bel Paese, loyal to the memory and honor of our armed forces, there is a dark side that does not even want to hear about uniforms. It is the protesters who see in the State and in the legitimate holders of the use of force an enemy to be defeated, who consider the military citizens of series B who have sold themselves to the authorities by suppressing the freedom of the free citizen. All are good at being anarchists until they you rob the house, then you all become a little more realistic and it's another story!

However, analyzing the question closely you understand that the blame for this total divergence of opinion is not only the fault of the rantings of impromptu analysts but also the top of the Armed Forces that, over the years, have never explained what lies behind the their history and their traditions, creating misunderstandings and tensions between the two distant worlds.

In the last ten or fifteen years there has been an exemplary opening of the military world towards public opinion, it is a pity that everything has dissolved in a soap bubble when we let the imagination of us citizens wander about what was behind the military traditions.

Very recent is the case of the choir - let's call it "colorful" - which featured some former paratroopers on leave and some currently in service, thrown from the web and blown up on TV and newspapers; history has taken the usual discounted contours of a legacy tied to the twenty years of the brigade itself.

Dead in the silence of the institutions this story was inflated by the national media, when to remove this mountain of illogics would have been enough an official note of any press officer who finally gave the right balance to things explaining that the "red flag" to which you do reference is a goliardic allegory to the flag of the infantry - always red, like the insignia of the specialty.

The issue of the Odi et Amo for the armed forces is a much more complex situation than is conceivable, studded with misunderstandings, clichés and inappropriately used terms that have led to a substantial fringe of the population to think that Defense and the Armed Forces are something far from everyday life that Italy can do without.

But can Italy really do without its Armed Forces?

Avoiding the inconvenience of Kantian and International Politics concepts, a very simple reasoning could be made, the Armed Forces are essential to the life of a country because by their nature they arise from the need to stem a tragic situation such as the War and can be used - with the due limitations and protecting the dignity of the men with the uniform - in the national territory to contain as many complex situations sometimes poorly managed by the civil branches in charge. Unquestionable is the priceless contribution that the military gave during the Genoa flood; during the earthquake in the Aquila of the 2009 in coordination with the other organs of the State; to maintain our "Safe Streets" and to support the people in crisis in case of need.

All this was possible not only thanks to a precise and conscious use of the means supplied but above all by intensive training and a clear and efficient chain of command. The immediate reactivity and the ready employment in every part of the world and on the national territory makes of the military instrument a precious resource that we can not afford to lose or to abandon adrift.

Although the sides are two and well distinguished between those who love the Armed Forces and those who want to see the role minimized, it seems that the guideline for our country is more than clear: rather than pursuing a defense investment policy means perpetrate a policy of cuts and reductions considering the Armed Forces and their use a real luxury.

Before making cuts to the funds for schools and hospitals it is thought to make economy by cutting the appropriations for personnel and means of the Armed Forces now reduced to work in conditions that would be considered scandalous in the civil world and would have been criticized and strikes.

The Induced Defense without investments risks losing a turnover of 20 billions of euros a year and more than 4000 direct jobs and about double for the indirect one, few but significant figures that bring our country into a leading position in the field of armaments for defense and that reward research efforts to improve existing technologies. At the base of the evident ostracization of Italian military policy there is certainly a misunderstanding and above all a fear of falling back into a militaristic and war-warming spiral that our country has already witnessed decades ago.

The great deal of confusion in exposing the needs of our country in terms of security and defense leads us to predict that those who are not experts know that something obscure, complex and cumbersome is hidden behind the use of the armed forces. The transparency and the linear explanation of what are some basic concepts of this delicate sector would be a good start for everyone. Unlike how many paint it, the military instrument and the military itself do not perform miracles simply because they are ready to go and know how to handle complex situations. Reasoning constructively and avoiding slipping into clichés nowadays what the military is called to do is no longer just the true art of war, but it is required a role of peacemaker, we could call it an area stabilizer that flattens the road to diplomatic and humanitarian intervention allowing them to work safely.

No one in the current state of history can guarantee the security of an entire humanitarian and diplomatic organization disarms and without protection in a crisis zone where the counterpart is armed with pieces of regular and non-regular weapons.

In the common vision those who deal with Defense or dress a uniform are automatically a worthy supporter of wars, weapons and the pleasure of taking life from another human being.

Perhaps the time has come, especially today, the day of National Unity and the Armed Forces to stop and reflect all together on what it really means to work in a particular sector like the Defense and above all to question what the military really do abroad for name and on behalf of our country.

If it is true that a small group of soldiers exalted by a glorious military heritage dreams of war to be enriched by doing their job, it is equally true that most men who wear a uniform want to improve this world like any of us.

They are fathers and mothers of families who have helped thousands of children, rescued families from the mud and made sacrifices that few know.

Today we want to go beyond the polemics and divisions, beyond the political colors, the sides and the power games. We want to remember who gave their lives to bring home his colleagues as the major La Rosa whose example should be taught to all without distinction whether military or civilians, we want to thank those who overseas represent our tricolor and proudly hoisted on his actions daily which have brought our flag to be a symbol of humanity, courage and honor.

A heartfelt thanks goes to all the volunteers of the troops, the non-commissioned officers and the officers who in Italy get together to do a glorious work with their heads held high, despite all the worries, problems and anguishes that life offers us all.

Today we want to sincerely thank all the uniforms of Italy because even if they did not fall in love all the inhabitants of the Bel Paese surely they make to beat the heart of all those that are still proud to be able to say Italian.

One of the main lessons learned from the war in Ukraine is the need to enhance vehicle protection ...
12864
Read

The Ukrainian crisis and the consequent possibility of the involvement of the Italian Army in a high-level conflict ...
8681
Read