Home News armed forces Our Story The war on the seas between the British and the ... 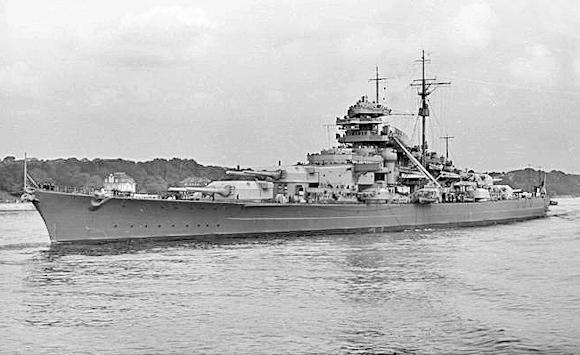 In May 1941, the United Kingdom and its people dominion they found themselves without allies, almost two years after the start of the Second World War. France was defeated and humiliated and the British army was driven from the continent.

The situation was quite dramatic. German planes bombed English cities every night. The United States, a friendly nation, remained neutral and the Soviet Union was still tied to the Molotov-Ribbentrop Pact of 1939.

At sea the situation was not the best as the Atlantic was threatened by German submarines. In addition to all this the British feared and knew that, sooner or later, the battleship Bismarck (considered by many to be the most powerful of warships at the time) would make its first sortie. 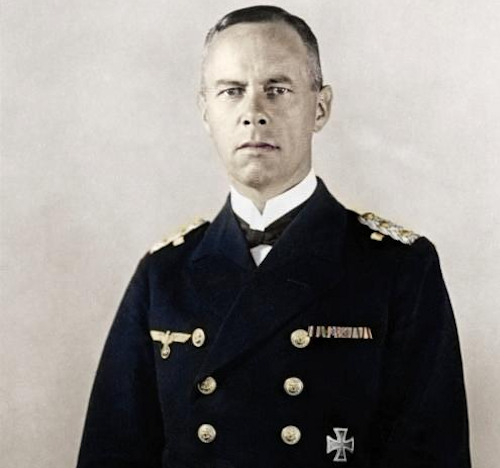 On May 18, 1941 the Bismarck sailed from the Baltic under the command of Admiral Gunther Lutjens (photo), together with the heavy cruiser Prinz Eugen commanded by ship captain Helmut Brinkmann. The ships were thought to be heading into the Atlantic, and that they would point across the Strait of Denmark that separates Iceland from Greenland. That area was patrolled by British cruisers Norfolk e Suffolk, who managed to spot the Bismarck May 23th.

Overwhelmed by the firepower of the German battleship, the two British cruisers were eventually forced to disengage and leave but the British navy was determined to face the threat with all the forces at its disposal. In fact at the mouth of the Strait the naval team of Rear Admiral Lancelot Holland operated, which was made up of the battle cruiser Hood, commanded by Captain Ralph Kerr, and the battleship Prince of Wales, commanded by Captain John Leach, with 6 escort destroyers.

The clash occurred at 5:30 am on May 24, 1941, at the southern outlet of the Strait of Denmark, approximately 670 miles northeast of Cape Farewell. At 5:52 am Admiral Lutjens broke the radio silence, which had been maintained until then, and transmitted to the German naval commands: "I am engaged by two large ships".

The two enemy naval groups opened fire almost simultaneously on each other, about 22.000 meters apart. There Bismarck and Prinz Eugen they focused on the cruiser Hoodinstead, the Prince of Wales e Hood on the German battleship. The exchange in very intense fire and at 5:56 the British battleship hit the Bismarck passing it from side to side in the bow and causing it, a leak of one and a half meters, from which it began to lose fuel and take on water. Meanwhile the cruiser Prinz Eugen hit him Hood detonating a pile of anti-aircraft ammunition.

At about 6:00 the battleship Bismarck opened fire on the British cruiser and a single 38 cm shell entered the hold, exploding the ammunition reserves, and the explosion spread to the fuel tanks causing a jet of flames of about 400 meters. In a short time the cruiser Hood it exploded, breaking into two sections (photo). The tragedy was such that of the 1.415 crew members only 3 managed to escape. Admiral Holland sank with his ship. 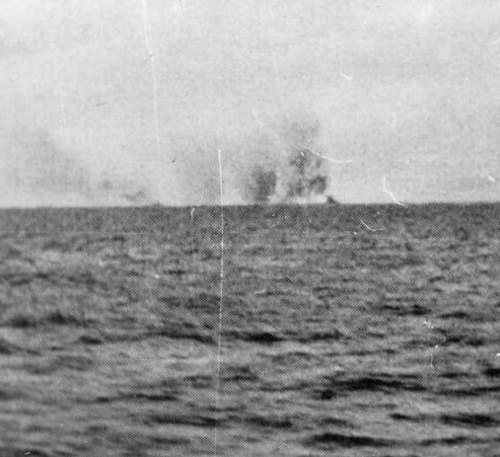 La Prince of Waleshit several times, she managed to disengage thanks to the thick smoke screen she left behind.

The confrontation had not lasted long. At 6:32 am Admiral Lutjens broadcast: "Battle cruiser probably Sunken Hood"; he also reported that the other battleship had managed to escape the battle and that the usual two cruisers continued to maintain contact.

La Bismarck it was slightly damaged. It was no major damage, but now her top speed could not exceed 28 knots and she lost enough fuel to induce Lutjens to abandon his mission in the Atlantic. In fact, around 8:00 am the German admiral reported to the command his intention to reach Saint Nazaire, on the coast of France.

The Germans knew very well that the British fleet would be unleashed against them, as the cruiser had been sunk. Hood (considered at the time the most prestigious ship in the UK). Meanwhile Lutjens established that the cruiser Prinz Eugen he would have continued the racing war alone, since he had emerged unscathed from the clash, and waited for the right moment to unhook it.

Meanwhile, British Admiral Tovey, head of the Home Fleet, was sailing at full speed to intercept the opponent and it was also calculated that the interception probably could not have taken place before 7 am on 25 May. The naval team consisted of King George V, Victorious, Repulse, 4 cruisers and 7 destroyers.

Meanwhile, the British Admiralty ordered "Force H" commanded by Admiral Somerville, based in Gibraltar, to move north. To the battleships Rodney e Ramillies, who had the task of escorting convoys one to America and the other to the English islands, were ordered to abandon their mission and head for the Bismarck. In addition, the battleship was brought out from Halifax, where it was Revenge. While the cruiser arrived from the south Dorsetshire.

So the situation in the Atlantic Ocean on May 24 was like this: while the German naval team was still sailing south, the Prince of Wales, the cruisers Norfolk e Suffolk, and 6 destroyers were behind him trying to keep her always in contact; from the northeast was coming Home Fleet; from the east the Rodney with 4 destroyers; from the south the "Forza H" and the cruiser Dorsetshire and finally from the west la Ramillies and Revenge. The hunt for the great battleship Bismarck it had begun. 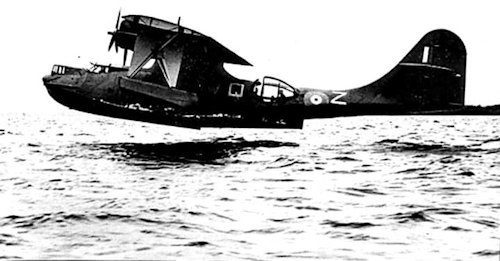 In the early hours of May 25 the cruiser Suffolk, which was following the German battleship on its radar, lost contact. At first it was thought that Admiral Lutjens had veered west, and so he was pursued in that direction. In reality it had diverted to the southwest and the goal was to try to get to Sant Nazaire. Finally, around 10:30 on May 26, a plane Catalina (photo) of the coastal command of the Royal Air Force managed to find the German admiral. The plane came under fire, but the crew were able to report that the German battleship was nearly 700 miles northwest of Brest. Later the British seaplane was shot down by the Bismarck. At that moment the Home Fleet commanded by Admiral Tovey, it was about 130 miles north, while Rodney was closest. In the best position, however, was Admiral Somerville's "Force H", which was just over 100 miles to the east, thus on the route of the German battleship. Since the naval attack could only be conducted by the Home Fleet, as the other formations would not have been able to hold a candle to the Bismarck, the British decided to strike with torpedo bombers in such a way as to reduce the speed of the opponent.

During the night of May 26, 5 destroyers under the command of Captain Philip Vian collided with the opponent, but the attack of the torpedo boats was repelled by the batteries of the Bismarck. However, Captain Vian's ships followed the German battleship throughout the night. 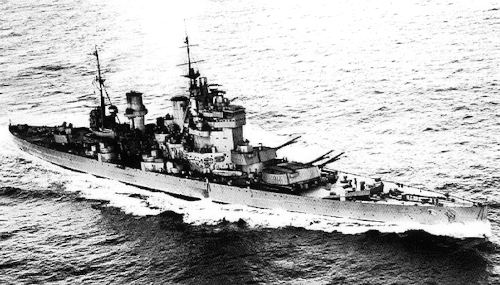 At 8:46 am on May 27 the battleship King George V (photo), Tovey's flagship, opened fire at the same time as the battleship Bismarck at a distance of almost 15.000 meters. In addition to King George V joined the Rodney, the heavy cruisers Norfolk e Dorsetshire and Bismarck it began to be under fire from the big guns. From all sides the bullets were arriving on the German battleship. The shelling went on until 10:15 until the Bismarck it was not reduced to scrap.

When the battleship Bismarck sank, the British cruiser Dorsetshire managed to recover some of the survivors, while others were saved by a destroyer. Still others from German ships. Of the nearly 3000 men who boarded the Bismarck only more than 100 men managed to escape. Admiral Lutjens disappeared with the ship.

At around 12 noon Prime Minister Winston Churchill was able to report to the House of Commons that the battleship Bismarck had been sunk.

At 13:22 the German command sent the last message to Bismarck (who was no longer there): "Reuters announces: Bismarck sank. Report situation immediately".

It should be remembered that the fate of the battleship, in reality, had already been sealed hours before when two torpedoes hit the ship. One of these hit her straight aft, damaging the rudder control device and effectively locking the rudders to the band. Its end came only later.

In the usual melancholy rearrangement of the correspondence of the past year, the eye fell on the file “...
3237
Read

“General maneuvering post”. The first ship to head out of the obstructions of the port of Taranto was Nave Zefiro. There...
1716
Read