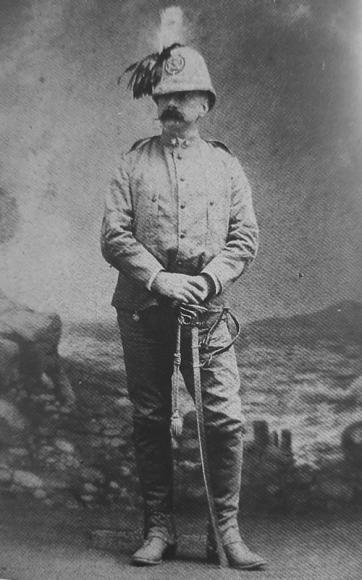 The twenty-year period 1870-1890 was a period marked by two important reforms of the Royal Army, respectively that of Ricotti and that of Ferrero, capable of influencing the doctrine and military objectives of the young Kingdom of Italy.

They were therefore years of great internal debate between officers who many times, on general issues, also involved politicians and economists in the context of a renewed interest of public opinion in military matters.

From 1874 is the monograph "Studies on the conduct of troops and second line services" written by the captain of the 5th artillery regiment Coriolano Ponza di San Martino, a work of primary importance because the Piedmontese officer was one of the pioneers who received and they adapted the teachings of the Prussian military school to the reality of our country.

Ponza di San Martino had been decorated with a silver medal in Custoza when, commander of the XNUMXst artillery section, with "admirable cold blood" he had rejected the Austrian cavalry charges directed against the Italian infantry square in Villafranca, directing the fire of their batteries.

During the unfortunate (and disorganized) campaign of the Third War of Independence, Coriolano Ponza di San Martino had observed with his own eyes the limits of the newborn Royal Army, in particular the cumbersome management of the command line, the relationship with the sub-commanders and bad logistics management.

As late as 1870, the General Staff calculated that the full mobilization and concentration of the Army could take place with a minimum interval of two months and that the land component of the Armed Forces did not have any trained reserve forces.

Quite the opposite, therefore, of the efficiency shown by the Prussians in 1870-1871 against the French in the conflict that opened the age of industrial imperialism and which was extensively studied by the officers of all the European powers, arousing the interest of Captain Ponza of Saint martin.

German military literature, in particular the reports and studies of the officers of the German General Staff published in the military magazines of the Empire, but also "indirect sources" such as newspapers, were privileged objects of consultation and study for the official Piedmontese aristocrat. From head of the General Staff Division to the Ministry of War between 1882 and 1884 Ponza di San Martino will collaborate with General Emilio Ferrero in planning the reform aimed at "cutting out" the Prussian model around the figure of the Royal Army.

The interest in the Prussian model developed from the early 70s, however, found its consecration precisely with the monograph of 1874 which was written, according to the same author, to "contribute [...] to the awakening of activities in military studies "Italians, with the use of French and Austrian as well as German technical-military sources, taking inspiration from a work on the same subject published in Germany in 1868.

In the introduction Ponza di San Martino wrote that "the conduct of the troops, both with logistical and strategic [...] means, and with tactical means [...] has undergone profound changes in our days, of which the main causes are the 'adoption of the compulsory service and the transformation of the armament. While in fact the latter is gradually altering the methods of combat, the fighting masses increased with the first beyond measure, and thus acquired greater importance than in the past, not only the calculations of their movements, but also those secondary services with which their needs are provided, so that, in addition to a more minute organization, it is today an indispensable condition for facilitating and ensuring their functioning the use of all the advances of modern industry regarding transportation, communications, preparation of materials [...] ". The purpose of the 664 pages of this monograph was therefore to provide Italian officers with a theoretical tool suitable for recognizing the importance of logistics and, at the same time, the impact that this difficult science would have on modern warfare.

Aware of the fact that, after the great innovations imposed by Prussia with the wars of 1866 against Austria and of 1870-1871 against France, combat had become only a part of the most complex art of war and that, indeed, success of a campaign depended above all on the ability of the commander to concentrate the greatest number of troops and armaments in the shortest possible time, Coriolano Ponza di San Martino meticulously analyzed the functioning of the Italian "second line services", on the one hand reporting national regulations and studies, on the other hand, making suggestions based on the deepening of what had been written and experienced beyond the Alps. Although second-line services were considered "material" and boring to study by traditional military theorists and many officers, for Coriolano Ponza di San Martino they had become too important to avoid talking about it: "When every officer with a command is able to rightly appreciate the value of the various bodies that operate outside its immediate range of action, so as not only not to cross its functioning, but to contribute as far as it concerns to ensure it, it will be possible to calculate with certainty on the good performance and on the regularity of the process of the rather complicated mechanism that governs the movements of an army in the countryside, and the number of non-calculable factors on which operations depend will have decreased ". A statement in "Prussian" style by the Piedmontese officer who was also convinced that any change born on the battlefield had to be then made by the commanders and "institutionalized" after abundant scientific literature in tow; in particular those "publications of a general nature" to be allocated to the officers of all weapons together with specialized monographs.

In particular, Captain Ponza di San Martino underlined the importance of knowing in depth roads, railways and maritime transport, almost an anticipation of the principles of "total war". Another topic that, like a karst river, unfolds throughout the monograph is that of the chain of command, a topic that Ponza di San Martino will deepen in 1890 when, as colonel chief of staff of the IX Army Corps of Rome, he will publish in the "Rivista Militare Italiana "an essay entitled" The chain of command "and in which it will not differ at all from what was written in 1874.

Although the author considered "Studies on the conduct of troops and second line services" a work destined immediately to be transitory and a mere "collection of data" given the "current crisis of transformation of military systems" (it was in the midst of the radical change imposed by Minister Ricotti), it had particular luck and guaranteed Ponza di San Martino a teaching position at the prestigious School of Artillery and Genius Application in Turin and then to enter the ranks of the prestigious Corps of the General Staff.

According to the Minister of War Ricotti "military power [...] is the product of four main factors which are: the number and quality of the personnel constituting the army, its armament, the army's mobilization material and finally the works of territorial defense, in order of importance "while for Ponza di San Martino all these factors should have had equal importance and evaluated with equal care because in modern war it would no longer be just man who made the difference. Likewise, reading the monograph, one can see the importance that the author reserves for the two "special weapons", artillery and cavalry, which operate not only in a purely defensive function but also as main instruments of offensive action. In this respect, the ideas of Captain Ponza di San Martino come close to the thought of generals such as Luigi Mezzacapo and Emilio Ferrero, two "offensiveists" hostile, even politically (because both are expressions of the historical Left), to the "numerist" Ricotti.

To the mere numerical strengthening of the Army inherent in the Ricottian program, the "offensiveists" opposed a qualitative increase in armaments, equipment and above all artillery and cavalry, exactly what Ponza di San Martino requested in the light of the war experience of 1866 and the progress of foreign armed forces without ever expressing themselves directly in the text but letting it be understood through the description of the actions.

The predilection for attack and counterattack emerges not only in the chapter dedicated specifically to open field combat, but also in those relating to raids and, above all, to the obsessional war, despite Ponza di San Martino analyzing in great detail also the phase defensive.

A reference to the conception of the defensive that emerges from the work of Coriolano Ponza di San Martino still deserves to be made since already in the mid-70s - when the debate on the subject will burst with virulence in the early 80s - he had understood that the Alps were not only a passive obstacle for any attacking army but a suitable scenario for an active defense of the territory by the Alpine companies capable of allowing the bulk of the Army to gather in the Po Valley; just as the Piedmontese officer was a firm believer in the usefulness of the great fortification works in the strategic points of the Peninsula.

These nuances of his thought place him fully among the offensiveists and some general lines of the 1874 book will then be found in the political and military program of Coriolano Ponza di San Martino in the years 1900-1902, when as lieutenant general he was minister of war in the governments Pelloux II, Saracco and Zanardelli.

The lack of specific studies on General Coriolano Ponza di San Martino has probably prevented over the years from appreciating the work of what was one of the most prolific officer-writers and leading exponent of the military elite of liberal Italy. The intuition on the importance of auxiliary sciences in the Art of War and the ability to deal in depth with every single aspect of a military campaign make Coriolano Ponza di San Martino and his "Studies on the conduct of troops and second line services "an integral part of the military public opinion debate at the beginning of the age of imperialism.

PUBLICATIONS ON THE MILITARY DEBATE IN LIBERAL ITALY

Photo: Colonel Coriolano Ponza di San Martino in uniform as commander of the 7 Bersaglieri regiment stationed in Africa in 1887