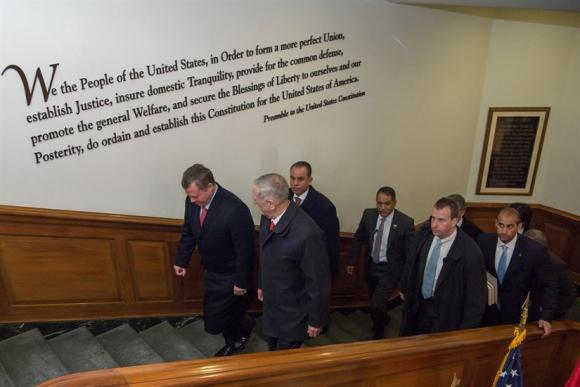 On Monday, the new US defense secretary, Jim Mattis, started international contacts by hosting King Abdullah II of Jordan at the Pentagon. The occasion was seized to highlight the consideration of the country as "strategic for stability and security in the Middle East".

In the interview the two leaders stated that the sixty year alliance "remains even more relevant today and determined to take every measure to strengthen the defense against the continuous evolution of the North Korean threat".

The country, along with Japan, will be the first foreign destination of Mattis.

The secretary finally called the Italian defense minister Roberta Pinotti, thanking her for the Italian contribution to Libya, Iraq and Afghanistan, as well as for the work to defend Europe's southern border.

"The professionalism, the ability and the compassion of the forces deployed by Italy, represent the best that the country can offer. In particular, the carabinieri are carrying out fundamental training work for police forces in various theaters. "

Mattis expressed his desire to remain in close contact with Italy on security issues of mutual interest (in particular on Libya).

Both have gathered at the next meeting of defense ministers to be held this month at the NATO headquarters in Brussels.