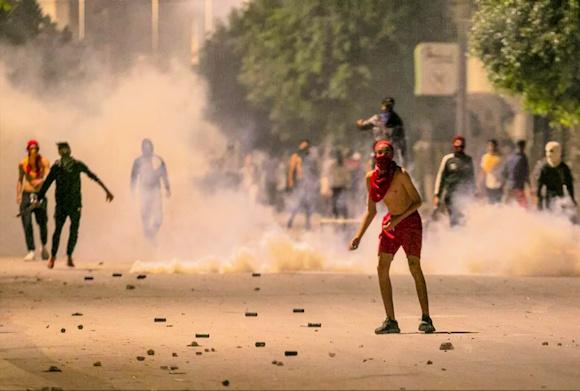 Tunis. Fighting weekend1 between police and demonstrators that of 14-16 October last. In addition to the protests due to the country's serious economic and political crisis, there are those caused by the death of a 24-year-old boy after suffering spinal injuries during a police chase. In the poorest neighborhoods of the capital, Ettadhamen and Intilka, the clashes between demonstrators and police were concentrated, who in riot gear tried to disperse the crowd with tear gas.

The country is suffering from a severe economic crisis where basic necessities and fuel are in short supply. The political situation, moreover, since President Kais Saied took power and dissolved parliament in 2021 is increasingly unstable.

For many, Saied's seizure of power was considered a real one coup d'etat2. On July 25, 2021, the president suspended parliament and dismissed the premier, frustrating the country's democratic process, the only one after the 2011 revolution. On September 22, 2021, the Tunisian president also issued Decision 117 with which suspended the constitution adopted following the riots of 2011 which should have inaugurated a new form of democratic government.

Soon after, Saied appointed Najla Bouden Romdhane as prime minister, the first female figure to hold this post in the Arab world and a new executive who set out to fight corruption, encourage the economy and strengthen the legitimacy of Tunisian institutions.

The fight against Islamic terrorism also remains an objective of the government. Although the frequency of attacks on the territory have decreased since 2016, thanks also to military operations conducted by the Tunisian armed forces and the strengthening of cooperation with foreign states, the risk of new terrorist events remains high.

The demonstrations in recent days are accompanied by slogans against President Kais Saied, whose resignation is called for.

In mid-September Kais Saied enacted an electoral law that reduces, but does not end, the role of political parties in a reformed parliament that will have fewer powers under a constitution approved in July3. It establishes a hyper-presidential regime in contrast to the one in force since 2014, which limited the role of the head of state to avoid regimes such as the dictatorship of Zine el-Abidine Ben Ali. The new text does not provide for a procedure forimpeachment of the president. It appoints the head of government and ministers and can dismiss them without too much formalities.

It is true that part of the population had welcomed Saied's seizure of power, disappointed by the corrupt politicians who had taken office after the 2011 revolution but, the serious economic crisis undoubtedly also exacerbated by the Russian-Ukrainian conflict, led the people exasperation.

Many parties including the National Salvation Front have announced that they will boycott the elections next December in which a new parliament with limited powers will have to be elected.

Tunisian food producers are facing a shortage of basic ingredients, leading to shortages on supermarket shelves and threatening to shut down food processing companies.

The government has reached an agreement with the International Monetary Fund that allows the loan of almost 2 billion dollars. In return, the Tunisian government is committed to putting in place a program of reforms that should intervene to mitigate the serious crisis in progress.

3 94,6% of the voters voted "yes" to the adoption of the new constitution proposed by President Kaïs Saïed. Turnout of 30,5%.

The death toll from yesterday's suicide attack in a "Pakistani" mosque has risen to 89 dead and 160 injured...
2421
Read