Home Recommended Points of view Salvini shot down by friendly fire. But it is ...

Salvini shot down by friendly fire. But is he really the "man" of Moscow? 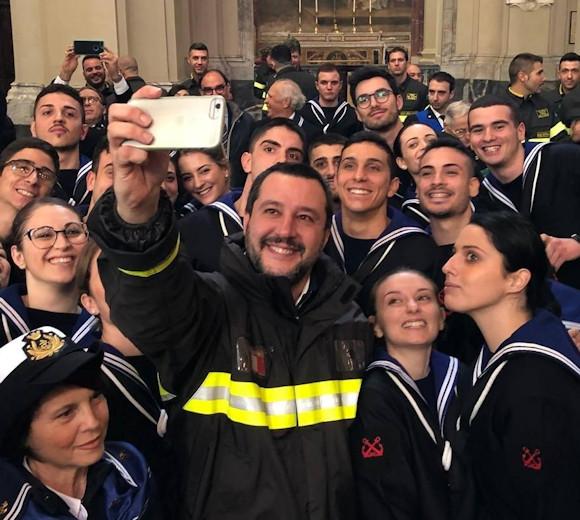 Police Minister: in the nineteenth century the owner of the Interior was called. I wonder if Matteo Salvini, always so ready to wear police uniforms, firemen and ... Sardinian barracelli1, do not think, inspired by the uniform, to investigate the Savioni case, the consultant of the L ... no! Of the min ... not even! in short, the president ofLombardy Russia Cultural Association, so pro-Russian that sometimes in the photos he was portrayed on the side of the Kremlin delegation in the official photos. The police minister would thus discover, in the role of Lieutenant Colombo, that we apparently have a corpse (Savioni: ostracized by his former associates), a smoking weapon similar to that found on the scene of another crime (the sound of an offer for so to speak illicit) and a principal (an American media) ... and all this two months after the apparently similar scandal of the Austrian nationalist leader and the false oligarch. And if the similarities were not such?

As the manuals teach, the perfect crime is a murder committed in the territory and according to the standards of a serial killer with precedents: investigators will spend years searching for a serial murder, without thinking that his wife was killed by a particularly shrewd husband. Once again, we return to the scene of the crime and we realize that the corpse is not Savioni but the almost homonymous one (at least for the foreign press) Salvini, because he is the leader of the League that is framed, not the mysterious gray eminence of the Kremlin. And the murder weapon is not the video, but - consenting or not - Savioni himself, who in the BuzzFeed audio seems to speak apertis verbis to illicitly finance the League during a meeting in Moscow in the presence of business lawyers who said they were strangers to games. And that the recording started from one or more members of the Italian delegation, frankly, it seems unsustainable: the Russian services are in serious crisis or they themselves have produced audio. Neither more nor less than how the Turks recorded the Khashoggi massacre in the Saudi Consulate or how the Americans recorded the conversations of European allies. Of the two, one: o Savioni knew of the recordings (and so the weapon, as he said, is he) or the Russians have unloaded it.

Now, it is true that there is a public agreement between the League (at the time, the Northern League) and United Russia, the political party of Putin, which provides for consultations and exchanges of information on current issues, international relations, exchange of experiences in the sphere of youth policies and economic development. Salvini himself announced in the 2017 that he considered you included "the fight against illegal immigration and the pacification of Libya, the fight against Islamic terrorism and the end of sanctions against Russia". So, children also understand that everything, but just everything the Interior Minister and his party say and decide is legally and officially shared with the entourage of the Russian leader.

That today, therefore, money is asked to do what the agreements - photocopies of those with Austrian sovereignists - signed in the past allow Moscow to obtain for free, it seems strange2. Why should Moscow today buy with the money what was granted to them for free? Then why dare a request for cash in an economic negotiation not even certain as an outcome and in fact, according to lawyer Meranda, present that day, not even successful? And finally, how to think of spending about sixty million during a national election campaign without anyone realizing it? It is not that Salvini as deputy prime minister has the power to print money at night: if sixty million are thrown out, even the most unprepared understand that the Northern League leader did not win the lottery!

Now, one detail deserves special attention ... As also in the times of Letta and Renzi, the Italians try to keep their feet in two brackets, signing the protocols of all gas pipeline projects, even those competing with each other. No wonder Salvini tries to do the same, saying yes to Moscow and Washington in the same way. No one deceives you: the "feeling" of Donald Trump for the "macho" Putin does not change Washington's attitude, which is to contain the rebirth of a new Russian empire around the world, at the cost of besieging Russia in its territory . If your neighbor gave you trouble in the past, you too would be wary today: it is useless for you to see the bad Yankees and the poor Russians.

That said, in the US, probably, you are willing to turn a blind eye to Salvini's "escapades" with the Russian leader as long as Italy pulls the League in the wheels of the European Union with a Franco-German leadership and In fact, it does not do anything truly favorable to the Russians. It is one thing that Salvini applauds the annexation of Crimea, which does not change the strategic balance: another thing is that it disturbs American forces or brazenly favors the Russian hydrocarbon trade.

In Moscow, however, one might have wondered if the game is worth the candle: how much is the friend of Via Bellerio really worth? Thus, impallinato by the friendly (Russian?) Fire, Salvini finds it hard to close the experience of the Conte government and pass to the collection, fearing new and more aggressive scandals. The Five Stars, sly and interested, are watching and - saying they are interested only in Italy - they are careful not to ask Salvini to prove that he has moved away from Moscow, because it would mean taking sides themselves in favor of MUOS, TAP, F35, Guaidò, that is to take an active position that does not favor the interests of the Kremlin. Yeah, but in hindsight ... who really does the Russian game? The League of Russian-speaking small talk or the Five stars that continually score in favor of the Russian team?

Now, in conclusion and in the light of what has been said, once identified the victim, the weapon and the principal, one wonders: who benefits from all this?

PS yes, readers friends, this question concerns defense and national security. Indeed, if this story is not a question of security, I do not see what it can be.

2 It should also be added that those who know a bit of Russian history - from the time of the Zar - know how good they are in those parts to penetrate into organizations that offer a collaborative attitude: with a generation of local and national leaders bind "bred" by Moscow, in Italy the Kremlin will constitute a malleable and collaborative structure like the PCI of Togliatti.

Those responsible for the not exciting national policy, made more gloomy by the gloomy economic prospects, recently ...
2375
Read