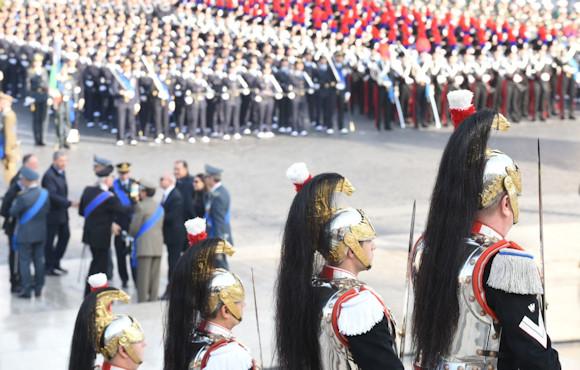 Hymn to uncomfortable thinking. Generally the uncomfortable thought looks like the hit of the witch: it is there, hatching, and then suddenly it leaves you folded in two while you are fastening your shoe. While you are out of breath you think about how to do it; the problem lies in feeding the brain. If it comes to the back, take the famous pill (feel to me), but if it is uncomfortable thinking it becomes much more difficult, since the cerebral vertebrae are much more mangy, other than voltaren!

In these last years of uncomfortable thoughts, which generally follow the trend of the salmon that goes against the current, several have emerged, and all more or less fallen by the wayside.

The military are no exception. Anyone who expresses an opinion away from the majority current if he is lucky is forgotten, otherwise he bears the logo of the nuisance (if it is okay).

Let's start from the upper floors: Admiral Birindelli and, more recently, General Bertolini: what could be more out of the scheme than to declare oneself more or less openly incorrect? Which commander would now have the courage to let MPs experience the same experiences as his crew? After all, if a soldier, as Bertolini says, can only be sovereign, but what bank would he find? Madness! The military is a necessary evil: when needed it must be found, then everything is finished, it can even disappear.

In Sicily they seem to have remembered it with Covid need almost over when they granted the facilities for public transport to the military. It is true that the average Italian has always been attracted to uniforms and little to duties, from the orbace to the civic guards passing through the VAFs of Marshal Capurro of the two Marshals of Totò and de Sica the step is short ...

But is it all the fault of this terrible cruel world? Not entirely: the cruel world plays a role not even secondary, since everything that influences and decides also in the military world is there; however it is also true that the military world does not seem to do much to avoid giving impressions that leave at least confused.

Colonel (and astronaut) Parmitano retracted the statements he had made on two different occasions about the pandemic: there is doubt that Parmitano, although an engineer and expert in space, is no longer able to fly between the stars, as he quickly forgets what he says.

Then there are the news that describe current account regulations between aeronautical generals and admirals, with the latter destined to lose (not the pens because those belong to those who fly).

Let's face it, is not that the image that comes out is so positive, let's say it continues to leave at least perplexed: in the face of unity!

Since we do not miss anything, we also remember the chaplains; some time ago the chaplain who had been sent to Iraq had written to his leaders, protesting for a letter with which the leaders themselves asked to cancel John XXIII from being patron of the Army. It is true that the chaplain wrote from an internal world because he was a military anyway, but perhaps his doubt also left his external world, also because in the end the chaplains paid them by the same administration that seems to have no right to have the patron ( for those who believe it).

Total of doubts: but isn't it the same internal world that creates problems on its own? Is it not that in the famous internal world there are those who do not realize what is created outside, perhaps leaving alone those who, unfortunately for them, remain outside?

The risk, however strong, is that those who remain closed out will see many small and large courts that look only inside them, in a very narrow field because, in the end, it is not even true that all those inside are well: it is a matter of nobility, if you don't have it you almost prefer to stay outside.

Those responsible for the not exciting national policy, made more gloomy by the gloomy economic prospects, recently ...
2377
Read

Did Russian intelligence agents also come with help? This is the question many have asked after reading ...
5723
Read

"I have no idea what weapons will be needed to fight the Third World War, but the Fourth will be fought with ...
1815
Read