Home Recommended Points of view One hundred days of war in Ukraine are already ... 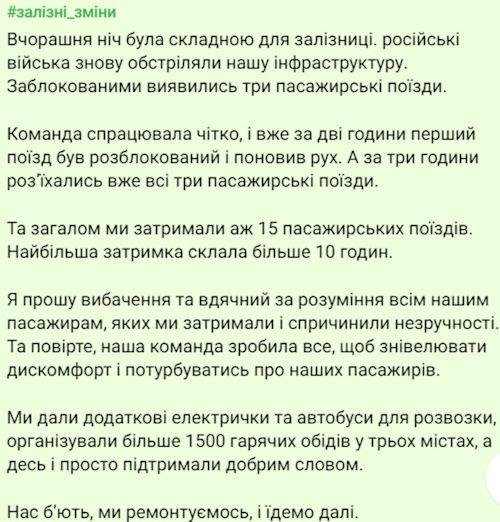 Today, June 3, what seemed impossible on February 24 has arrived: the hundredth day of Russia's war of aggression against Ukraine or, as the Kremlin calls it, "special military operation". I believe that powerful symbols of what has happened and is happening are in three small events of the last 24 hours, in turn represented by three photos: these events will not change the course of the conflict but help us understand how we got to where we are and where we are. what direction are we going.

Yesterday, this message (opening image) was transmitted via Telegram by Olexandr Kamyshin, CEO of the Ukrainian State Railways. In practice, it communicated to users that two hours after a missile attack started from the Black Sea and aimed at a junction of the Ukrainian railway lines in the Lviv Oblast, on the border with the Carpathian region, the movement of freight trains that had remained blocked had been resumed after two hours and that after three hours even that of the passenger trains had returned to normal, albeit with a certain delay. It is not the first time this has happened: we could say that it happens almost every day and that it is not "war marketing" you can see it from the billboards in the stations and that if it were it would be easily discovered, since it would deceive the travelers themselves.

Why does a simple message on Telegram have a symbolic value? Because the reconstruction and consequent reactivation of a railway network requires that the Russians are unable - due to the scarce availability of missiles and the danger of using air force in depth - to prevent the Ukrainians from carrying out operations aimed at maintaining the function logistics, very strategic for the purpose of transporting armaments from the Western allies, but also of personnel and vehicles. Although Moscow has always claimed to have supremacy or, to put it mildly, at least air superiority, this claim of power is contradicted by the continuation of rail transport in Ukraine. On the other hand, how many missiles and how many aircraft should be used to make a network of 23.000 kilometers inoperative, that is the thirteenth in the world for length? Certainly more than Moscow can afford to invest. And the railway network is one of the secrets behind the exceptional resilience of the Ukrainians. 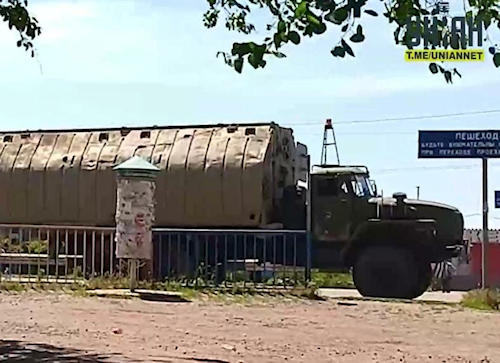 Today, however, the second symbolic photo of these hundred days of war.

What you see are pontoons, i.e. cylindrical containers made of metal, hollow inside and used as a base for a temporary bridge or floating dock.

Russian troops have recently suffered heavy and repeated losses in crossing the Sivirskyi Donets, a western tributary of the Don which has often made it difficult for the Russians to move to the part of Luhansk oblast bordering that of Kharkiv.

We have already spoken of the loss of many hundreds of men and means at the beginning of May in just one of these nefarious attempts (see article). Now, again, the same cursed river comes to interpose itself in front of the advance of the Russians towards the West: it stands between Severodonetsk and Lysychansk and threatens to cost dearly to the daredevils who will dare to cross it again, even considering that in this last town, located on high ground, the Ukrainians will enjoy the advantage of being able to strike from the top down. The pontoons seen in the photos are headed right there.

The third symbolic photo represents the visit of the President of the Parliament and - de jure - Vice President of Ukraine, Stefanchuk, to the German Chancellor Scholz. It is no coincidence that one of the rare appearances abroad of the "high poppies" of Kiev takes place in Germany, one of the European countries with more interests in common with Russia and less inclined to seek solutions that undermine the leadership of Moscow . 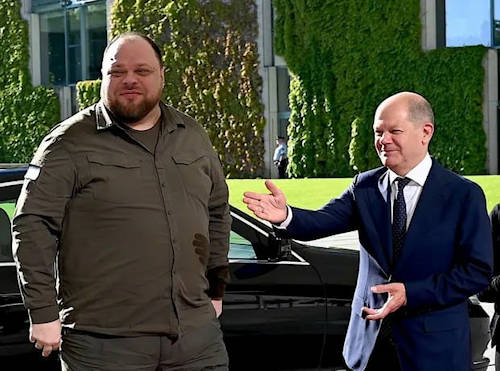 There is a group of states that are not affected by economic relations with Russia: the United Kingdom, the United States, the Baltics, Poland, Japan, etc. These perceive the challenge launched by Putin on February 24 in a very different way from another group, always from Western countries but with heavy interests, so to speak, with the Kremlin: we are talking, for example, of Germany, Italy, Hungary, etc. They can't wait to get back to "business as usual". And Berlin is the first of these.

In the second half of 2022, Western support for Ukraine will be measured in the strength with which the former will be able to dictate the line to the latter, as has happened up to now, for 100 days.

Finally, a digression. This photo (below) - complete with the photographer's finger in the middle - is from today and portrays the master father of peaceful Chechnya, Ramzan Kadyrov, during an official - and friendly, it seems - visit to Defense Minister Shoigu. It is the first time, frankly, that we have cast an eye wide into the room from where Putin's staunch minister runs the Russian armed forces. We were struck by the large number of toy soldiers and models present: it reminded us of the potešnye or "toy army", a perfectly equipped military body according to the most modern canons of the time, used to stage military exercises and mock battles in the gardens of the residence of Peter the Great. Considered the most loyal military body to the tsar, after Peter's full accession to the throne in 1689, the potešnye formed the basis for the formation of the Russian imperial guard. But many "toy soldiers" also bring to mind the short reign of Peter III, the unfortunate husband of Catherine II, tsar more passionate about the game than the practice of war, who lost his kingdom (and his life) to an infamous peace treaty. with Prussia. 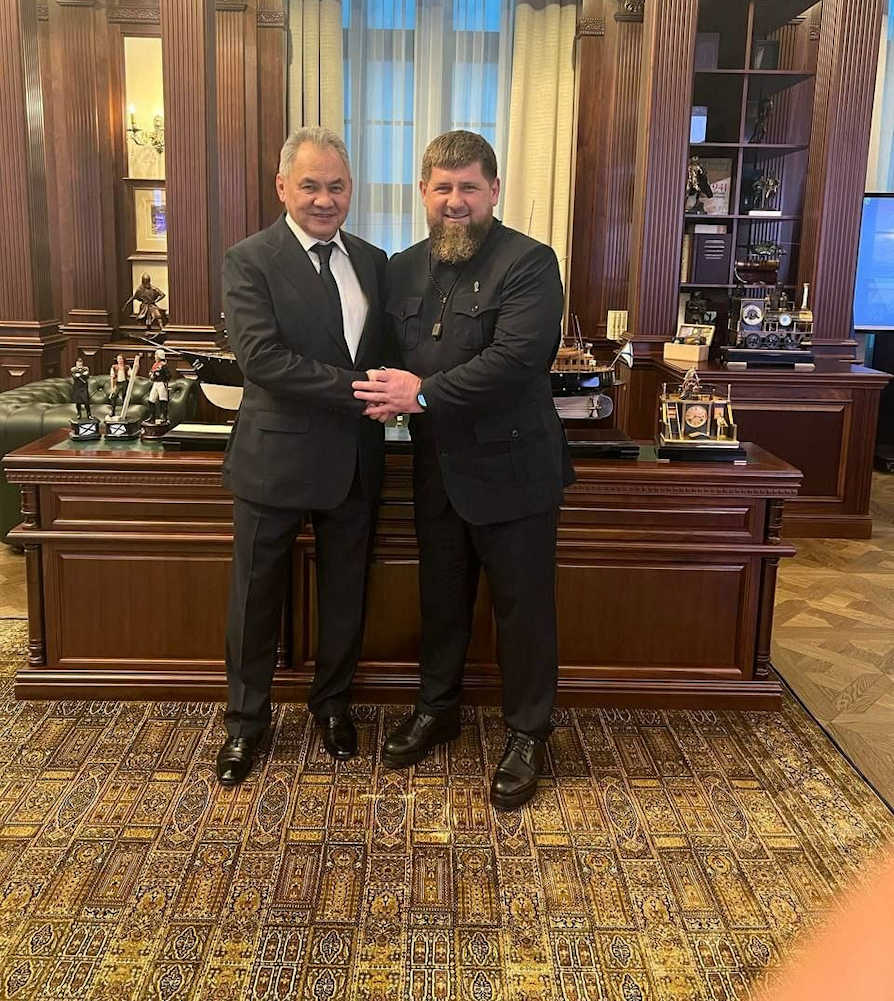 How many times have we heard phrases such as "Some young people would need military service" or their more ...
3675
Read

Who remembers the fall of the Berlin Wall on November 9, 1989? A few months earlier, Honecker had predicted in January ...
5722
Read

When you use a weapon or apply a tactic in war, you do it for one reason only: it gives you an advantage in winning or, if ...
5248
Read

Put an evening in Georgetown, near the American capital, at the prestigious Italian restaurant Milan. Put to a ...
5487
Read

You read the newspapers and you have the impression that sooner or later the Russian president will leave us - it is appropriate to say - in ...
6007
Read

The whole world knows the so-called "Gerasimov Doctrine" thanks to Mark Galeotti, one of the world's leading experts ...
5623
Read

Take a good look at this piece of paper: it is one of the thousands of flyers that the Turkish air force has rained down in the ...
4054
Read