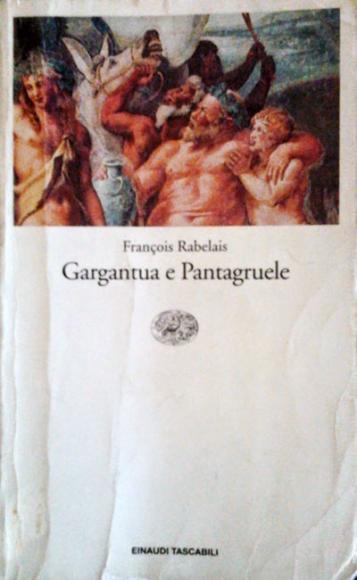 He knows Greek and Latin and in 1525, when the Sorbonne forbids the study of Greek to avoid reading the sacred texts in Greek and raising problems, he asks to go to the Benedictine order, where he could continue his studies and his readings. He later studied medicine and practiced as a doctor in several hospitals in Lyon. In 1542 he published "Gargantua e Pantagruele", the first of five books, the last of which came out posthumously in 1562.

The books are successful but they are condemned to the Index by the Sorbonne who judges them heretics. His books can certainly not be considered classics, in the texts in fact the most treated topics are sex, bodily functions, food and wine, seasoned by inventiveness of the author, in all fields, but also from his vast culture. But let's get to the text and let's start with a warning from the author. No warning was so appreciated by his readers and I report it in full:

"Readers friends, you who approach me, Free yourselves of all passion, And reading, do not be scandalized, Here you find no evil infection. It is also true that little perfection you will learn, if not for laughter: Another thing can not my heart expressing Seeing the mourning emanating from you: It is better to laugh than to cry to write, What a rider is above all a human thing. "

And in fact his immense and particular work, on so many occasions, if not laughter, makes you smile for double meanings, but it is not for everyone and it is not always easy to understand all the text if you do not have a large cultural background classical and linguistic type. In the prologue the author clarifies the point with a comparison between the Sileni and his work. The Sileni were small containers used in pharmacies to store medicines and spices. Containers on which funny and fantastic images were often depicted. The Sileni were precious, therefore, for their hidden content, not for the appearance. So according to the author, on closer inspection, his work is more precious than it may appear at a first reading.

Rabelais in his five books makes you smile but at the same time teaches, to those who are able to understand, using the difficult art of symbols.

Thus, through his strange characters: Gargantua, his son Pantagruel, Panurge and Giovanni, Rabelais explores the world of fantasy or reality, moving not only in the space of fantasy but also in time and languages.

Each chapter is full of ancient and modern knowledge (for the times), of inventiveness and linguistics, of popular wisdom and philosophy, of mysteries of the religions of the real world and of ridiculous characters or characters ridiculed by the author.

A huge and complex book that, in my opinion, cannot be missing in the personal library.

Jacopo Gualario Ed. Youcanprint, 2022 pp. 118 From the covid-19 pandemic crisis to the most recent armed conflict between ...
326
Read

Marco Rottigni, Andrea Danesi Visconti Published by the authors pages 224 The decadent world of the near future, a famous ...
527
Read

Giampiero Cannella Ed. Historica 2021 pp. 159 In recent years, especially among insiders, there has been debate ...
783
Read

Riccardo Lancioni Ed. Chillemi pp. 112 The Yom Kippur War was a highly technological conflict, in which the ...
1039
Read