Home News armed forces Terra Visit of the Chief of Staff of Di ...

Visit of the Serbian Chief of Defense for Kosovo 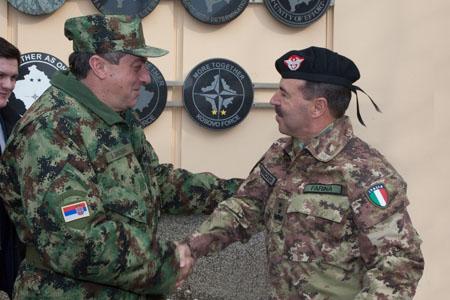 The Commander of the Kosovo Force (KFOR), General of Division Salvatore Farina, received yesterday, in the multinational headquarters "Film City", the Chief of Staff of Defense of Serbia, General Ljubisa Dikovic.

During their meeting the two Generals discussed the situation in the Balkans and Kosovo, paying particular attention to the northern area of ​​Kosovo and the importance of cooperation aimed at increasing security in the region. General Farina emphasized the improvement in the security sector after the agreement between Pristina and Belgrade, signed by the parties on the 15 April last year and confirmed the continuing effort of the NATO mission in Kosovo to support peace, cooperation and progress throughout the territory.General Farina he then underlined the importance of the cooperation between KFOR and the Serbian Armed Forces in patrolling along the administrative demarcation line between Kosovo and Serbia. The meeting is part of a broader agenda of scheduled appointments with representatives of the armed forces of the countries neighbors. General Farina, in fact, almost five months after the start of his mandate as commander of the Kosovo Force, has already been to Belgrade, Tirana, Skopje and Podgorica where he met the respective Chiefs of Defense Staff of Serbia, Albania, FYROM and Montenegro. At the end of their meeting, in highlighting mutually the fruitful results achieved so far, General Farina and General Dikovic went to the Decane monastery, still placed under the protection of the KFOR Troops, in the area of ​​competence of the Multinational Battle Group West with Italian command.

From 5 to 18 September 2022, the “Folgore” parachute brigade participated in the multinational exercise “FALCON ...
7174
Read

The multinational exercise Saber Junction 2022 ended in recent days at the Hohenfels base (GER), ...
1137
Read

The military ceremony for the return of the contingent took place in recent days in Piazza della Vittoria in Gorizia ...
821
Read

It took place in recent days, in the presence of the commander of the Terrestrial Operational Support Forces, general of ...
880
Read

It took place yesterday morning in the “G. Perotti ", in the presence of the commander of the Land Operational Forces of ...
1046
Read

180 aspiring marshals have crossed the gate of the Army Petty Officer School to face the ...
790
Read

Today, at the "Vittorio Bragadin" airport site, home to the 51st flock, the ceremony that took place ...
815
Read

An intense week ended in the late morning of last Friday for the Alpine Army Troops ...
4712
Read