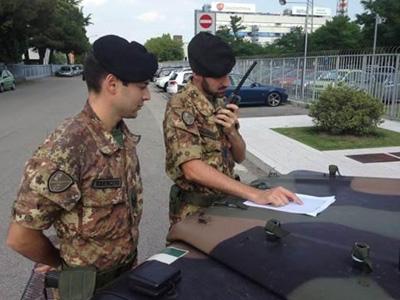 Last Sunday a mixed patrol composed of soldiers of the 2 ° regiment of genius breakers of Trento and personnel of the carabinieri weapon, stopped in a control action in the area of ​​the railway station, two individuals of Nigerian nationality for suspicious behavior within a public exercise.

In carrying out the check, the military found little more than a kilogram of marijuana and worked promptly, together with law enforcement personnel, for immediate arrest.

The Interregional-Northern Defense Forces Command, headed by the army corps general Bruno Stano, coordinates the seven army groupings which, distributed in 14 cities of the north-central (including Padua), cooperate with the police forces, as part of the "Safe Roads" operation in place since August 2008, to combat the fight against crime in the major urban centers of our peninsula.

Also this year the Army participated with an information stand in the well-known event dedicated to the world of comics, the...
290
Read