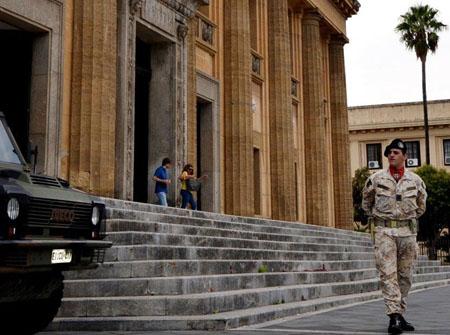 The intervention of the military of the "Aosta" brigade in service in the "safe roads" operation has averted the worst of two girls who, this night, were passing near the Court of Messina.

Around the 00.45, the patrol employed at the Court of Messina, noted, in via Tommaso Cannizzaro, crossing with the street Cesare Battisti, an individual who threw a girl on the ground and tugged another after kicking the vehicles parked and in movement.

The patrol immediately intervened, blocking the individual and, at the same time, called the police. Two patrols arrived on the spot and an ambulance took delivery of the attacker.

The intervening soldiers belong to the 5 ° Aosta Infantry Regiment and operate under the grouping of Eastern Sicily and Calabria under the orders of Colonel Luigi Lisciandro.

The "Safe Roads" operation aims to ensure better control of the territory and greater security of citizens through vigilance to sensitive sites and patrolling and patrolling activities conducted jointly with the Police Forces.

The international exercise 'Cerces 2022' has ended, which saw the participation of a unit of the brigade ...
4069
Read

The "agreement for the collaboration...
296
Read

The Baptism ceremony took place at the "Pietro Teulié" barracks in Milan, site of the homonymous military school...
499
Read

In recent days, a survey was conducted at the Joint Forces School for Nuclear, Biological and Chemical Defense ...
394
Read

The "Freccia" exercise, which began on 4 October last, of the Army's anti-aircraft units deployed ...
1938
Read