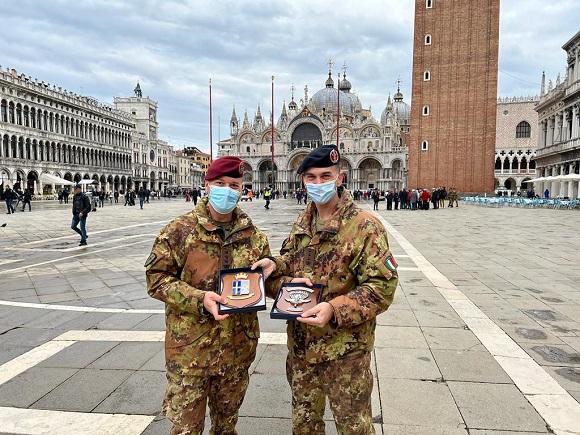 After about six months of operational use, the 33rd EW regiment of Treviso, led by Colonel Ettore Pontiroli, gives the command of the "Veneto" group to the 8th regiment of genius gustatory paratroopers "Folgore" of Legnago (VR), commanded by colonel Fabio Mariano.

In the last six months, the more than 200 men and women of the group have been involved in competition and in close coordination with the Police for the surveillance of over 80 sensitive sites in the cities of Treviso, Padua, Verona, Vicenza and Venice in order to to counter and prevent criminal acts and terrorism together with the control activities of government measures to contain and contrast the spread of Covid-19.

Over 7000 patrol activities, 3000 identified people, 10 reported and 8 arrested, 40 controlled vehicles, fight against drug dealing, seizure of weapons and numerous ordinary interventions to rescue citizens along roads, railway stations, the squares, the airports: these are the numbers of the "Safe Roads" operation, during the period at the helm of the 33rd EW regiment of Treviso.

These numbers certify the commitment of the Italian Army, an effort paid off daily by the certificates of esteem and gratitude received by the prefectural authorities and by the representatives of local authorities, but above all by the sense of gratitude shown by the resident population.

It ended in recent days, between the limestone walls of the "Budinetto" of Cala Gonone (NU), in the National Park of ...
5645
Read

Over fifty sharpshooters from different units of the Army, State Police and Allied Armies have ...
4712
Read