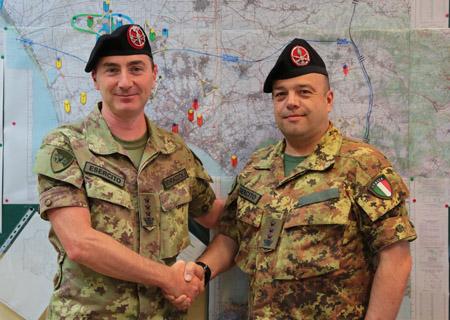 Tonight there will be the transfer of responsibility for the "Campania" group for the "Safe Roads" operation and the "Terra dei Fuochi" requirement, Colonel Nicola Gorgoglione, commander of the 32 ° wagon regiment of Tauriano (PN), will pass the responsibility to Colonel Massimo Bendazzoli, commander of the 10 ° regimental genius regiment of Cremona.

Colonel Bendazzoli's engineers have been reinforced by assets from the "Ariete" brigade (5 Lancieri regiment of Novara di Codroipo, 8 transport regiment of Remanzacco, 132 "Ariete" armored artillery regiment and "Ariete" logistic battalion of Maniago) and by the "Garibaldi" brigade for patrols in the "Land of Fires" (8 ° bersaglieri regiment of Caserta).

The 32 wagons regiment from April 11 to date, overall performed more than 7500 patrols, checked more than 16000 people and 9000 vehicles, seized more than 150 vehicles, handed over to the police over 50 people caught on abandon waste and intervened on over 100 waste fires.

The work carried out by the army in the "Terra dei Fuochi" is part of the operational activities of the "Campania" group within the "Safe Roads" operation, coordinated by the 2 commandos of defense forces (2 ° FOD) of San Giorgio a Cremano (NA), under the command of army corps general Vincenzo Lops, responsible for the approximately three thousand soldiers deployed from Rome to Lampedusa in collaboration with the police to fight organized crime.

There are about 4000 military soldiers who since 4 August 2008 have been employed throughout the Italian territory in collaboration with the police in the national operation "Safe Roads" in patrolling and surveillance activities for sensitive targets, metropolitan areas , to the identification and expulsion centers (CIE) and to the Assistance Centers for Asylum Seekers (CARA). Since August 2008, the start of the operation, the army has contributed to the seizure of more than 2 tons of drugs, over 560 weapons, almost 12.000 vehicles, more than 14.000 arrests and control about 1 million 900 thousand people and over XNUMX million of means.