Home News armed forces Terra Solidarity of the brigade "Sassari" with the ...

Solidarity of the "Sassari" brigade to the flood victims 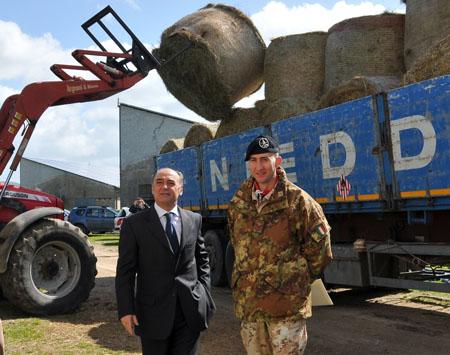 In the morning of today, the donation of 120 quintals of hay to the municipality of Uras (OR), identified by the brigade "Sassari" as one of the municipalities most affected during the last flood in Sardinia and in need of support, was concluded.

The "Sassarini", collecting the request for help from the first citizen, positively concluded the coordination activity with all the associations and companies / companies that allowed the solidarity operation.

The donation was promoted by FASI (Federation of Sardinian Associations in Italy) which found great availability in the Municipality of Asiago (VI), whose territory is linked to the history of the "Sassari" Brigade for the events of the First World War , and it was made possible thanks to the great generosity of the Coldiretti farmers of the Plateau who donated their fodder to their Sardinian friends.

The solidarity operation has seen the involvement not only of the "Sassari", but also of the volunteers of the Sovereign Military Order of Malta, of the Cisom (Italian Relief Corps of the Order of Malta), of the Order of Saints Maurice and Lazarus, of the Tirrenia Italian Company of Navigazione spa and of Logistica Nieddu Srl that have allowed the free transport of the cargo.