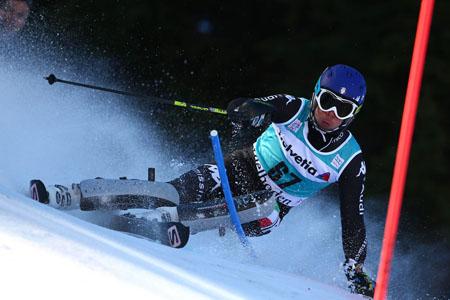 A resounding victory that of the Roman athlete belonging to the Winter Sports Section of the Army Sports Center both for the placement that marks his best career result, and for being able to get behind with an advantage of 48 cents Henrick Kristoffersen, the athlete Norwegian who won the Schladming slalom (AUT) at the end of January 2014.

To complete the podium he was another prestigious athlete, the Swiss Luca Aerni who was separated by 59 cents.

Having touched on the victory in one of the last events of the same race circuit, Giordano Ronci continues to grow, adding a heavy victory to the already numerous titles won despite his young age (class' 92): FIS gpi, Fis race, young Italian titles , podium for absolute Italians and debut in the world cup.

Thanks to the result he has just achieved, Ronci will be called for the special World Cup slalom scheduled for 9 in March 2014 in Kranjska Gora (SLO) where he will start with advanced positions thanks to the points he has just earned in the European Cup.

The "European Wind" exercise represents the culmination of an intense training cycle, planned and directed by ...
3695
Read

In recent days, the basic mountaineering course was completed in favor of two reconnaissance platoons of the 173rd brigade ...
7742
Read

With the ceremony of delivery of the green beret and the winged lion, symbols of the youngest specialty of the ...
5589
Read

It ended in recent days, at the PACUB (Combat Training Course in Populated Centers ...
1413
Read

The "Trident Maris 2021" exercise conducted by the anti-aircraft artillery departments of the ...
1358
Read