Home News armed forces Land In memory of the sacrifice of the physical soldiers ...

In memory of the sacrifice of Sicilian soldiers 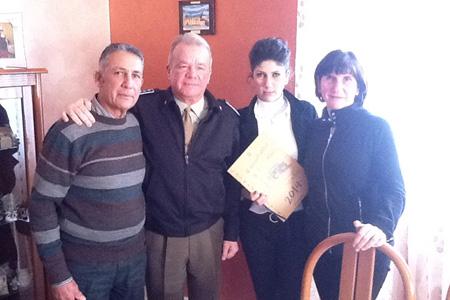 Yesterday, the Commander of the Southern Military Region, General of the Corrado Dalzini Army Corps, wanted, once again, to emphasize the closeness of the Institution to its fallen and wounded soldiers in the fulfillment of duty, promoting a moment of meeting with some of Sicilian families who have suffered the sacrifice of their children.

In an effort to instill confidence, awareness and a sense of belonging in all the Army personnel, the General has chosen three families, one for each coast of the island, in a symbolic embrace to all the families of Sicilian soldiers. a "tour de force" that engaged him all day, General Dalzini first went to Barcellona Pozzo di Gotto, in the province of Messina, where he met the relatives of Major Giuseppe La Rosa, who died in Afghanistan last 8 June; subsequently, in Cassibile (SR), he met the Cicciarella family, whose thirty-year-old son, Alessandro, passed away a little more than a year leaving a wife and a child of 3 years; and then ended his tour in Gela, on the southern coast of the island, where he met the family of Chosen Major Caporal Monica Contrafatto, wounded in Afghanistan in the 2012. "I consider it important - said the General - to maintain strong ties with these people who most of all know the harsh reality in which men and women are often called to work with stars and I believe it is a duty, as well as an honor, to convey to them the sense of communion and affection of the Armed Forces. "

The "European Wind" exercise represents the culmination of an intense training cycle, planned and directed by ...
3654
Read