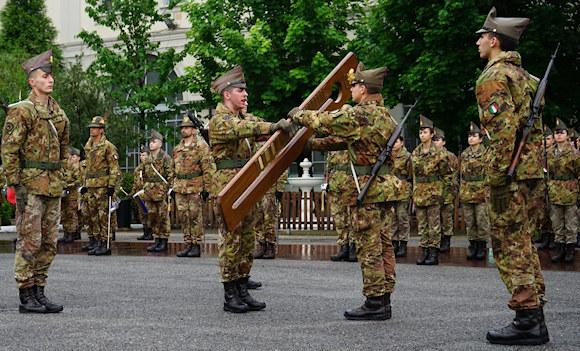 It took place in the courtyard of the 1st Tricolor of the Teuliè Military School of Milan, in the presence of the Institute Flag, the Banner of the City, decorated with the Gold Medal for Military Valor and the Banners of the Lombardy Region and that of the Metropolitan City of Milan, the symbolic passage of the cue between the students of the “Camozzini III” course to the “Buffa di Perrero III” course in the presence of Major General Davide Scalabrin, commander of the Military Academy of Modena.

To welcome civil, military and religious authorities, as well as the families of the students, the commander of the Institute Colonel Gianluigi D'Ambrosio. The military ceremony is the moment in which the students greet with the honor of the School that educated them, the officers and teachers who followed them during their training process and the city of Milan that hosted them.

The event continued with the "Gran Ballo del Mak π 100", a gala evening that marks the entry into society of girls aged between 17 and 19, which saw the participation of 44 pupils of the 5th year of high school, now close to the baccalaureate.

The Mak π 100 represents the last step of an intense and demanding growth path carried out by the students of the “Teulié” Military School; in fact, today, the students of the "Camozzini III" course, with the symbolic "passage of the cue", pass on to the "incoming" course the responsibility of honoring and transmitting the traditions that have always distinguished the history of the Milanese military institute.

After two years of forced break due to the health emergency from Covid-19, it was held at the School ...
87
Read

In recent days, in Caserta, Trapani, Cosenza, Altamura and Teulada, at the Bersaglieri regiments of the COMFOP Sud, ...
343
Read

An opportunity for cultural study as well as for the dissemination of geographical knowledge saw the protagonists ...
275
Read

In the period from 14 to 16 June, the exercise of the "National Military Observation Network and ...
155
Read

Last Monday, at the Hohenfels base (GER), the multinational exercise Combined Resolve XVII ended, at ...
1988
Read

Today we celebrate the anniversary of the Artillery Weapon, symbolically connected, for historical facts, to the battle ...
5279
Read