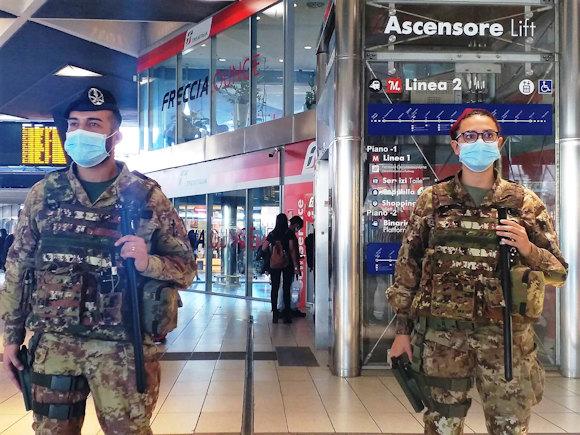 Yesterday morning a patrol of the "Campania" group employed in the "Safe Roads" operation, during the patrol activity at the ticket office of the Naples railway station, noticed a man lying on the ground, struck by illness.

The soldiers of the Italian Army, wearing suitable personal protective equipment, intervened immediately providing assistance while awaiting the arrival of the 118 health personnel on the spot.

The victim, despite the state of malaise, was able to indicate that he needed to take a drug he had in tow and the military, noting the gradual worsening of the man, proceeded to facilitate the administration of the drug.

The 118 personnel arrived at the scene and found that the man, of Italian nationality, traveling from the province of Lecce, without the prompt intervention of the patrol could have entered a coma. The health workers therefore congratulated the Army soldiers for the timing and reaction capacity that characterized the intervention, while the man, as soon as he recovered his strength, expressed his deep gratitude towards the soldiers who intervened. thanking them for the relief work received.

Inside the Court of Honor of the Military Academy and in the presence of the commander for training, ...
233
Read

The Cavalry of the Italian Army originates from the Savoy cavalry in which the first regiments of order "...
238
Read

The 5th Engineers Regiment, unit stationed in Macomer framed in the Sassari brigade, which has its origins in the ...
242
Read