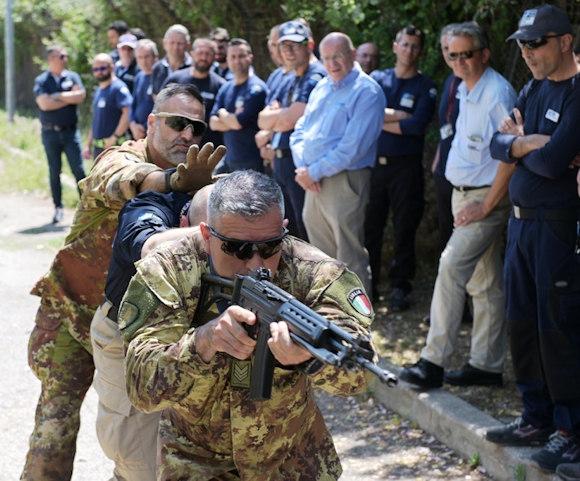 In recent days, at the NATO Support and Procurement Agency (NSPA) Southern Operational Center (SOC) of Taranto, was organized and conducted by a team of military instructors of the Army, the Civilian Pre-Deployment Training (CPDT) addressed to NATO personnel.

Regulated according to the standards addressed to NATO civilian personnel and considered as a fundamental and mandatory step on the premise of a job in operation, the CPDT was directed to 38 units of the SOC of Taranto who, under the guidance of the instructors of the mechanized brigade "Pinerolo", they carried out a training activity divided into five days.

NSPA staff participated in twelve theoretical and practical modules, taught by Army personnel, focused on subjects such as personal safety and knowledge of the threat, radio communications, topographic orientation with paper and GPS, first aid, contrasting the IED (Improvised Explosive Device) threat, knowledge of cultural differences, negotiation, security procedures within a base, methods with the escort and protection team and, finally, the reaction to capture, imprisonment and interrogation.

At the end of the course, words of satisfaction were expressed by the commander of NSPA SOC who said he was extremely proud of the important result achieved thanks to the quality, level of preparation and professionalism of the instructors of the “Pinerolo” brigade.