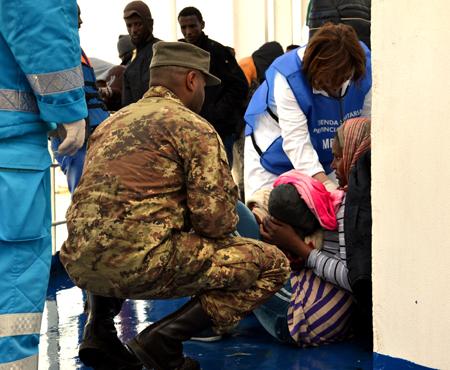 The presence of an Italian Army soldier with knowledge of the Aramaic language for a young immigrant landed in Lampedusa was invaluable.

This morning, during a landing on the island of Lampedusa, first aiders noticed a pregnant woman trying to communicate to receive treatment.

Among the personnel of the Army, who had been employed to guarantee a security framework, there was also the cultural mediator, Major Caporal Major Behabtu Robel, who approached the lady and understood that he spoke Aramaic.

The graduate was found to be essential for the rescue and the first treatment of the lady for the control of pregnancy, which was 25 weeks.

The Army cultural mediators are employed in Lampedusa as part of the "Safe Roads" operation underway since August of the 2008. Their task, in addition to guaranteeing the safety of the First Aid and First Aid Center, is also to provide assistance to immigrants. The contribution offered to immigrants and, consequently, to rescuers has often proved to be indispensable in order to avoid dangerous situations.
The soldiers operating in Lampedusa are classified as part of the Western Sicilian Roads grouping under the command of Colonel Marco BUSCEMI.

The international exercise 'Cerces 2022' has ended, which saw the participation of a unit of the brigade ...
4137
Read