Home News armed forces Terra The 85 ° "Verona" honors its fallen on the mon ...

The 85 ° "Verona" honors its fallen on Mount Pasubio 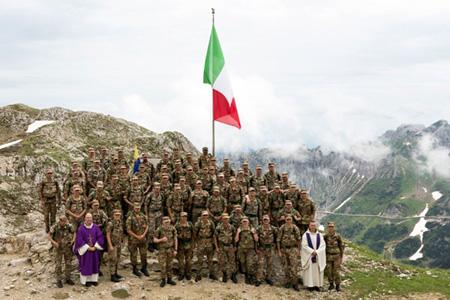 The 85 ° "Verona" volunteer training regiment celebrated its body festival on Monte Pasubio (Vicenza) yesterday, honoring the fallen with a Holy Mass in the small church of Santa Maria, located near the sacred area of ​​the massif.

The regimental commander, Colonel Gianfranco Giuseppe Francescon, and a representative of the unit's officers, non-commissioned officers and graduates traveled the "Strada delle 52 Gallerie", a mule track excavated by Italian miners in the 1917, more than six kilometers long, of which more than two representatives of the sections of the UNUCI of Verona and of the ANA of Vicenza, staff of the command unit for training units (RUA) and of all the dependent units also took part in the gallery and at the ceremony.

Framed in the "Verona" brigade, the 85 regiment participated in the 1 world war fighting on the front of the Julian Alps and on the Asiago plateau.

In particular, the 2 July 1916 distinguished itself in the furious battles of Mount Pasubio, rejecting the violent and repeated enemy assaults, as part of a planned attack by the Italian high command as a response to the Austro-Hungarian offensive of the months of May and June, called " Strafexpedition ”(punitive expedition).

For these feats of arms, where the infantrymen of the 85 ° "fought as brave", in the 1920 the regiment was awarded the silver medal for military valor.