General Serino meets the commander of the Brazilian Army 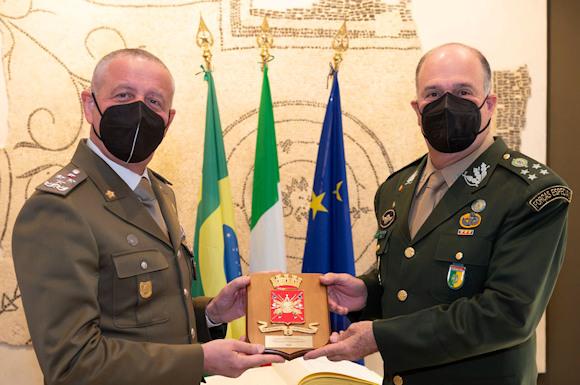 After the surrender of the honors, the visit continued with an office call and a briefing in the Montezemolo room to provide an update on the respective Armed Forces. During the meeting, which took place in an atmosphere of cordiality, the two commanders underlined the importance of collaboration between the Italian and Brazilian Army and the cooperation in 3 UN / EU operations: UNIFIL (United Nations Interim Force in Lebanon) , MINURSO (Mission des Nations Unies pour l'Organisation d'un Référendum au Sahara Occidental) and EUTM RCA (European Union Training Mission in Central African Republic), to support the stabilization process, increase the capabilities of the Armed Forces and security of the local population. Furthermore, for the occasion, the availability of the Italian Army to support the training of Brazilian personnel in its facilities was highlighted, thus renewing the training offer already provided in past years and exploring new areas of cooperation, as well as new courses of training on wheeled vehicles in use or for future use by the two Armies.

The visit ended with the signing of the Roll of Honor and the exchange of gifts, during which the commander of the Brazilian Army thanked Italy and the Army for their hospitality and confirmed the excellent relations between the two countries.

Also this year the Army participated with an information stand in the well-known event dedicated to the world of comics, the...
142
Read