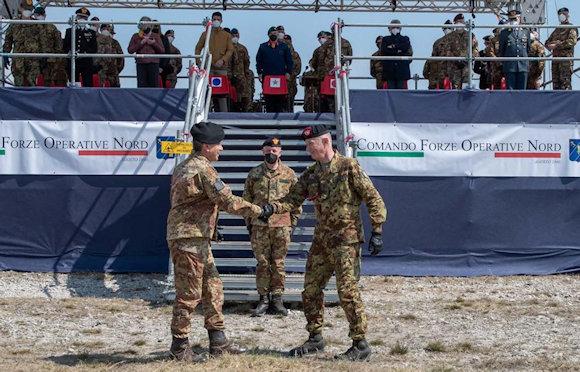 Today, in the presence of the Army Chief of Staff, Corps General Pietro Serino, the alternation in command of the Northern operational forces between Corps General Roberto Perretti, who simultaneously leaves after forty-four years of active service, and the parigrade Salvatore Camporeale.

The handover took place at the Cellina-Meduna training area (Pordenone), at the end of the "Lamarmora 22" exercise, conducted by the 132nd "Ariete" armored brigade which deployed the Permanent Training Companies (PTC) of regiments under it, as well as specialized assets and support units.

The exercise also provided the opportunity for General Perretti to present the project to use the training simulation to the Army Chief of Staff. The Chief of Staff of the Army, in his speech, highlighted the valuable results obtained by General Perretti in his period of command, expressing appreciation and esteem for the determination and effectiveness of his work. “I'm excited, because Roberto is, in order, a colleague, but first of all a great friend. In 1978 we started, without knowing and unaware, a parallel path that has brought us here today, in the most beautiful place for those who love this profession; which is a choice: to dedicate one's entire existence to our country, because this is our mission ". 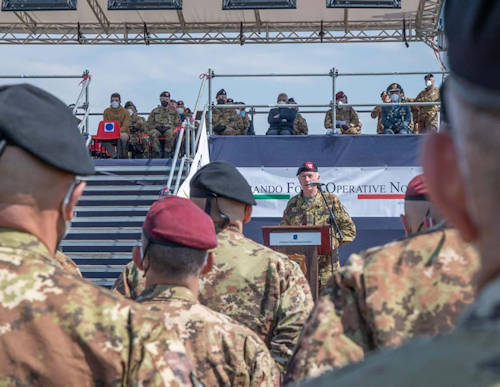 General Perretti, who had assumed command of the northern operational forces on 24 February 2020, thus wanted to take stock of this period. “The exercise that preceded this moment of transfer of command well represents the philosophy and vision of my period of command. The raison d'être of the Army is the armed defense of the homeland and, in peacetime, training is its main activity. Competitions to other institutions, unarmed interventions are very important tasks but not the priority for the Armed Force. We must avoid that a wrong message reaches our staff. Strade Sicure, non-operational competitions, emergency transport are a necessary and essential contribution to the community, but they are not the mission of our units as well stigmatized by the head of SME recently ".

Addressing the commanders and non-commissioned officers of the corps, he continued: “Take my grateful thanks to your units and commands. What we have achieved is thanks to them: the northern operational forces are a multicentric reality, the units are not "peripheral" but the center that develops an operational, territorial and infrastructural capacity; the essence of the units are the soldiers (women and men of various grades but all soldiers), whose ethical, moral values ​​and purity of soul are the strength that - if and only if - equipped with modern and efficient materials and means , and a regulatory body and a suitable legal framework, can ensure the country the ability to defend itself. "

General Perretti then addressed to General Camporeale the hope of good work, wishing him to reach, during his period of command, important and prestigious goals. 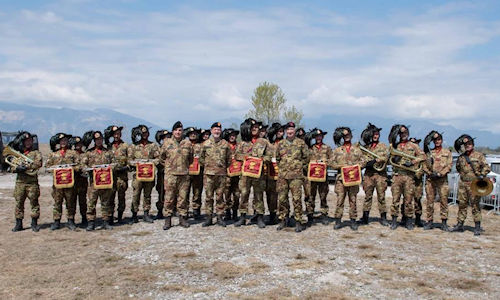 The Northern Operational Forces Command is a multifunctional high command of the Army based in the "Oreste Salomone" barracks in Padua, whose origins date back to August 1860 with the establishment of the 14th Army Corps. It counts about 3 thousand effective, framed in a division command ("Vittorio Veneto"), 5 combat brigades ("Ariete", "Folgore" and "Pozzuolo del Friuli"), 5 territorial commands (CME "Emilia-Romagna", " Friuli Venezia Giulia "," Abruzzo-Molise "," Marche "," Umbria ") and 5 infrastructure departments (6th of Padua, 7th of Bologna, 12th of Florence, 7th of Udine and Section. Detached Autonomous of Pescara ). It has an area of ​​responsibility and intervention distributed over 41 administrative regions and XNUMX provinces, with a structure that assigns functions in the operational, territorial and infrastructural sectors to a single commander.

Army Corps General Salvatore Camporeale, incoming commander, comes from the Army Training, Specialization and Doctrine Command (COMFORDOT) which he led from November 2019 until recent days. Among the main positions, he was deputy commander of the NATO "Resolute Support" mission in Afghanistan, Commander of the Military Academy of Modena and commander of the 132nd "Ariete" armored brigade.

In his address, the Camporeale general thanked the head of EMS “For the trust placed in me by entrusting me with the command of the Northern operational forces. A new challenge that I face with the same, unchanged passion with which I started my life as a soldier. To my predecessor, Corps General Roberto Perretti, certain of interpreting the sentiments of all the personnel of the Northern operational forces, I extend my sincere thanks for what has been done, with the commitment to continue his far-sighted command action. Sincere wishes for the most beautiful and deserved satisfactions after so many years dedicated, without saving energy, to the Institution. "

At the end, as the final act of his active service in the Army, General Perretti, accompanied by the commander of the incoming northern operational forces, went to the Military Memorial of Redipuglia to pay homage to the fallen of the III army of which the COMFOP North preserves the memory.

Also this year the Army participated with an information stand in the well-known event dedicated to the world of comics, the...
113
Read

The oath of the officers of the 36th course of the reserve took place in the Aula Magna of Palazzo Arsenale...
4913
Read